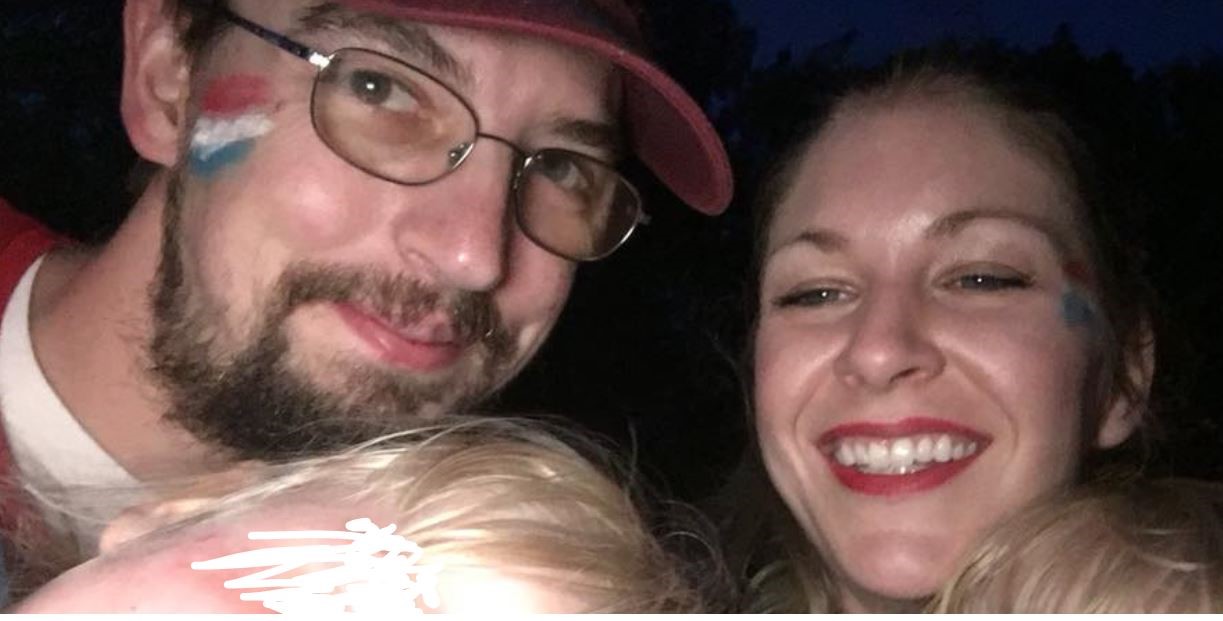 At the end of last year, we informed the Eugene, Oregon community of a neo-Nazi couple, Matthew Combs and Bethany Sherman, living near the heart of downtown Eugene at 1177 West 11th Avenue. Since Combs and Sherman fled Eugene to southern Oregon, we have observed a steady coming and going of neo-Nazis and white nationalist sympathizers occupying the house owned by Bethany Sherman on West 11th Avenue. Early this past summer, we reported on Matthew Brien Stafford, an “esoteric Hitlerist” from the Seattle, Washington area, who took up a brief residence at the house before leaving town in his white van. Shortly after his departure in late summer, a new couple moved in, fresh from Alabama. We recently learned of their detailed white supremacist views and were not surprised that Combs and Sherman, yet again, made their house available to violent white supremacists. Christopher Alan Kilgore (birthdate: 12/30/84) wasted no time in immersing himself in the violent, fascist rallies hosted by Vancouver, Washington resident Joey Gibson of Patriot Prayer. On social media, Christopher details his plans and motivations to travel from Sacramento to Seattle, to Colorado and even Washington D.C. to attend similar fascist magnet rallies. His wife, Stephany Michelle Kilgore, (birthdate: 5/18/87) publicly expresses her similar white nationalist views that she shares with her husband and has taken on the “trad waifu” role of stay-at-home-mom, pregnant with their third child, and discouraged from seeking employment from her husband who likely survives off a military veteran’s pension. 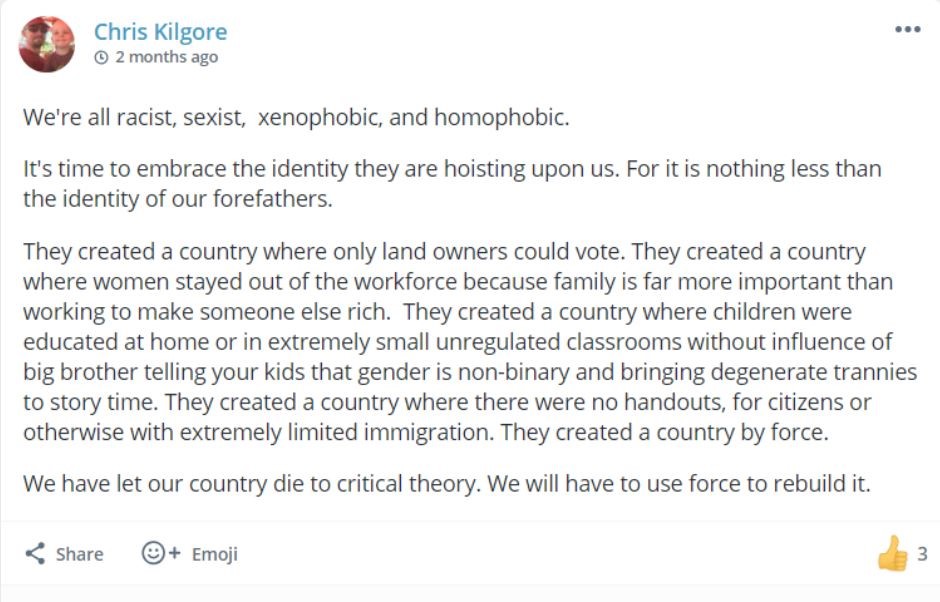 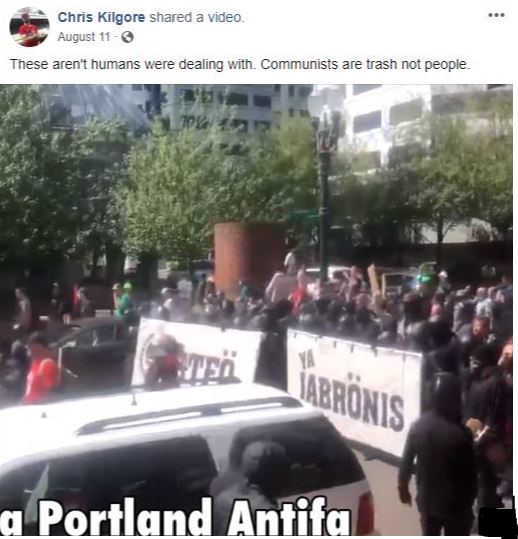 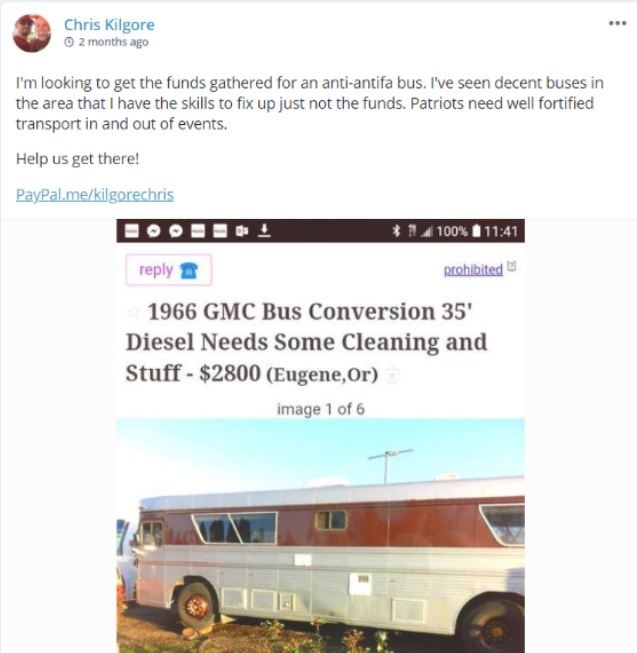 Christopher Alan Kilgore has two Facebook accounts through which he connects with other fascists and shares fascist memes and imagery. One account is held under his name, and is connected to a number of Pacific Northwest Proud Boys and white nationalists associated with American Guard, a group which Patriot Prayer henchman Tiny Toese shared his support for. American Guard was founded in 2016 by hardcore racist skinhead Brien James, who is Facebook friends with Kilgore. Christopher’s profile contains far-right conspiracy theories and white nationalist memes. In addition to this account, he maintains a secondary profile under the name ‘Thorium Vain.’ This account features even more openly racist, anti-Semitic, and xenophobic content. He frequently shares his admiration of Augusto Pinochet, the former Chilean dictator responsible for political executions. His ‘Likes’ include White Dragon Dojang, the brand belonging to Andrew Allwander, 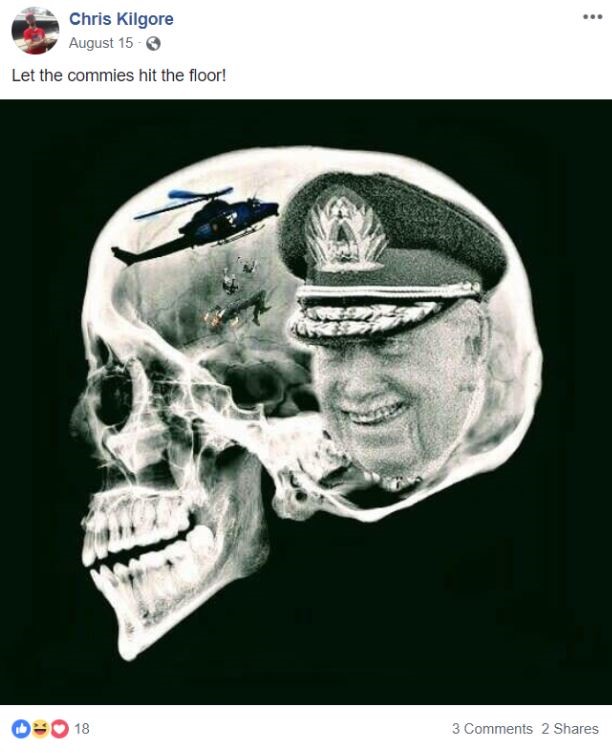 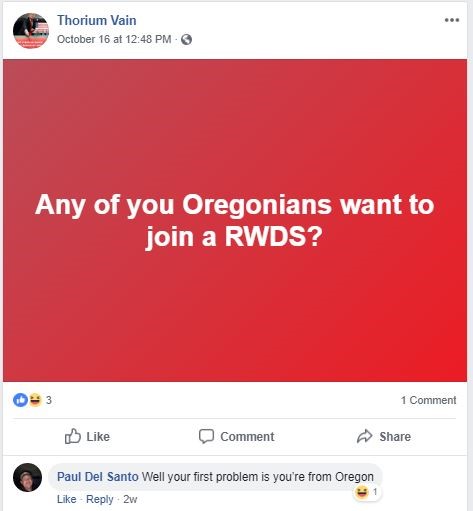 RWDS is an acronym for “Right Wing Death Squad” which are groups that advocate for killing Jews and Blacks. 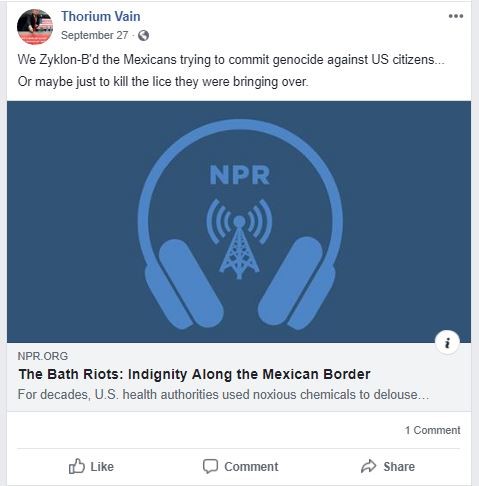 This racist statement by Kilgore references Zyklon B, a pesticide used by Nazi Germany during the Holocaust to murder approximately one million people in gas chambers installed in extermination camps. 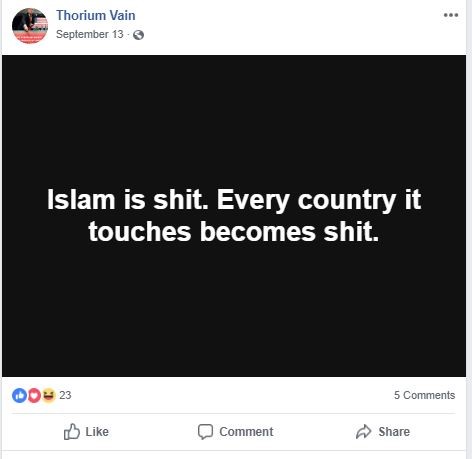 Christopher Kilgore aka “Thorium Vain” advocates for the death of communists and admits premeditation for physical violence that might result in his jail time.

Alongside his Facebook accounts, Kilgore possesses an account on the alternative platform MeWe favored by the far right. His account is conveniently named Chris Kilgore, and is closely connected to other white nationalists, including many American Guard members. On MeWe, he promotes his fundraiser pages. In a Facebook post, Chris promises a full transition to Gab, once it is back online. Gab is a website long used by white supremacists, which was recently taken down after user Robert Bowers murdered congregants of a synagogue in Pittsburgh.

On September 2, 2018, Chris Kilgore uploaded photos to ‘Thorium Vain’ that show a minivan with ‘Nazi’ spray painted on it. The photos were also circulated on his partner Stef Kilgore’s account. In a comment, Stef suggests that they were targeted because the previous residents of the house were “doxxed.” Stef and Chris Kilgore are living at 1177 West 11th Avenue, a house previously occupied by Bethany Sherman and Matthew Combs, who fled Eugene after their white nationalist beliefs and connections were made public. Matthew Combs was closely tied to the violent neo-Nazi group American Front. The property has become a hub for white nationalists.

The Kilgore van with Alabama and veteran license plates parked in front of Bethany Sherman’s house on West 11th Avenue in Eugene, Oregon. 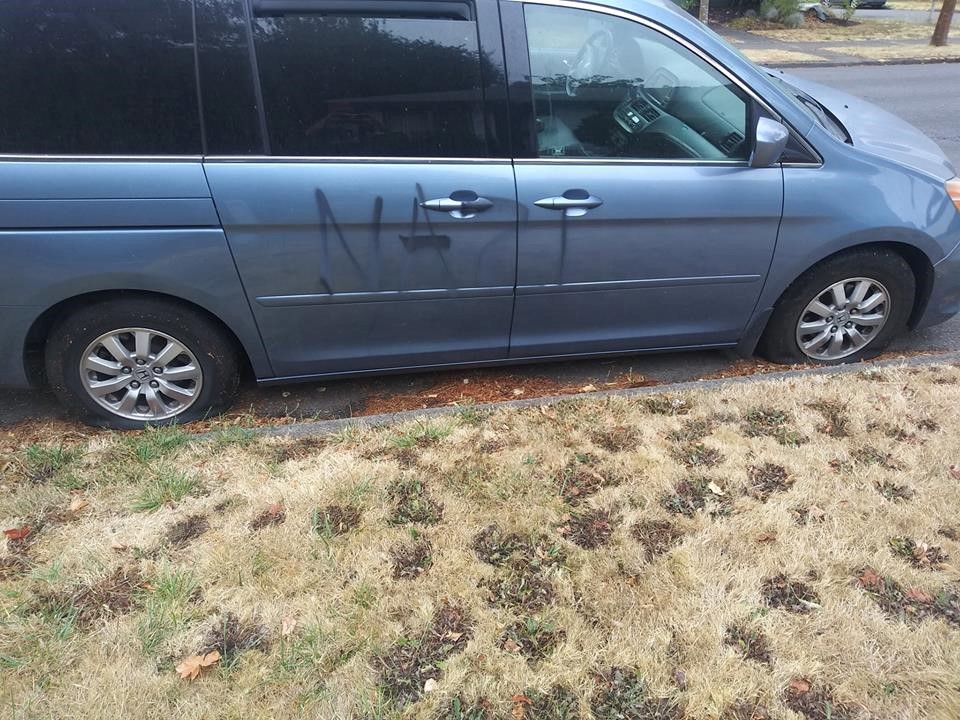 On Facebook, Chris and Stephany shared photos of their van with four flat tires and the word “NAZI” 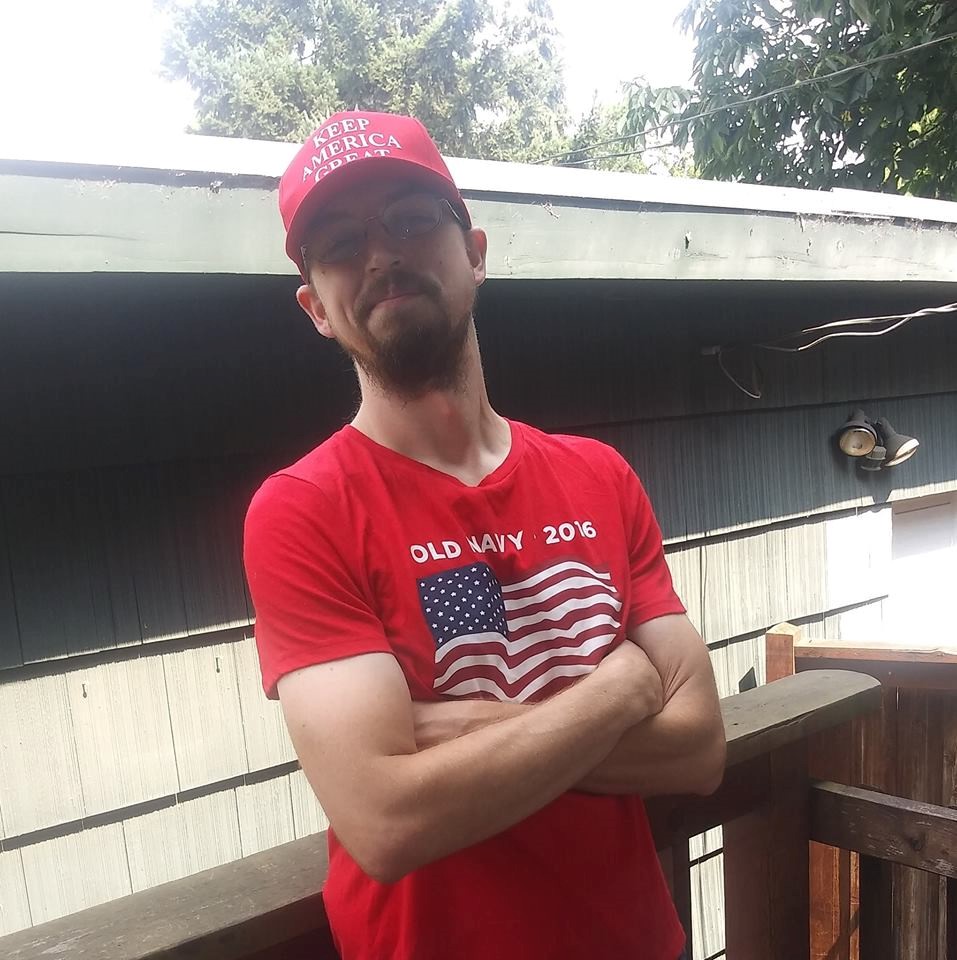 Christopher Kilgore expresses his nationalist views via his wardrobe 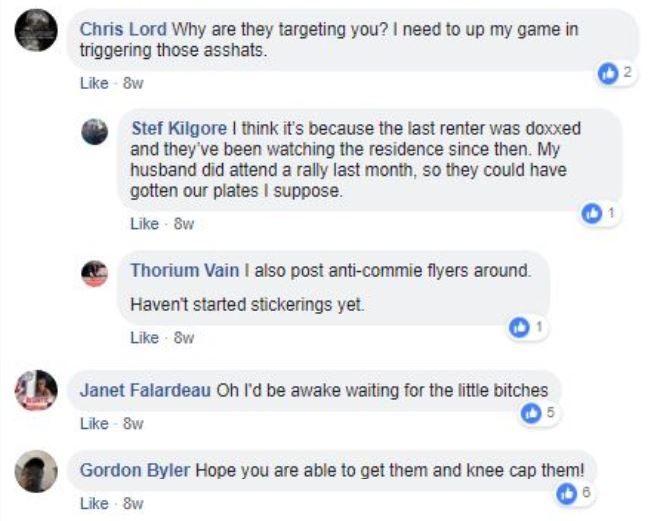 Stephany suggests that it could be known they live in Bethany Sherman’s house. Christopher aka “Thorium Vain” confesses that he posts anti-communists flyers around Eugene.

Christopher aka “Thorium Vain” suggests that he cannot be evicted because his landlords share his white supremacist ideology. He also suggests that his income is related to his military veteran status. He also confesses to having anger issues

An example of Stephany Kilgore’s insensitivity to racial slurs against Blacks. 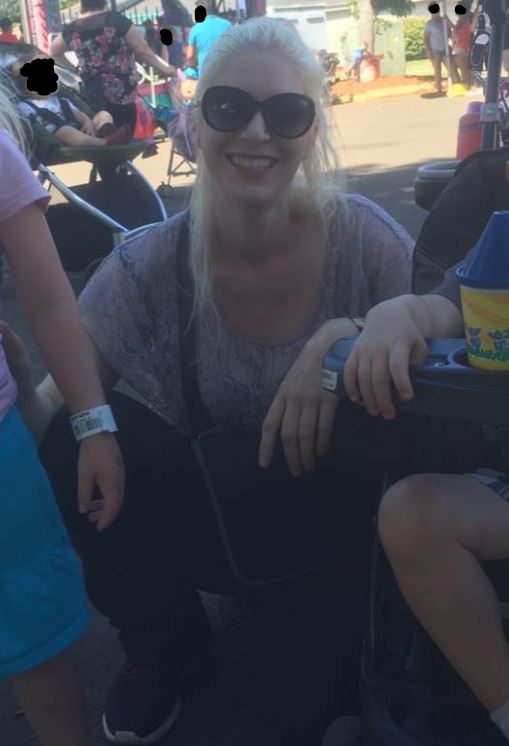 In one Facebook post, Stephany Kilgore claims that Google is overacting to Patrick Little, the neo-Nazi who has been traveling across the country filming himself conducting anti-Semitic stunts. 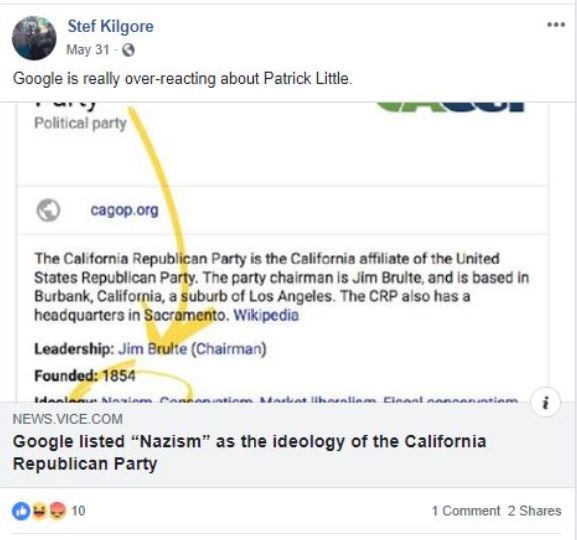 Patrick Little, a former Sergeant in the Marines, is a failed candidate for the United States Senate in 2018 (he received over 60k votes). Since losing the primary, Patrick Little has been traveling the country on what he calls his “Naming the Jew” tour. He was seen on street corners across the country with handmade signs, some of which denied the Holocaust while others exclaimed “Expel The Jews.” In the Bay Area, he attempted to fly a blimp exclaiming “Jews Rape Kids.” Patrick Little is also a prolific poster on Gab. Recently, Microsoft threatened to de-host Gab after Little suggested Jews should be raised as livestock. Currently, he is attempting to coordinate “It’s OK To Be White” protests across the country. 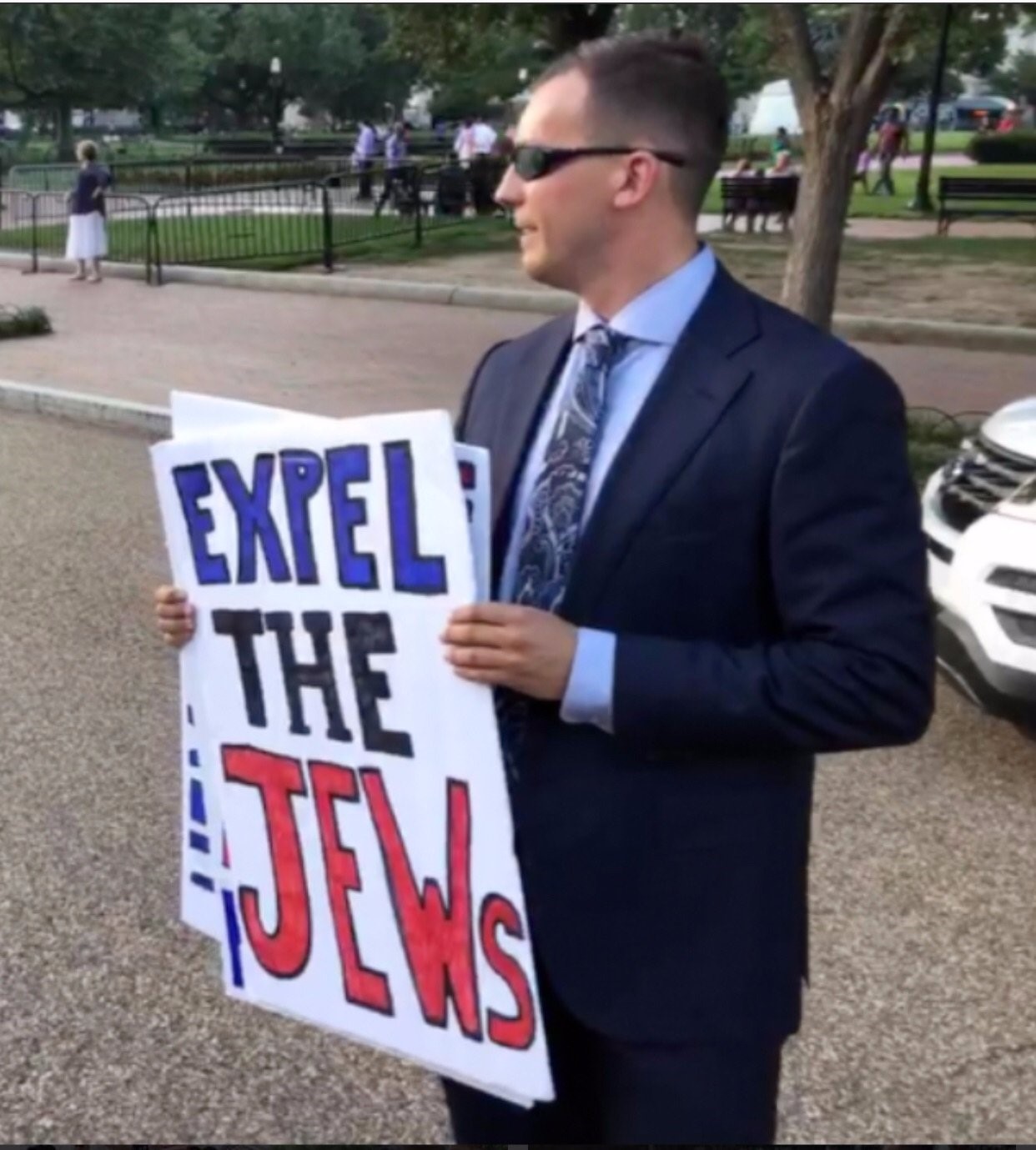 Some neo-Nazis wear ties. Patrick Little spreading his message of hatred for Jews. 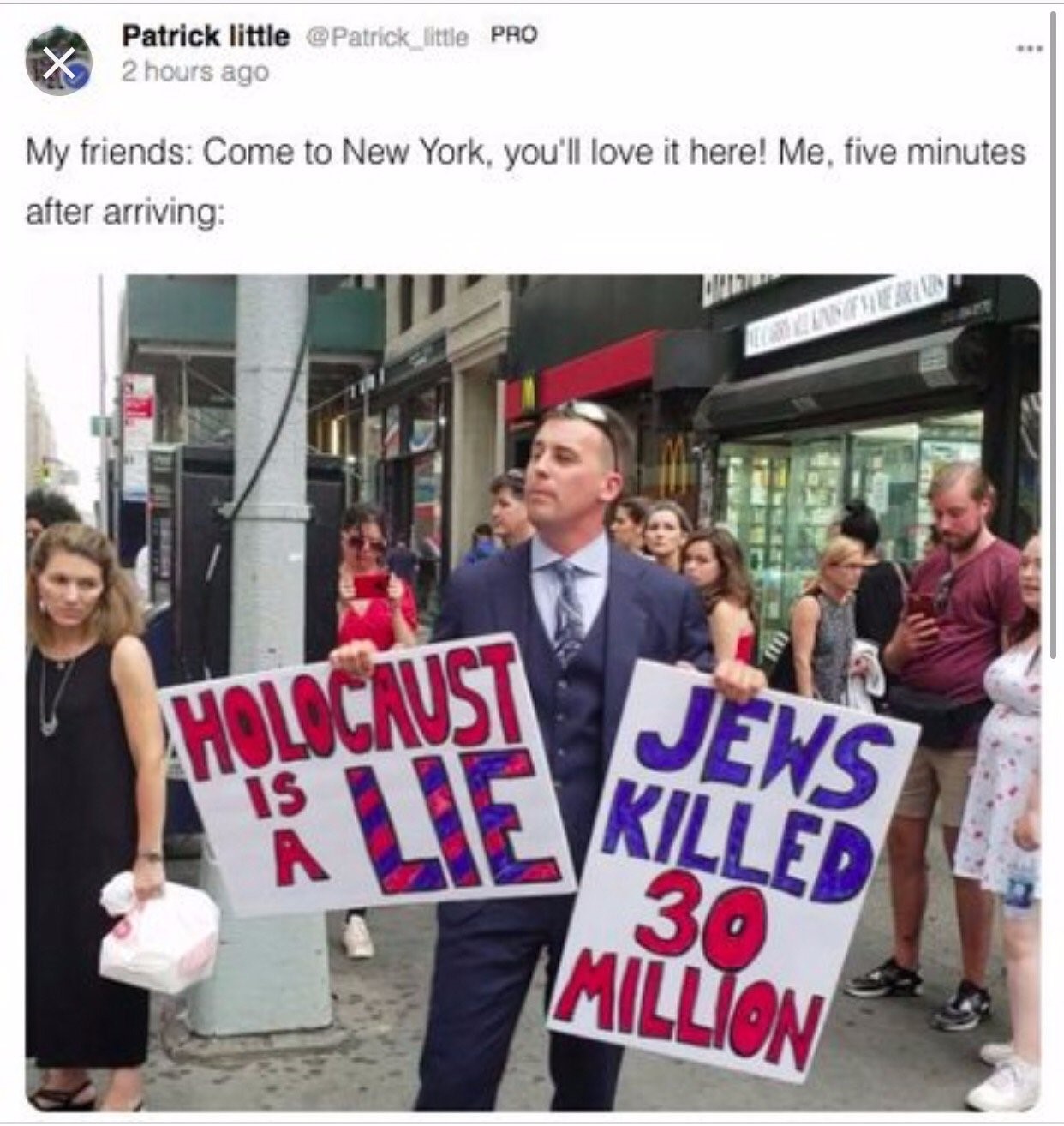 Patrick Little is a Holocaust denier.

On August 5, 2018, Christopher Kilgore created a page on Facebook titled ‘Veterans against Domestic Terrorism.’ The page is linked to a GoFundMe, where he boasts the large membership (Two people) and incentivizes donors by promising videos of himself pepper sprayed. Kilgore intends to gather funds to enable him and Alan Swinney to travel across the country to attend far right events and attack antifascists. 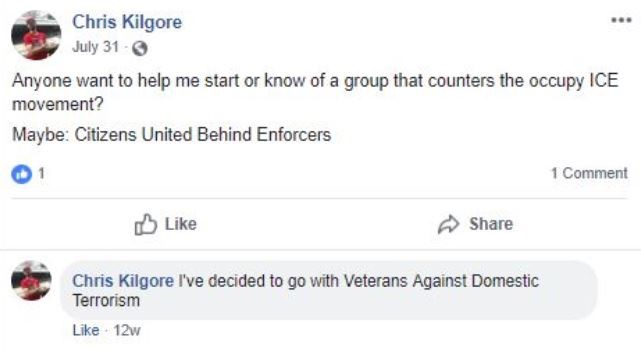 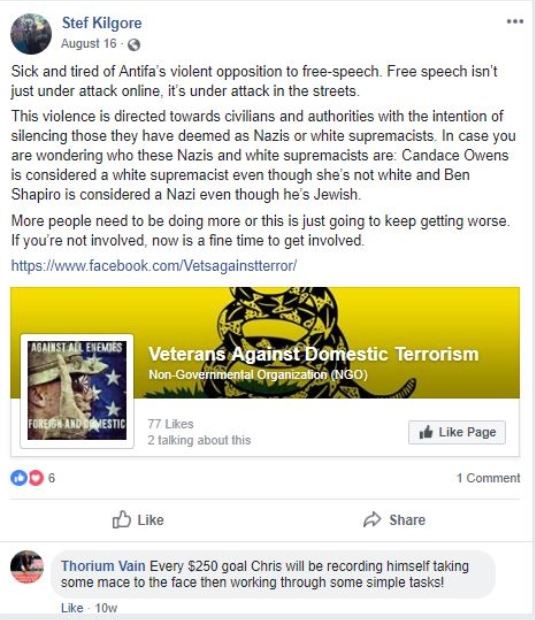 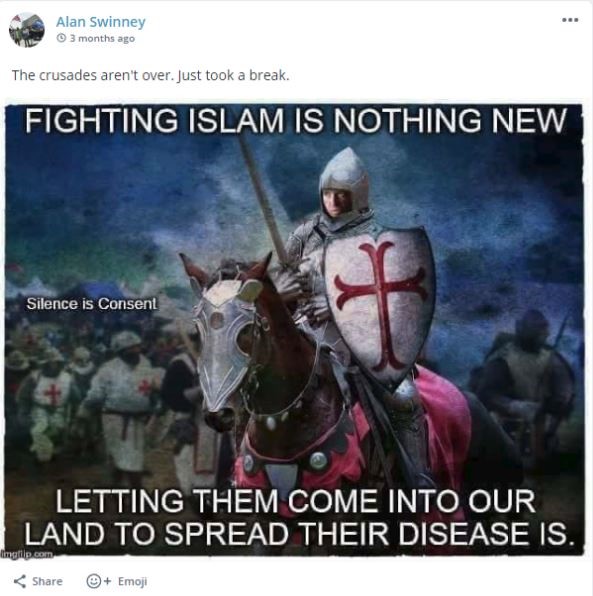 The pair attended Joey Gibson’s August 4th ‘Freedom Rally’ with violence in mind. Armed with flag poles and outfitted in a hodge-podge of protective gear, they joined forces with the racist bumble-bee Proud Boys to attack community members. Kilgore and Swinney were both part of a brawl with antifascists, in which Kilgore claims to have broken an antifascist’s fingers. He is seen on video (in orange) swinging his wooden flag pole. 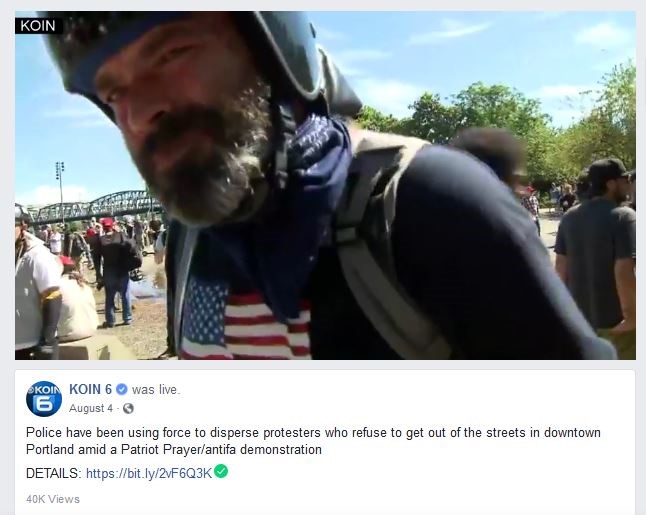 Alan James Swinney (birthdate: 5/18/70) is a white nationalist who, until last year, lived in Midland, Texas. In fall of 2017, Swinney purchased several acres of land near Romeo, Colorado. He has invited other ‘patriots’ to join him on this land, which he wants to turn into a self-sustainable community ‘free of liberals.’ He brags that he has more than four thousand rounds of ammunition stocked. Swinney is currently living off the money earned from his Bitcoin mining adventures and what he saved from his time working in the oil and gas industry. He relies heavily on donations, the majority of which are routed through his PayPal account. With this money, he travels across the country, bouncing between far-right rallies. He lives out of his white Toyota pickup, sleeping in campgrounds and in his truck between rallies. He has a Planet Fitness membership, which he calls his “office” and is where he works out in order to train to assault antifascists. The gym, which his membership allows him to access locations nation-wide) also serves as his opportunity to shower since he lives out of his truck. Please call the headquarters and demand that they revoke his membership: (603) 750-0001. 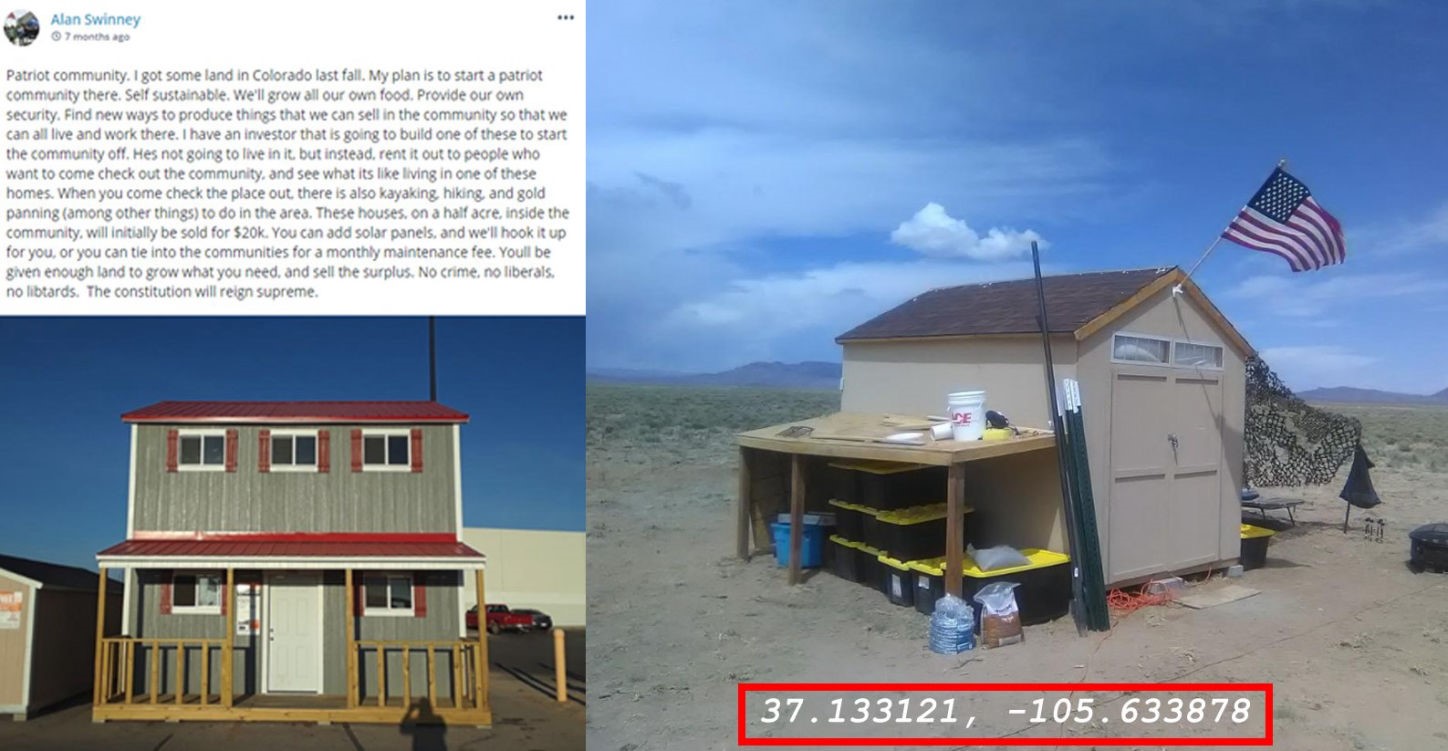 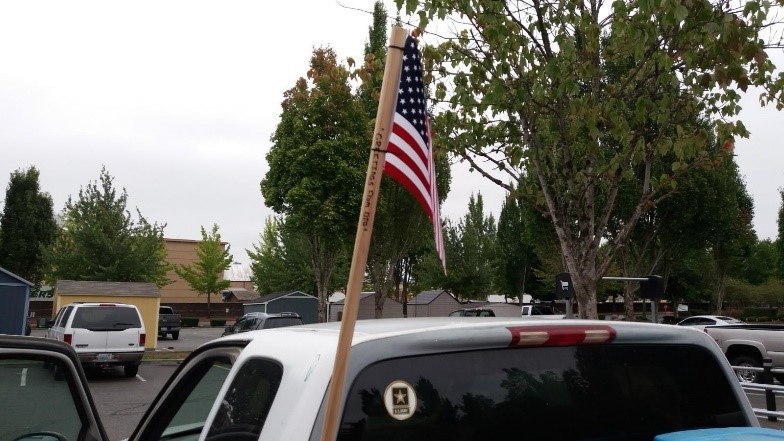 Swinney shares a photo of his truck, which he sleeps in while traveling from rally to rally.

Swinney is a Proud Boy, and frequently rallies alongside Pacific Northwest Proud Boys like Ethan Nordean. Alan also promotes xenophobic and white nationalist content on social media. On his MeWe account, he shares memes about ‘white genocide,’ a white supremacist conspiracy theory, and rails on diversity and multiculturalism. The content he shares is often Islamophobic, and he echoes the Proud Boy notion of a ‘Western Culture’ under siege by non-whites. 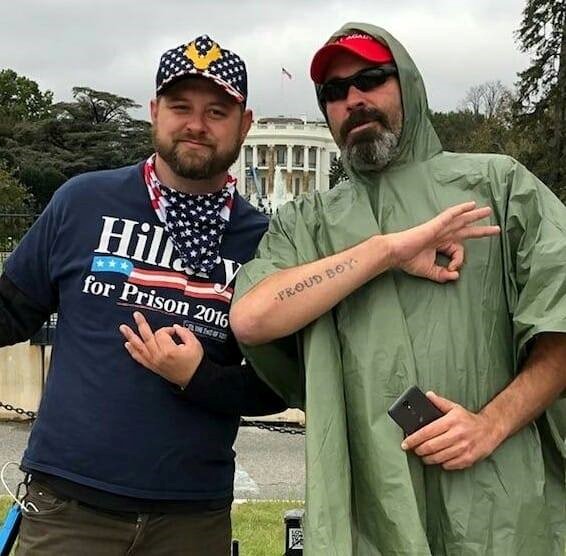 Alan Swinney on the right, showing off his “Proud Boy” tattoo. 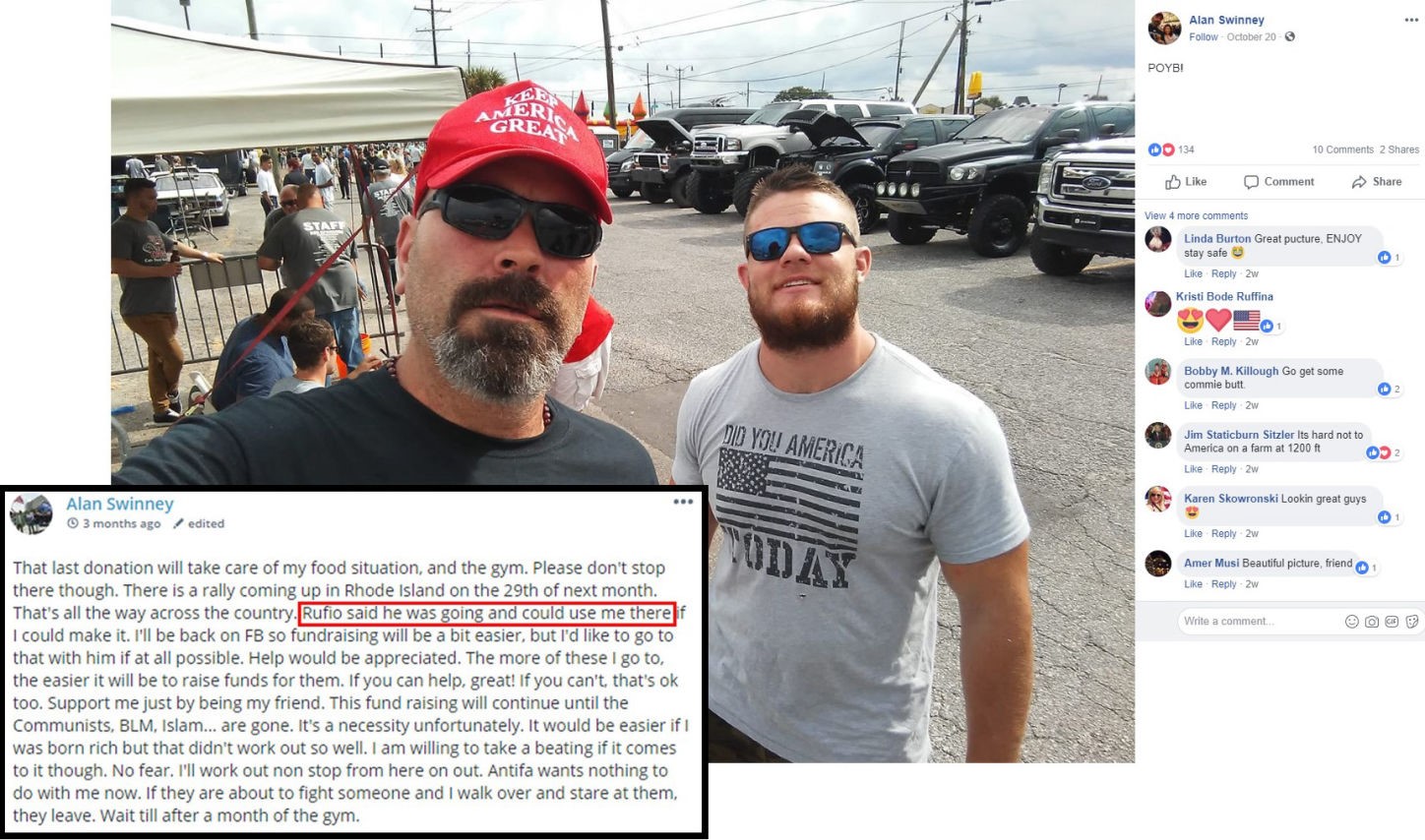 Swinney posing with Proud Boy Ethan Nordean, who he traveled with to Rhode Island.

Unsurprisingly, like most members of the Proud Boys, Alan Swinney has a history of misogynistic violence. On October 31, 2012, he was arrested and charged with a Felony for strangling a family member or spouse. The case was eventually dismissed. 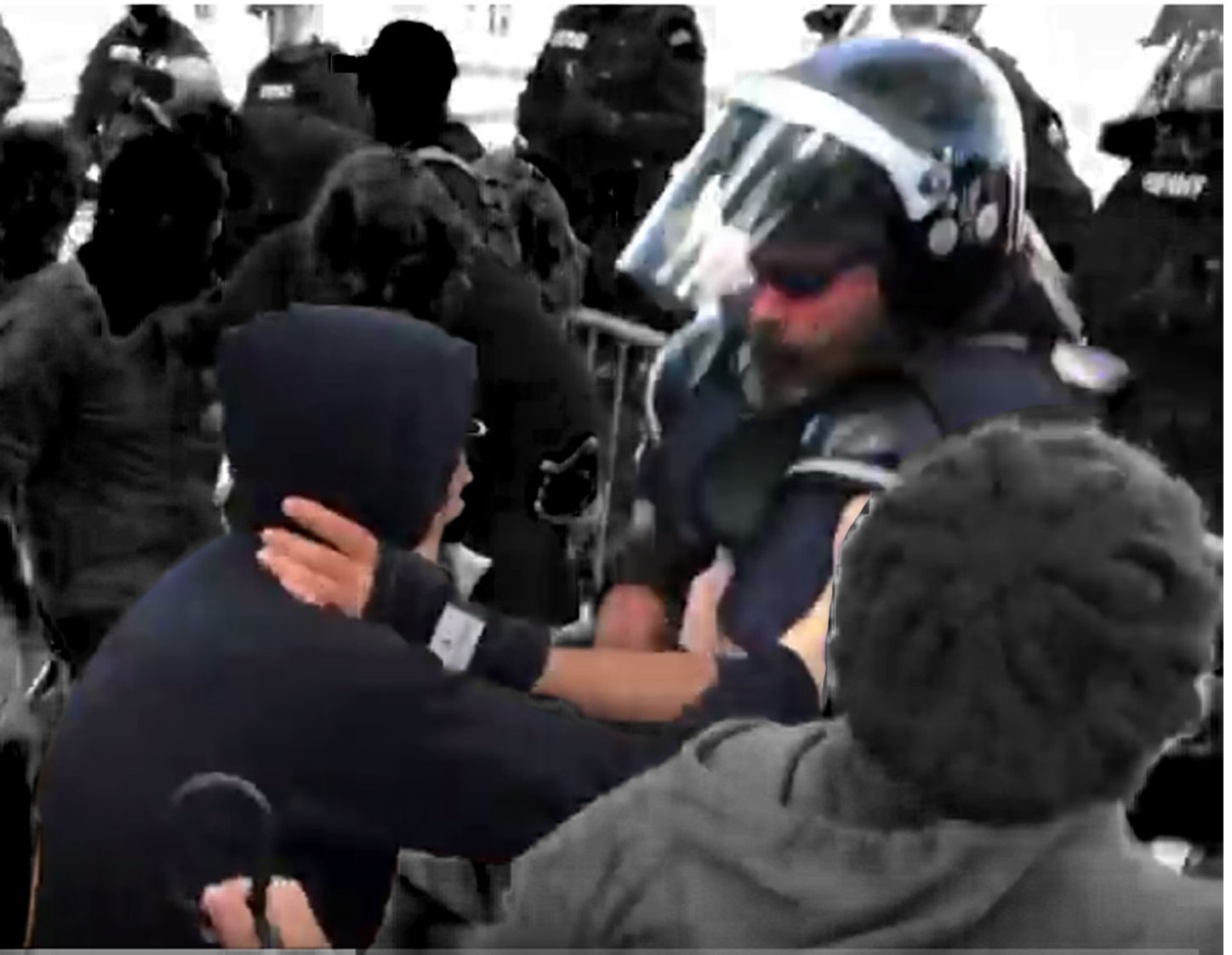 Alan Swinney uses his practice of strangling family members to choke an antifascist at a rally.

As antifascists, it is our duty to make it clear that racism and fascism is not welcomed in our town. If white supremacists think they can move into our town and go unnoticed, they have a lot to learn about the Pacific Northwest antifascist network. We will be monitoring you, and we will not let up pressure until you are chased out of our community. If Pay Pal funded fascists have taken up the hobby of traveling from state to state to attend fascist rallies, know that our network stretches nation-wide and you will be tracked. There is no where you can hide. 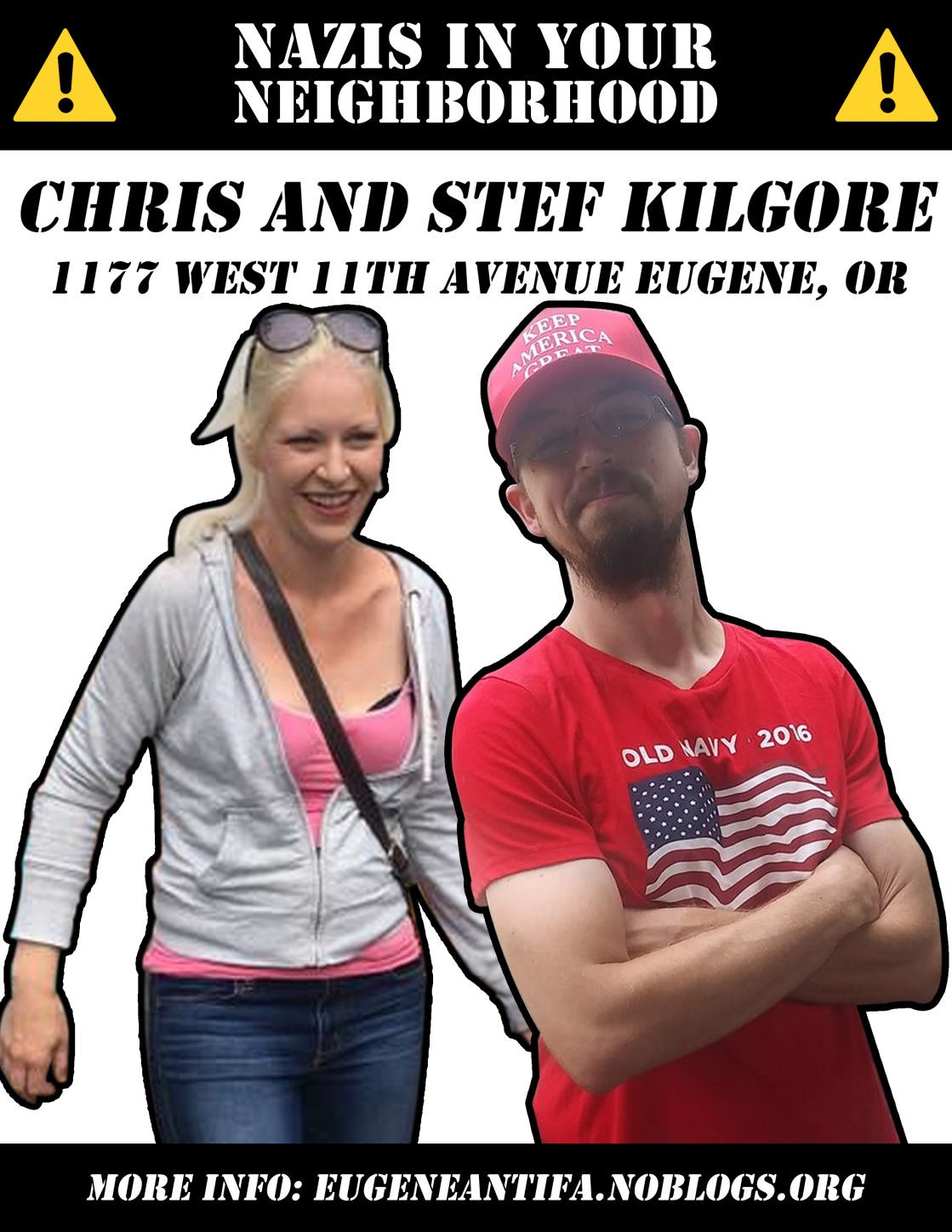 Chris Kilgore plans on attending Haley Adam’s misogynistic ‘HimToo’ rally in Portland on November 17th. We’ll be there to show him how antifascists #PushBackPDX. Join us!