Unicorn Riot published Identity Evropa’s private Discord server in March 2019. The server contained thousands of messages from dues-paying members of the group, many explicitly anti-Semitic and racist. Shortly thereafter, executive incel Patrick Casey abandoned the “Identity Evropa” brand and renamed his group to “American Identity Movement. This aesthetic maneuver was a transparent attempt to distance the group from its role in the 2017 “Unite the Right” rally in Charlottesville, Virginia and the optical flop when his “identitarian” group’s neo-Nazi views got exposed by Unicorn Riot. After the rally, a neo-Nazi drove his car into an anti-racist crowd, killing Heather Heyer and injuring dozens more. Since Unite the Right, members of Identity Evropa/American Identity Movement have been implicated in a July 2018 vandalism and attempted arson attack on a synagogue in Indiana.

Benjamin Scott Spooner is a neo-Nazi and lived in the Cottage Grove and Eugene, Oregon area soon after getting out of the Army in 2012. He worked for several different companies, including Emerald Pool and Patio and the Centene Corporation in Eugene. Centene is a massive healthcare company which provides services for government sponsored health programs. In Eugene, the company is responsible for the Oregon Health Plan through Trillium, a “coordinated care organization.” Benjamin was a data analyst for Centene/Trillium from 2015 to 2016, meaning he had access to sensitive health records for thousands of low-income and at-risk Oregonians.

Benjamin Spooner’s work history in the Eugene area. Trillium Community Health Plan is a daughter organization of the Centene Corporation Spooner was fired from his position at Trillium in 2016.

While working for Trillium, Benjamin went back to school through an online UC Berkeley program. He earned a master’s degree in information and data science in 2016 and left Eugene shortly after to return home to Ventura County, California. In 2017, Benjamin married Danielle Lynn Spooner (nee Malliris) who he had met in Eugene. This was Benjamin’s second marriage; he underwent a divorce with his previous partner in Lane County, mid-2013.

Danielle Lynn Spooner grew up in Springfield, Oregon graduating from Thurston High School in 2008 and eventually found work as a data analyst in Eugene. Together, in 2016, the Spooners fled Oregon and moved to Camarillo, California where they currently reside. In January 2019, Danielle gave birth and Benjamin posted photos of the newborn to the Identity Evropa Discord server with the caption “Chalk up another point for team white.” He will likely raise his children to share his white supremacist views, and he threatened to leave “[his] kids nothing unless they produce white grandkids.” 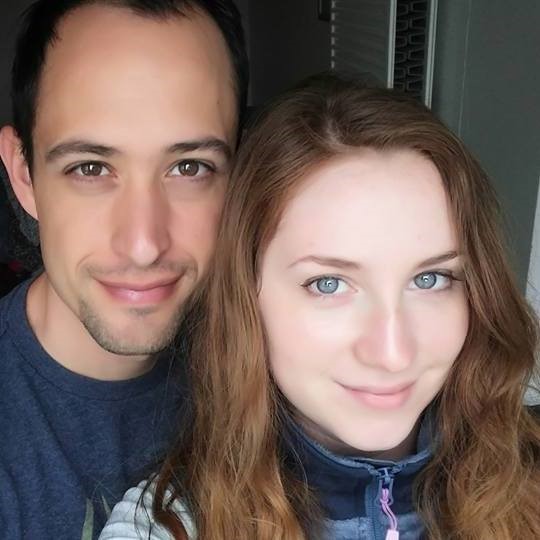 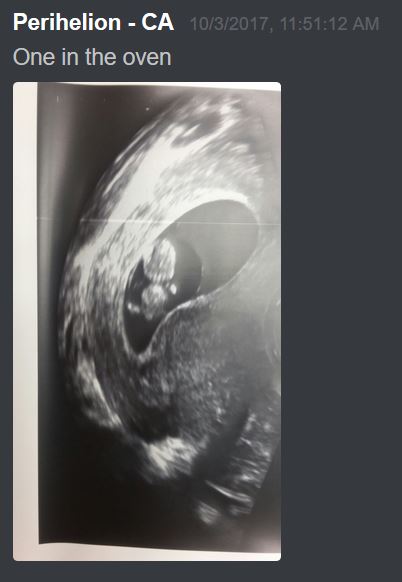 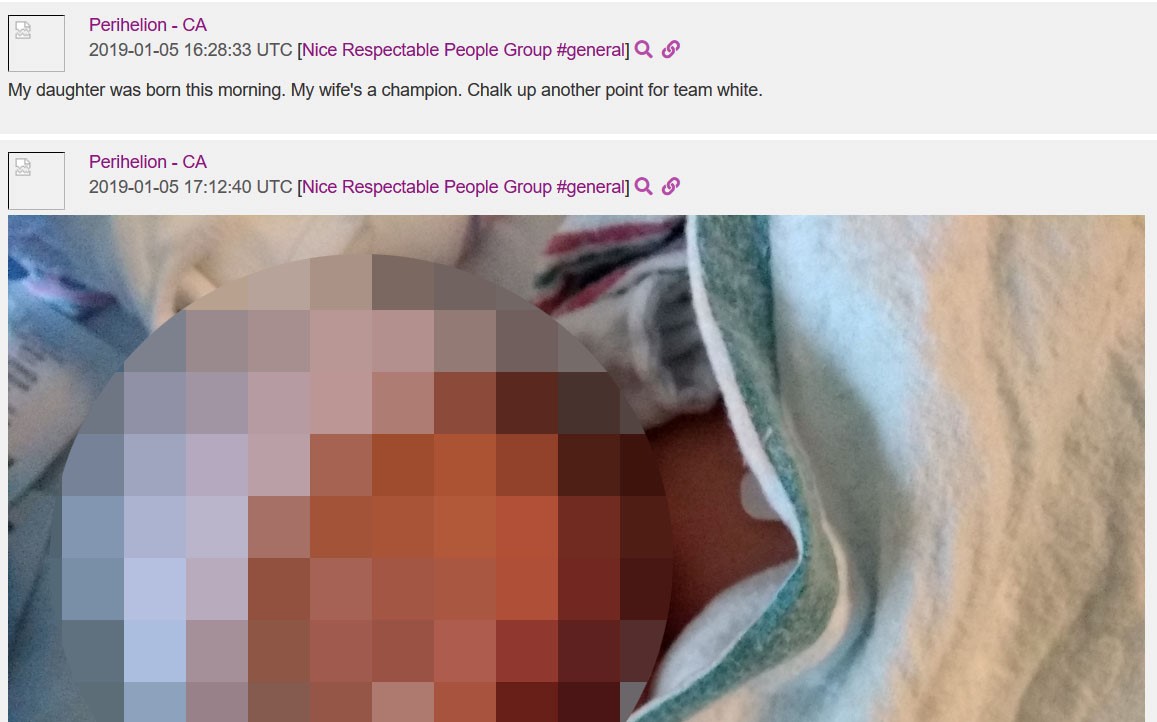 Benjamin Spooner shares his racist plans for his children.

Benjamin Scott Spooner was one of the most active members on the Identity Evropa Discord server. Over a two year span, Benjamin managed to contribute 3,245 messages as “Perihelion,” making him the 16th most active member of the server. A large number of his messages are explicitly anti-Semitic and racist. 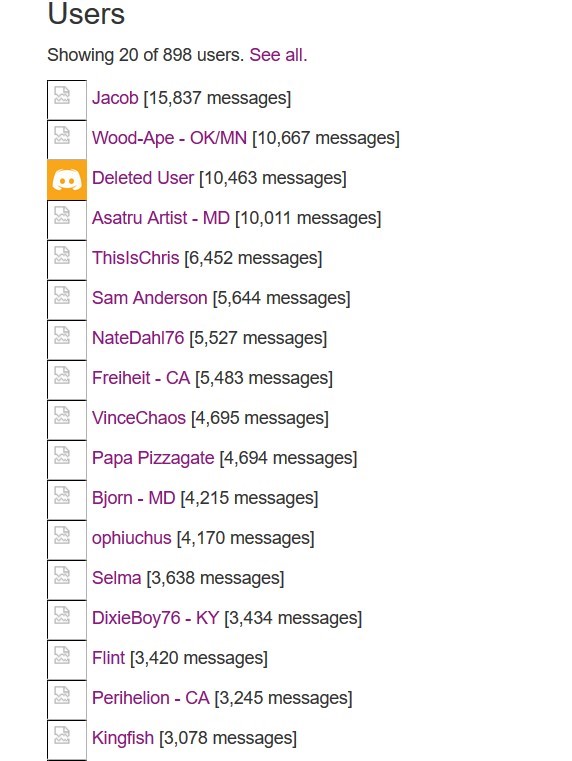 Benjamin Spooner posted more than 3000 messages as “Perihelion” on the Identity Evropa Discord server. Many of the frequent posting Nazis have been identified and you can read more about them on IdentifyEvropa.org

Another Identity Evropa/AmIM Nazi has to tell Benjamin Spooner to be less anti-Semitic on the server.

Benjamín Spooner AKA Perihelion fears that anti-fascists would map IP addresses to identify members of Identity Evropa. Sarah Dye AKA Volkmom responds to him. Volkmom was named in the court documents of Nolan and Kiyomi Brewer, two Identity Evropa members who painted swastikas on an Indiana synagogue.

Benjamin Spooner AKA Perihelion is against non-white immigration and advocates for an end to immigration to the so-called United States.

Benjamin Spooner AKA Perihelion employs the anti-Semitic “echoes” in a Discord message.

Benjamin Spooner AKA Perihelion is a big Pewdiepie fan. The ultra-popular YouTuber has amplified anti-Semitic YouTubers and used racist slurs in his videos, which are viewed by a young audience.

Benjamin Spooner AKA Perihelion wants Eugene, Oregon to be “bullycided.” He posts this in response to an Identity Evropa member bragging about placing “It’s Okay to be White” posters at the University of Oregon campus in Eugene.

Benjamin Spooner left the Eugene area by the time we successfully identified him as a neo-Nazi and member of Identity Evropa/American Identity Movement, but he continued to monitor news and events in Eugene. Some of these events were posted in the Identity Evropa Discord server, and later on the Mattermost platform. Spooner reacted bitterly at the mention of Eugene when short term Identity Evropa member “Tyler Baker” posted photos of his flyering done on the University of Oregon campus. Later, when we exposed Matthew Combs and Bethany Sherman as neo-Nazis running a Cannabis testing lab called O. G. Analytical in Eugene, Benjamin Spooner reacted in Combs’ and Sherman’s favor. 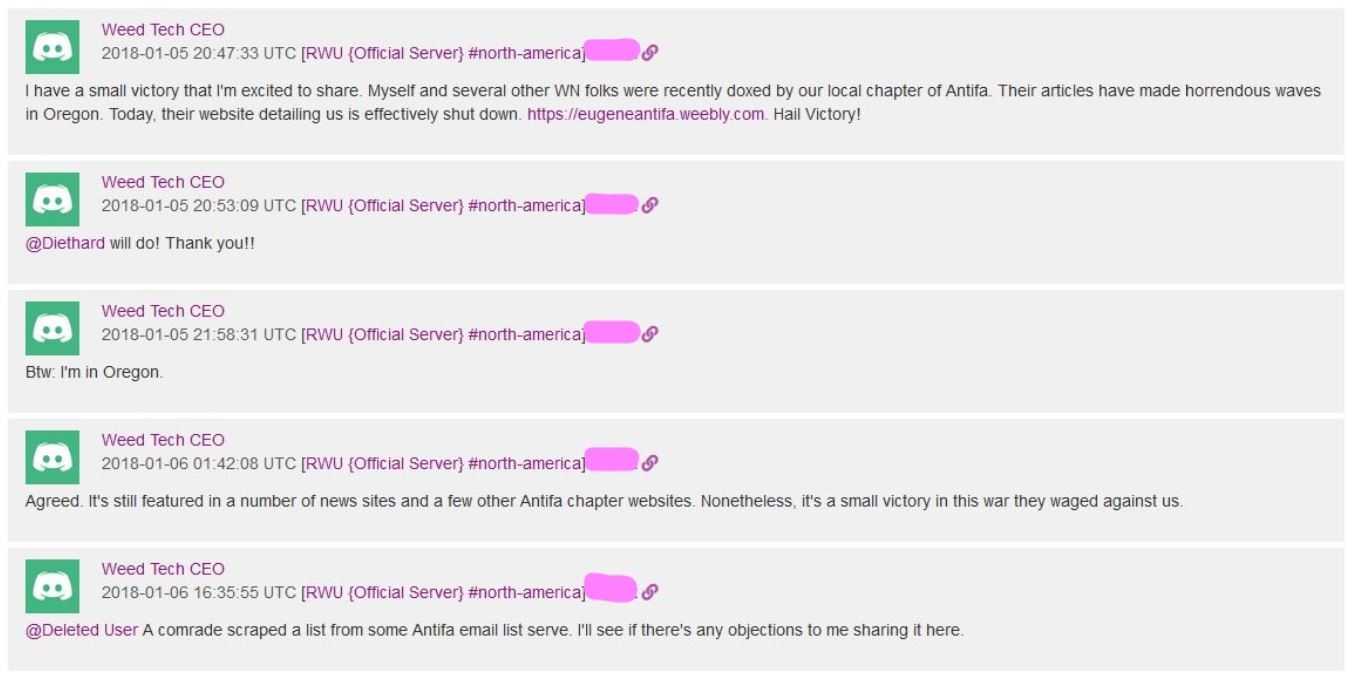 A Discord user in another server using the handle “Weed Tech CEO” appears to be Bethany Sherman. The user mentions shutting down our original blog in retaliation for exposing Combs and Sherman. In addition, the user offers to share a list of “Antifa” members.

Members in the Identity Evropa server discuss the article exposing Combs and Sherman. One member, “Deleted User,” encourages bosses to fire employees who do not also hold neo-Nazi ideology.

After graduating high school, Benjamin went to the East coast and earned a bachelor’s degree in Economics and Comparative Politics from West Point Academy. He then served in the Army for five years, and after his officer training in Kentucky, was deployed to Iraq in 2008, first as a platoon leader in Eastern Iraq and eventually as an intelligence officer with a high security clearance. He soon developed into a full-fledged neo-Nazi. During his period of radicalization, Benjamin Spooner was going back to school. He spent a year at Oregon State University studying computer science, and in 2015 he began working towards a master’s degree in information and data science through an online University of Berkeley program. The Spooner family poses with Benjamin Spooner. Ben is wearing a West Point uniform in this picture. 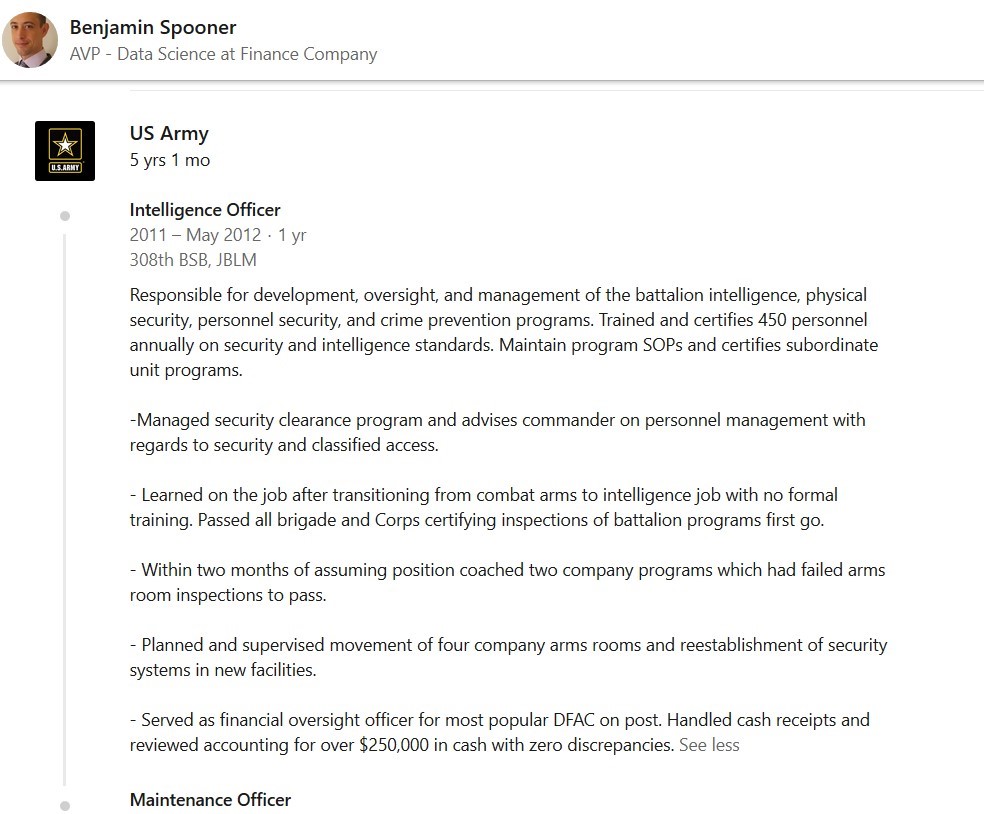 Ben Spooner managed a security clearance program when he served as an Army intelligence officer from 2011 to 2012.

Benjamin Spooner AKA Perihelion tells Identity Evropa members that he is a veteran. 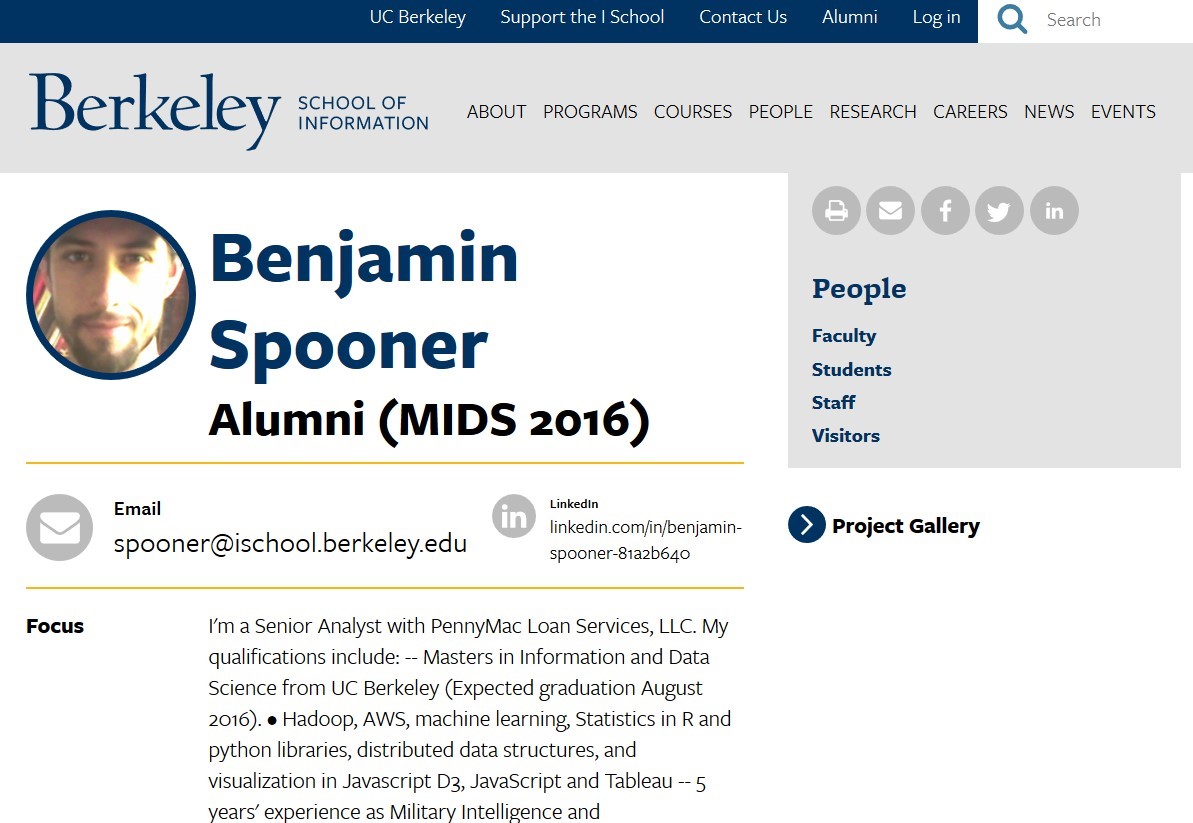 Benjamin Spooner, as “Perihelion – CA,”  tells us he has a degree from Berkeley

Benjamin Spooner AKA “Perihelion” was a part of the first Identity Evropa Discord server which was shut down following the Unite the Right rally in Charlottesville in late 2017. He was automatically verified to the second Discord server after its creation in September 2017. The new server came on the heels of the fallout from “Unite the Right” and was created with optics in mind. On October 1st, 2017, less than a month into the fresh server, Benjamin uploaded photos of Identity Evropa stickers and posters he had plastered around the California State University Channel Islands campus. The University took notice and released a statement decrying the hate recruitment material. Campus police opened a vandalism investigation into the stickers but did not have enough evidence to charge anyone. Benjamin Spooner celebrated the media coverage the incident received but, as far as we know, did not target any more college campuses. 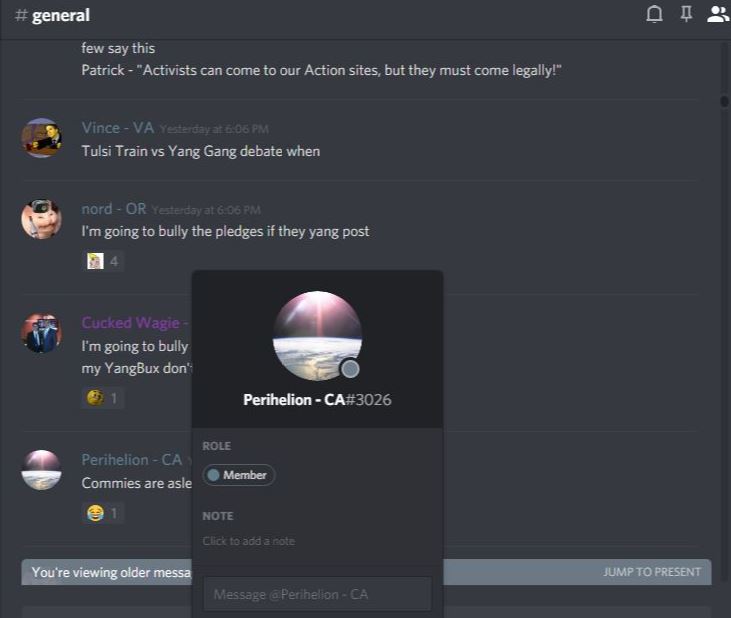 Benjamin Spooner has been an Identity Evropa / American Identity Movement dues paying member for over two years. He participated in multiple neo-Nazi communication platforms as “Perihelion” 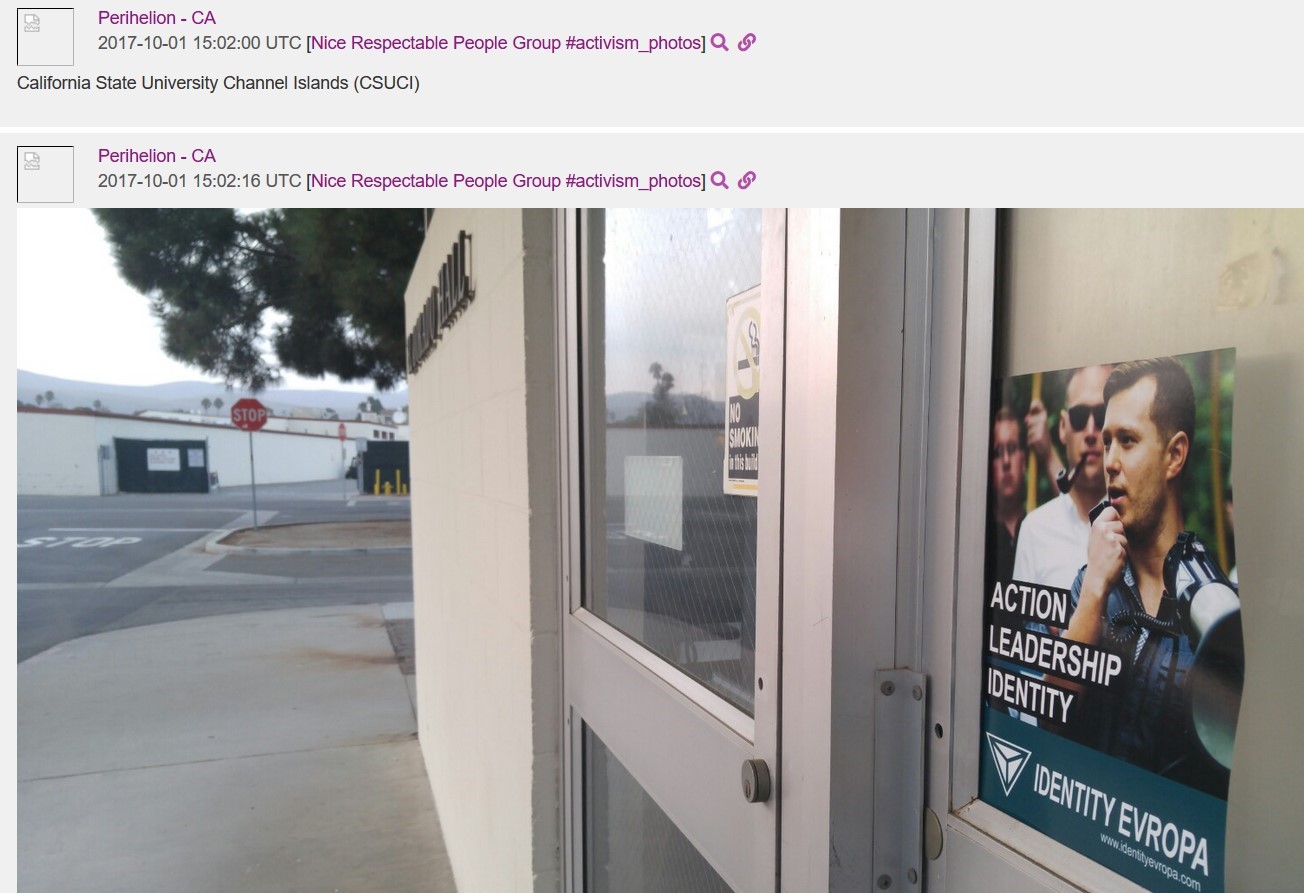 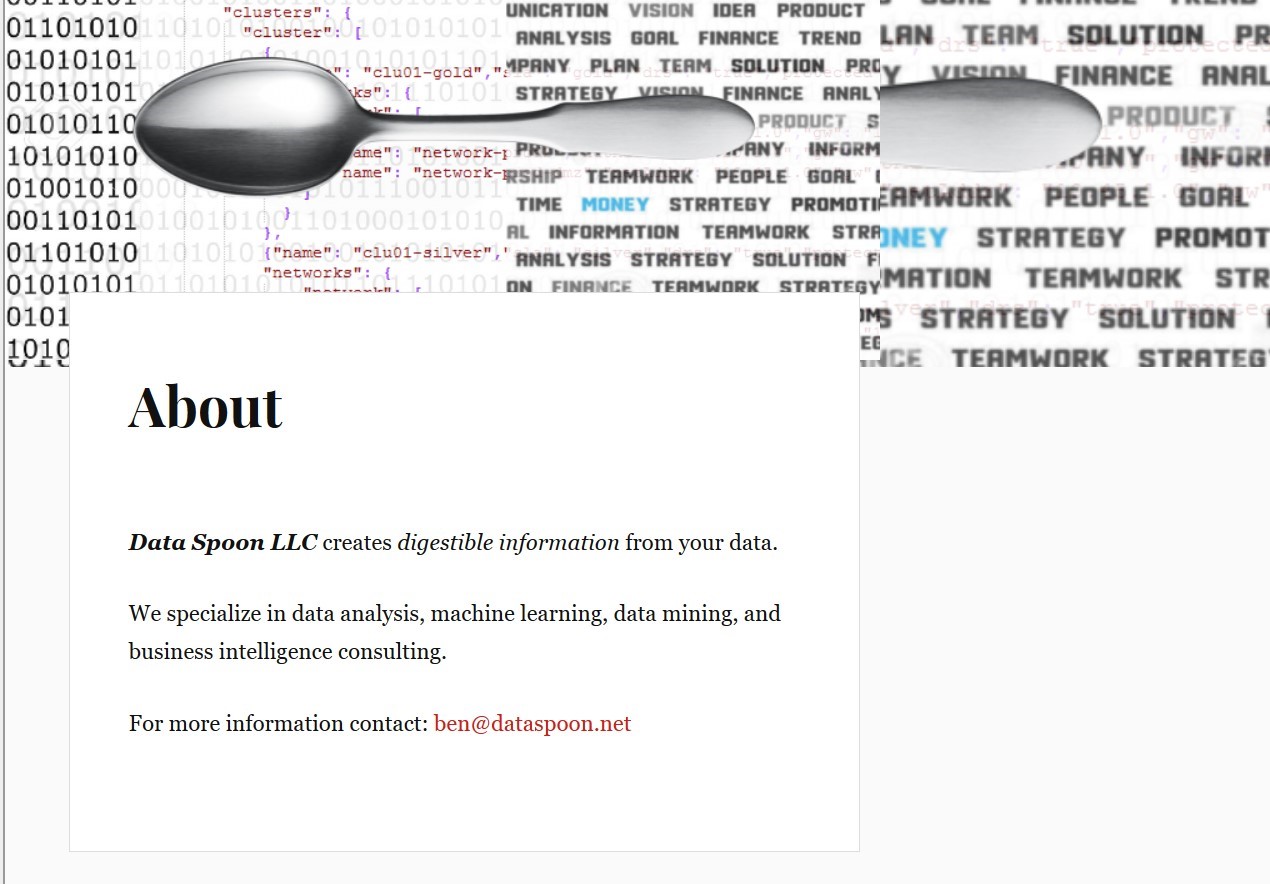 Benjamin Spooner is originally from Camarillo, California, a small inland town situated just north of Los Angeles. Ben was born in September 1985, the second-oldest of many siblings. He is the older brother to adopted orphans from Africa. His parents are Catholic Republicans, but Ben lambasts them on Discord for being unable to “begin to process race-realism.” He does not mask his political views and activity from his family, instead he tries to “redpill” them. “Red-pilling” is a term hijacked from the Matrix movies and is used by the alt-right to describe spreading neo-Nazi ideology. Ben boasts that he has “redpilled” one of his three brothers, likely Paul Daniel Spooner. 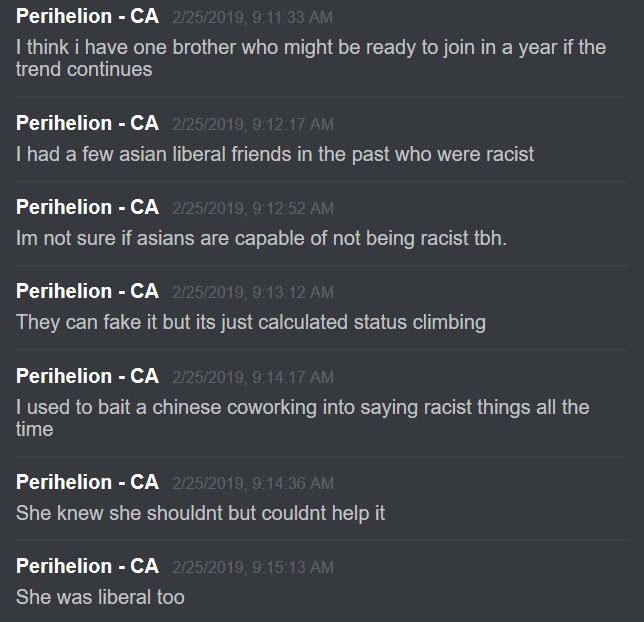 Benjamin Spooner AKA “Perihelion – CA” mentions red pilling and recruiting one of his brothers for Identity Evropa/American Identity Movement. Spooner disparages his Asian friends and co-workers. 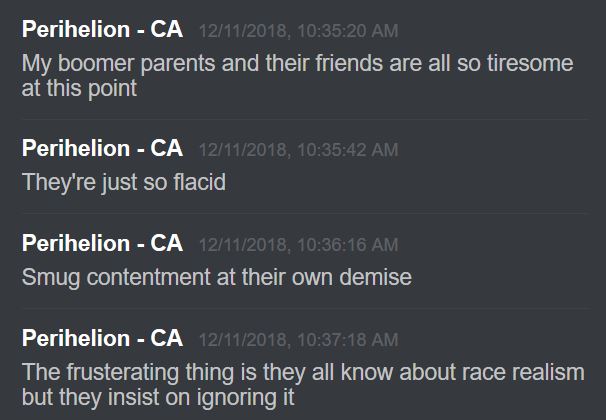 Benjamin Spooner AKA “Perihelion – CA” complains about not being able to fully red pill his parents. 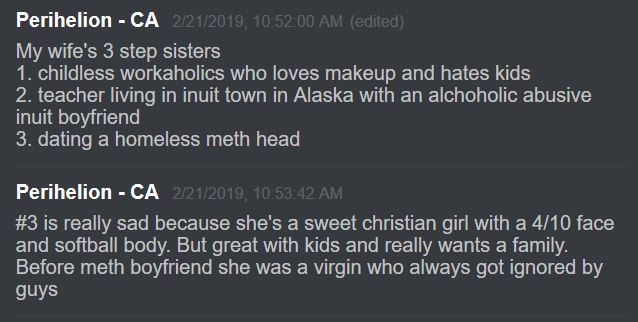 In addition to being a racist, Benjamin Spooner also exhibits misogynistic traits

A portion of the Spooner family lives in British Columbia, near Vancouver, in Canada. Benjamin mentions his Canadian cousins on Discord, calling them “super white” and “woke,” meaning they share his “race realist” views. Many of his family members work for “Spooner Electric Ltd,” a small electrical company which operates in the Chase, British Columbia area. Benjamin tells other Identity Evropa members that his “cousin hires elitricians (sic.) at $40/hr (canadian) and pays for their trade education.”

Benjamin Spooner AKA Perihelion has family in inland BC, which he mentions on Discord. He also claims that many of them are “woke,” meaning they may share his racist worldview. 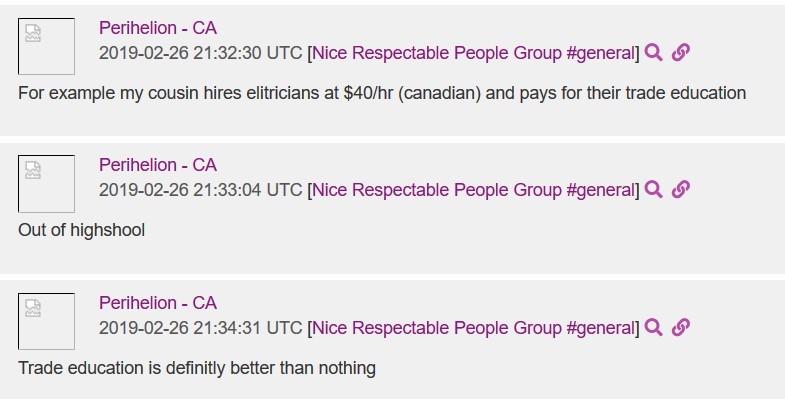 Benjamin Spooner AKA Perihelion explains that his cousin has an electrical business in Canada. Spooner Electric Ltd is located in Chase, British Columbia. Several of his family members work for the company.

In March 2018, Danielle and Benjamin purchased a 540,000 dollar house in Camarillo, California. Around that same time, Ben started working as a build engineer for Green Hills Software, a company based in Santa Barbara, California. He talks about his work on Discord as “Perihelion.” In one message, Spooner writes that he “submitted a 500k infrastructure build out plan for the company [he works] for.” In another, he goes into detail explaining how to get away with discriminatory hiring practices. He says that instead of using IQ tests, use college credentialism and coding tests. The very specific strategy that Ben outlines suggests that he may have instituted or is still instituting discriminatory hiring practices at his workplace. 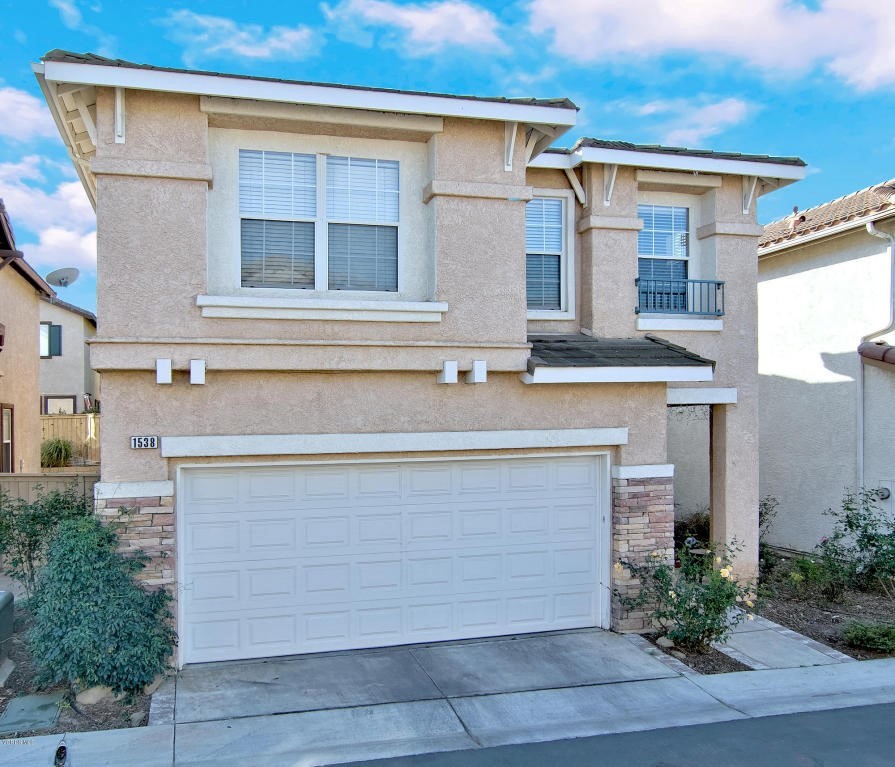 Ben and Danielle reside in this half-million dollar condo in Camarillo, California. 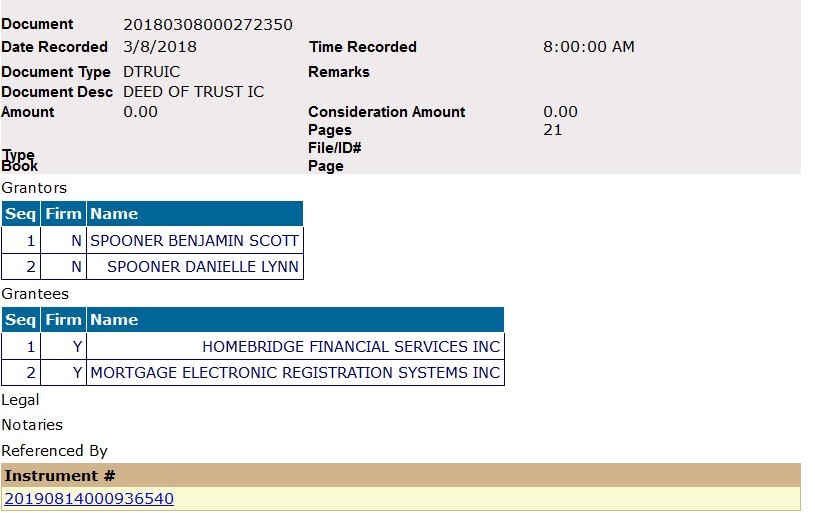 Ben and Danielle are both listed on the “deed of trust” for their Camarillo property. 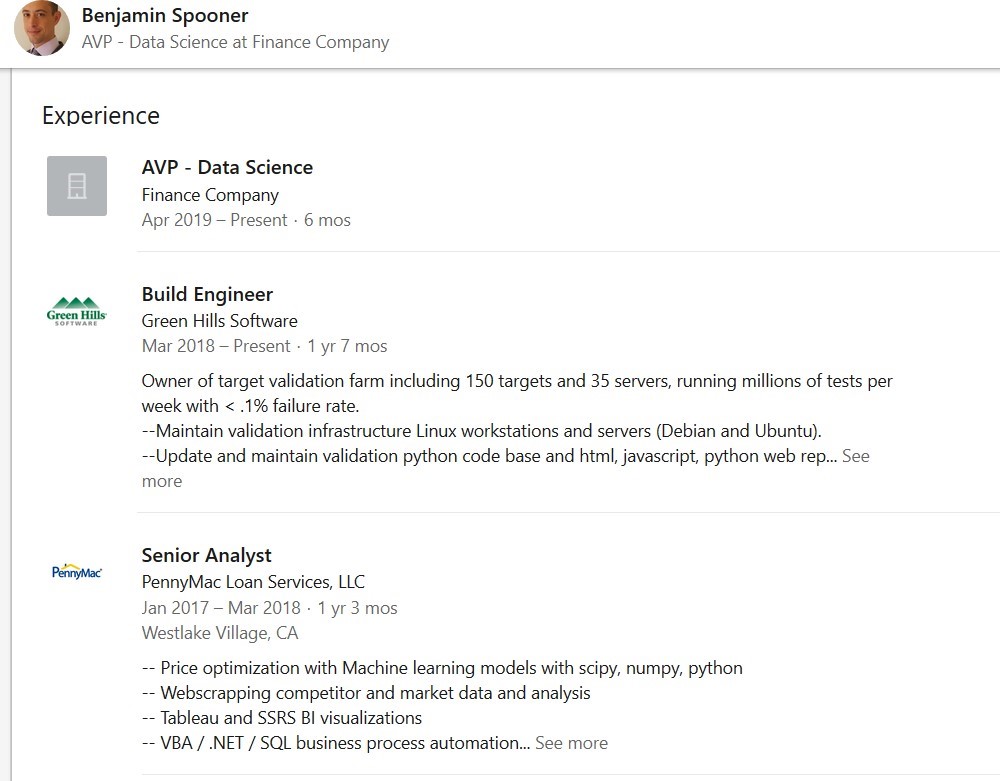 Ben’s three most recent jobs according to his LinkedIn account.

Ben submitted a 500k infrastructure plan for the company he works for. His LinkedIn account says that he is assistant vice president of data science at a “finance” company. 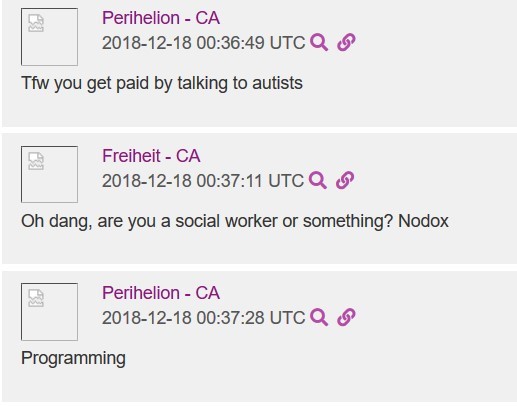 Benjamin Spooner uses ableist language to describe the people he works with at his programming job.

Benjamin Spooner AKA Perihelion gives Identity Evropa members very specific techniques to get away with hiring discrimination, particularly in programming fields. Ben has held powerful positions at many companies and organizations.

Benjamin Spooner is a dangerous neo-Nazi and a member of Identity Evropa/American Identity Movement. His military experience, skill set, wealth, and employment status enhance his ability to influence, recruit, fund, and organize white supremacist endeavors. Like so many other members of this white supremacist group, Benjamin can initially appear as a regular guy at first glace, with white supremacist rhetoric easing into conversation in a gaslighting, redpilling manner. For those who know him, and for those who read his messages from the Identity Evropa leaks, there is no mistaking that Benjamin Spooner is a racist and may be abusing his employment positions to sabotage non-Whites.

Please reach out to us with any additional information regarding Benjamin Spooner. 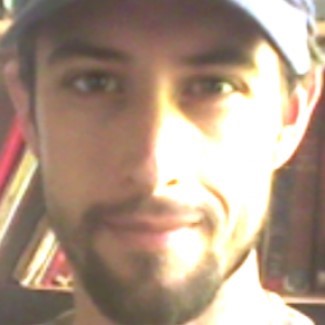 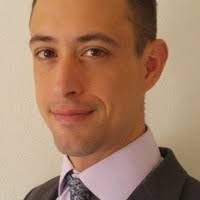 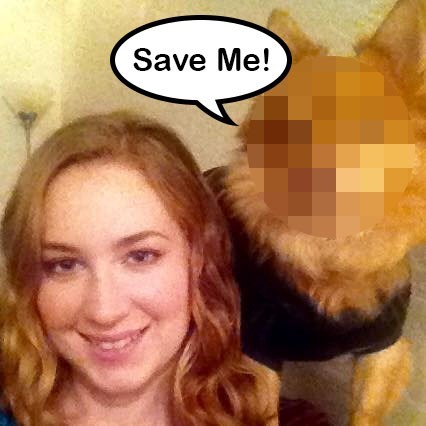 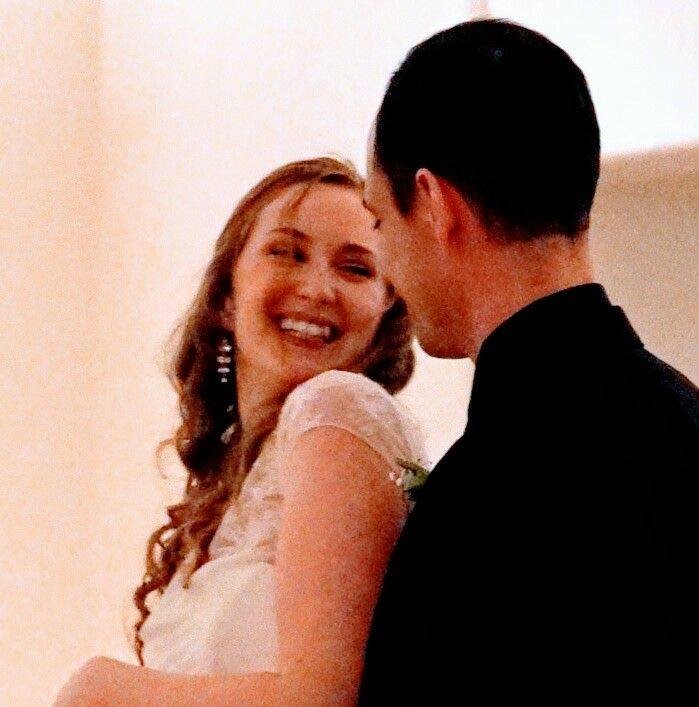