Andrew Allwander of Eugene, Oregon attends a Patriot Prayer rally in Portland on 6/30/18

Andrew William Allwander was born on June 3, 1982 in Eugene, Oregon. He began to train in martial arts as a young teen and traveled around the United States, and internationally, learning different techniques and arts. Allwander spent some time in California where he graduated from Biola University, a private Christian university with a degree in Intercultural Studies and minor is TESOL and Bible.  He left the university disgruntled because the university culture was not conservative enough and, in his own words:  ” . . . the Word of God has been so corrupted with Satanic deception. Not only their New Age, Occult spirituality, but the rampant sexual immorality and drunkenness.”  After he left Biola, Allwander spent some time in Kentucky and Alabama and lived for at least one year in Korea where he taught English Language Learners and earned his 4th degree black belt.

Recently, Andrew Allwander moved back to Eugene, and currently lives with his parents and grandmother off River Road at 250 Hawthorne Avenue, Eugene, Oregon 97404. Since his return to Eugene, he has attempted to earn money by teaching martial arts and has resorted to making house calls and teaching individual students in his front yard, out of garages, or at a public park.

Andrew Allwander grew up with a conservative mindset, which he honed at Biola university, and developed an interest in Nazi memorabilia. Even though his grandfather fought in WWII against the Nazis, Allwander seems not to have learned the lessons that the history of WWII should have taught. 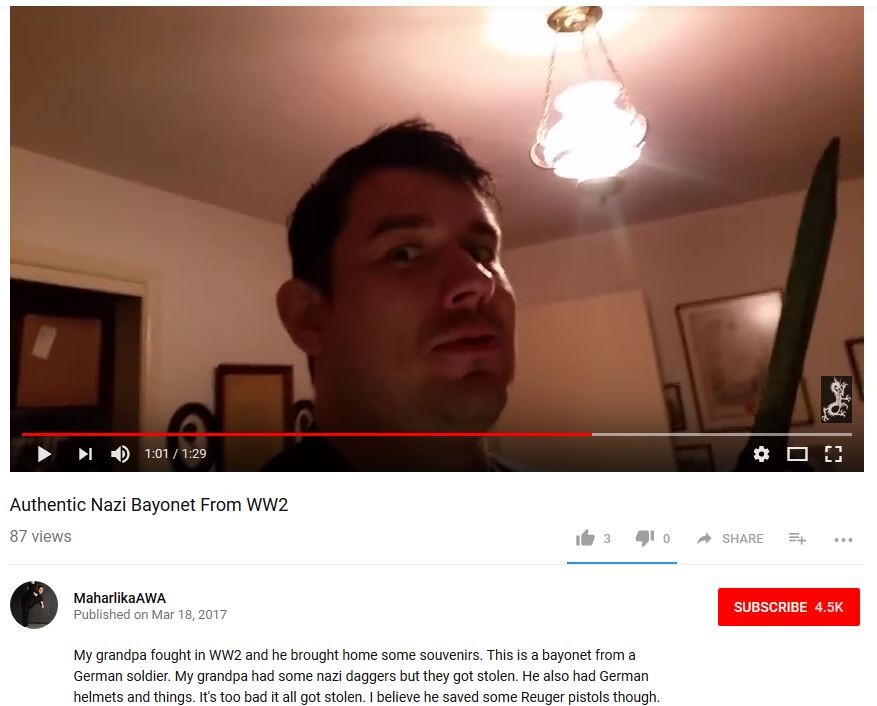 After the election of Donald Trump, many far right conservatives began to feel more comfortable expressing their extreme nationalistic and bigoted views. Andrew Allwander is one such example. Pro Trump rallies soon became more frequent and these rallies almost always drew a counter protest from antifascists. At these pro Trump rallies, antifascists and far right advocates often met each other with physical confrontation. Andrew Allwander found a hero in this: Kyle Chapman aka “Based Stickman,” a California resident who found fame in assaulting an antifascist activist by bludgeoning them on the head with a lead pipe in Berkeley. Chapman instantly became an Alt Right figure and has since constantly been in trouble with the law due to his overt violent activities against antifascist activists and anti Trump advocates. 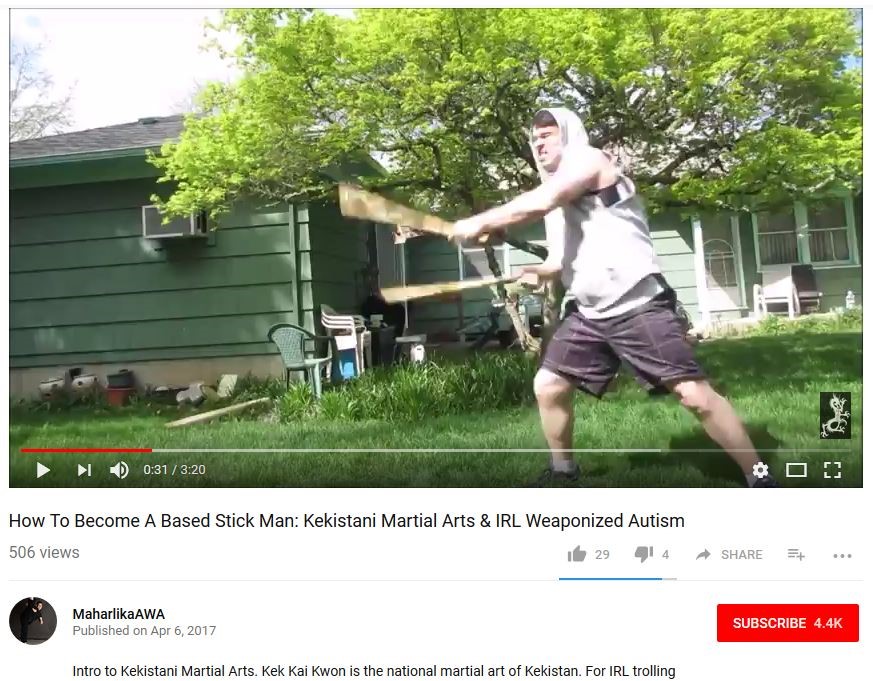 Andrew Allwander aims to train the Alt Right to become like Kyle Chapman aka “Based Chapman.” Note: “Kekistani” is a modern allusion to Nazi Germany; Often the far right will mock people on the Autism Spectrum.

Andrew Allwander served as the body guard for an Alt Right videographer, Keith Campbell, at the Patriot Prayer rally in Portland, Oregon on June 30, 2018. Soon after this bloody rally, Allwander joined a closed Facebook group titled “Patriot Prayer” in order to network with other Alt Right individuals with the aim of organizing and coordinating assaulting antifascist activists at the upcoming demonstration in Portland on August 4th. 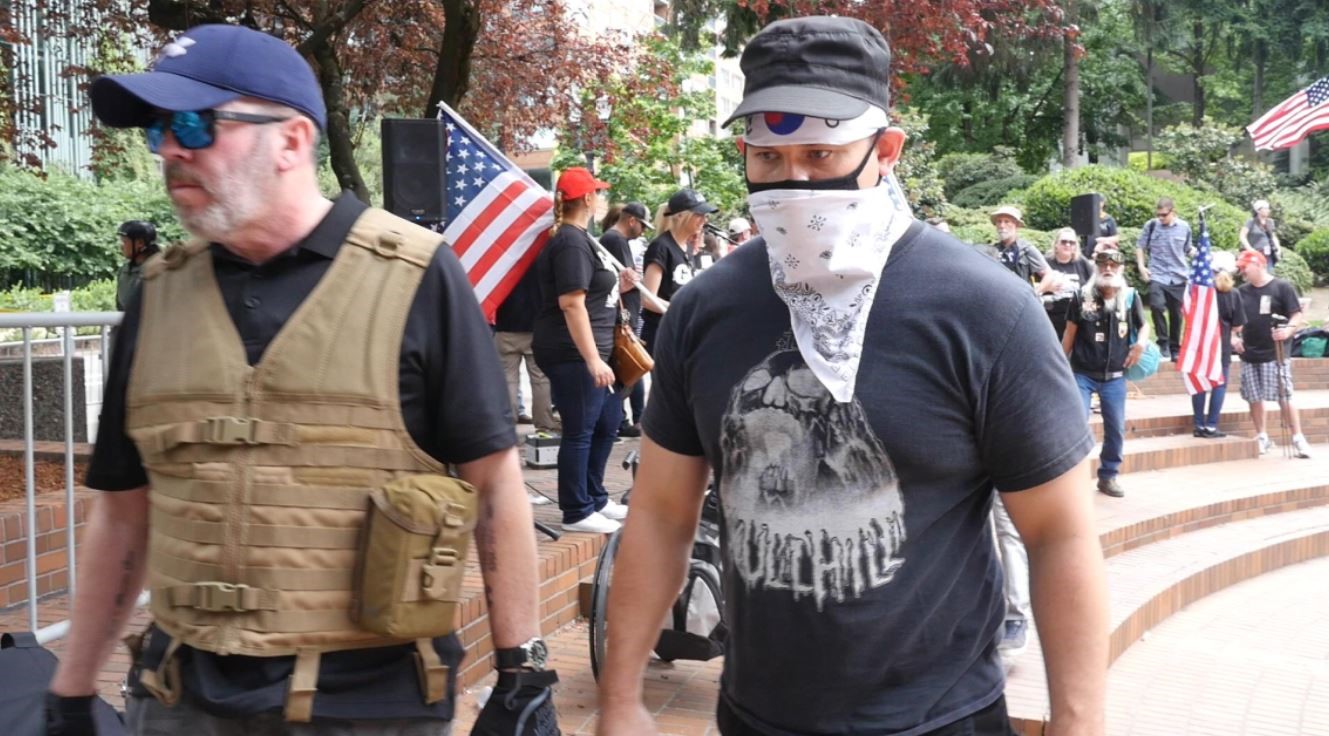 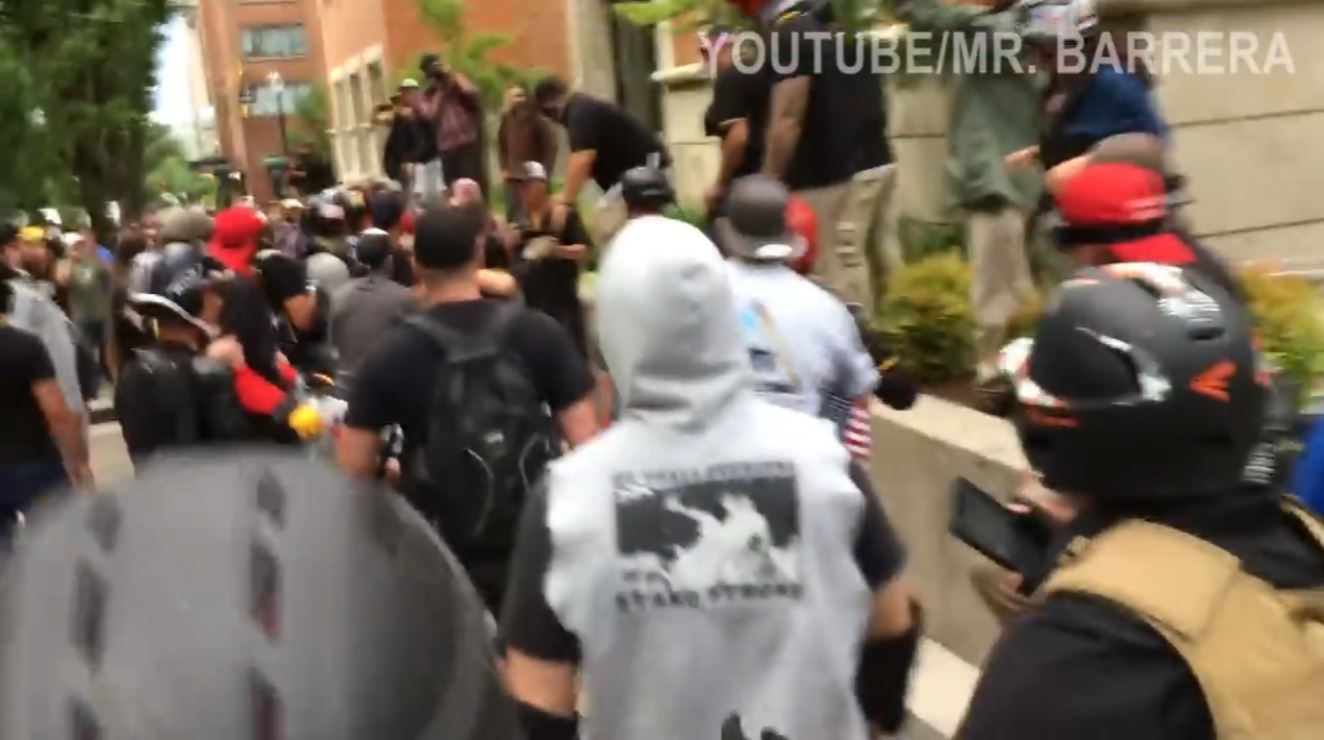 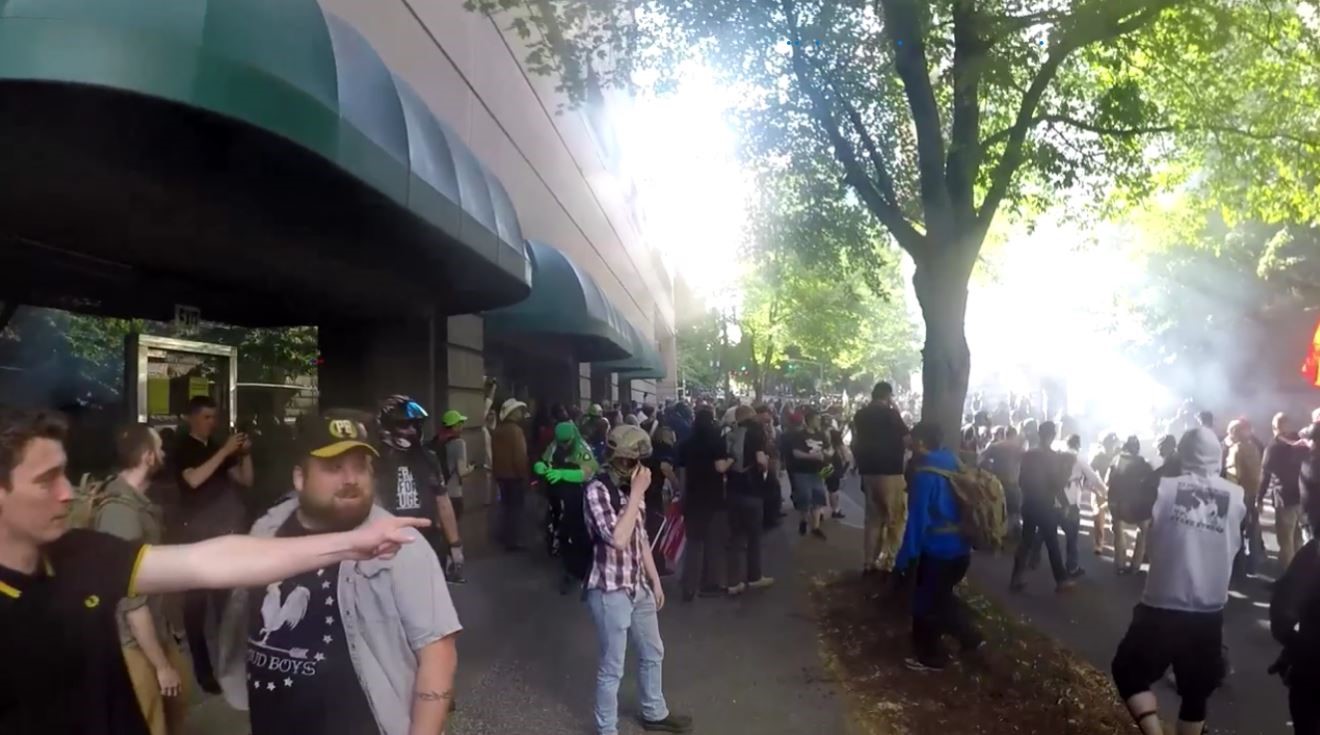 Allwander hoped to retain some anonymity on Facebook by using the fake name “Jim Baker,” but ironically, he used a real photo of himself. Perhaps he was naive in estimating antifascists’ research skills, but we quickly uncovered his true identity. Through a series of discussion threads in this closed Facebook group, we were able to track the horrendous plans Andrew Allwander and his accomplices plan to execute for the upcoming Alt Right Patriot Prayer demonstration in Portland on August 4th. Not only does Allwander plan to train the Alt Right in fighting skills, but he has also discussed assaulting antifascist activists, hog tying them, and even targeting women and the disabled. 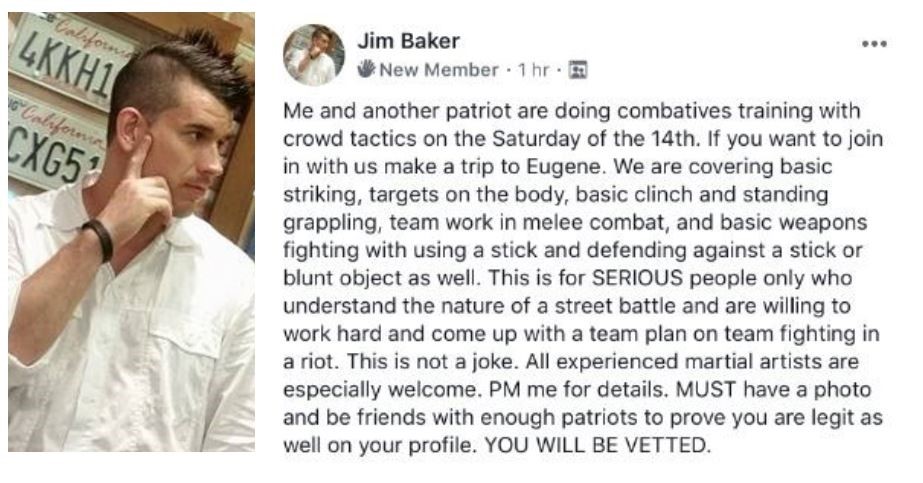 Andrew Allwander plans to host a “combative training” in Eugene on Saturday, July 14th in order to train the Alt Right in tactics for use in assaulting protesters on August 4th in Portland. 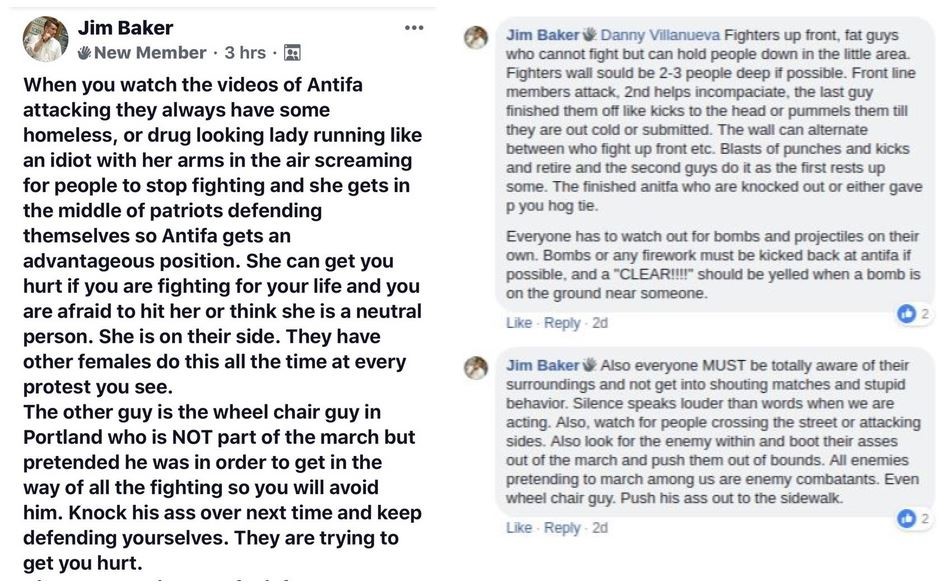 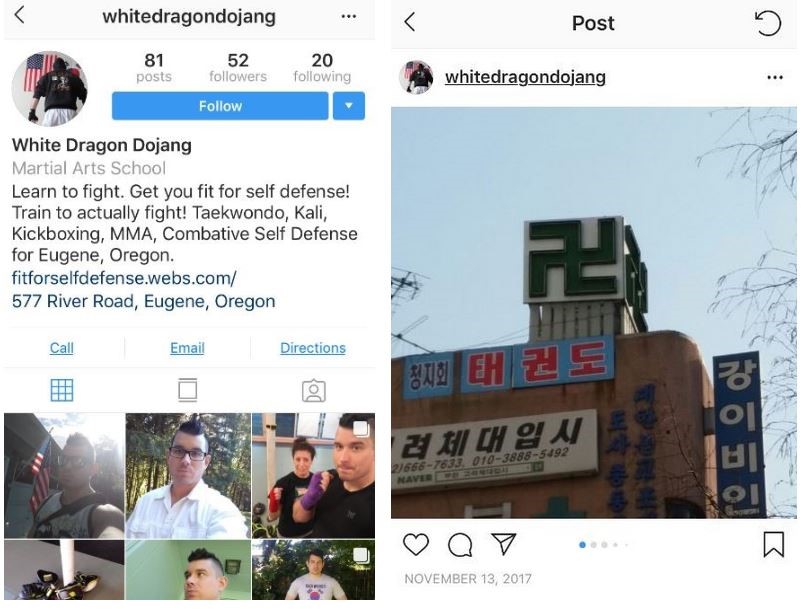 Increasingly, Andrew Allwander’s martial arts social media has begun to incorporate Alt Right content. Recently, he made posts glorifying the assaults by the Alt Right on antifascist activists in Portland alongside posts which show his affinity for Gavin McInnes, the founder of the white supremacist, hate group, “The Proud Boys.”

Be aware while at River Road and Whiteaker area parks (especially on Saturdays) for Andrew Allwander as he often “trains” at these locations.