Maxwell Lucas Myers (Age 20, born 4-18-1999) joined the Cascadian Coffee Company Discord server in April 2017 using the username “Siegurd”. At the time of joining the server, Max was still a student at Union High School in Vancouver, Washington. He tells other members of the chat the he is from the book club, which refers to the Daily Stormer Book Club. The Daily Stormer is a violent neo-Nazi site that has served as a central hub for white supremacists for many years. In 2016, the website’s founder Andrew Anglin published an article calling for the creation of “real-life troll army” Stormer Book Clubs in cities across the country. Participants in these “book clubs” are encouraged to partake in activism including posting racist fliers advertising the website. In addition to activism, Stormers are encouraged to actually hold book club sessions and discuss white supremacist texts.

Maxwell Myers AKA Siegurd joins the “Cascadian Coffee Company” (CCC) Discord server and tells members that he is from the Daily Stormer Book Club. 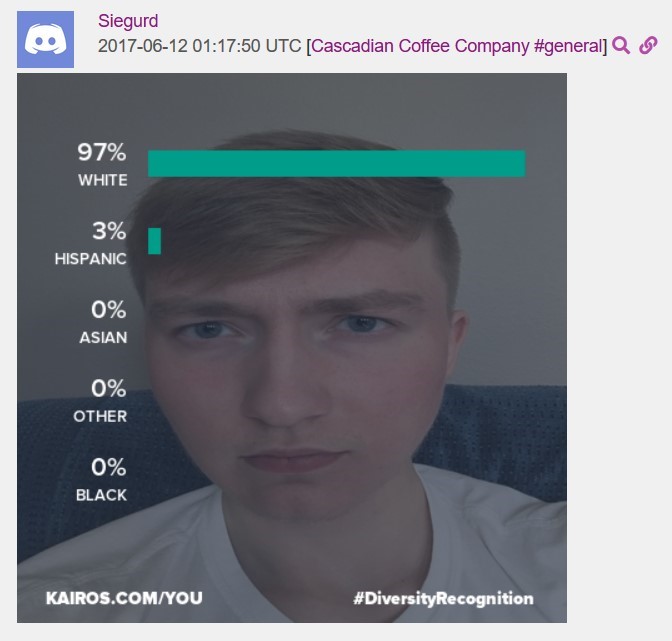 Maxwell Myers shares his mug with his Nazi pals on the CCC Discord server. 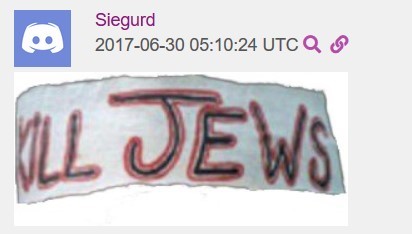 Many of Maxwell’s Discord messages on the CCC server are rank with anti-Semetism and explicit racism. You can view his messages here (CW/TW),

One particularly active contingent of the Stormer Book Club network emerged in the Portland, Oregon area called the “PDX Stormers”. Local antifascist groups like Rose City Antifa have outed a number of PDX Stormers and many have been staples at Patriot Prayer rallies. Maxwell Myers was part of this group and participated in several actions with them. On March 12th 2017, Maxwell took part in a book club meeting at the downtown Portland brewery Lucky Lab. Numerous other CCC members were present at the meeting, including former Corvallis, Oregon resident David Woods, Vancouver, Washington roommates Matthew Blais, Bogdan Gerasimyuk, Springfield, Oregon neo-Nazi Jimmy Marr,  and former Eugene, Oregon resident, #weednazi boyfriend Matt Combs. Staff members forced the group to leave the restaurant after a worker overheard their racist conversation. The group became confrontational, particularly David “Fashy Chad” Woods, who recently fled Corvallis, Oregon after assaulting antifascists with Jimmy Marr. Maxwell Myers can be seen in the low quality video of the confrontation obtained by Willamette Week. 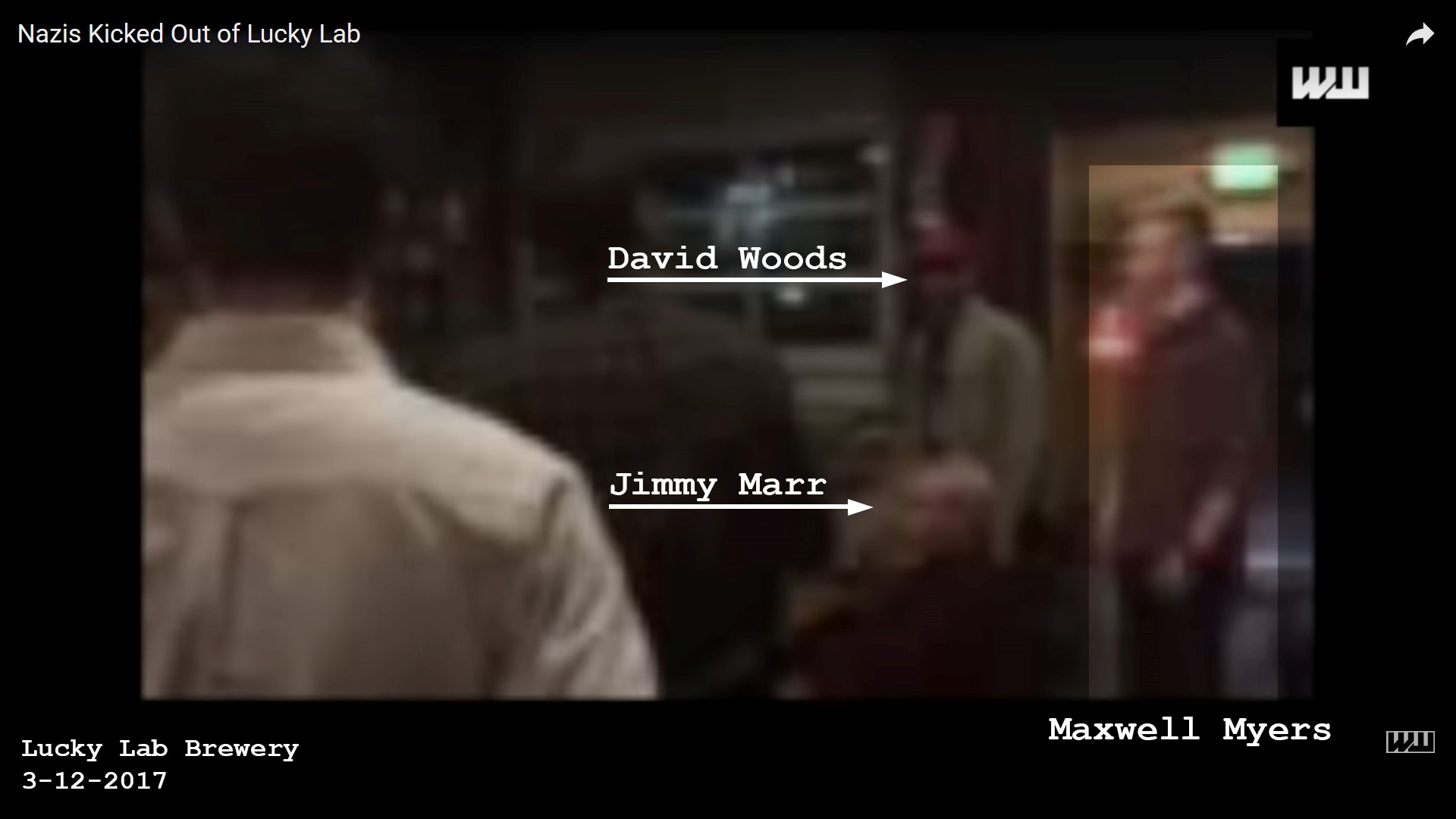 We have enhanced this screencapture from the low quality footage of the 3-12-2017 Lucky Lab incident in Portland Oregon involving numerous fascists from the CCC server. Maxwell Myers was part of the fascist contingent that was 86’d from the brewery, and he can be seen standing to the right of Jimmy Marr (seated).

In the CCC Discord server, Maxwell expressed interest in going to notorious Nazi Jimmy Marr’s Springfield, Oregon house on April 22nd 2017 for a “casual Hitler’s bday get together” with other members of the CCC Discord server. James “Jimmy” Marr discussed stowing weapons in his yard in the lead up to the Hitler meet-up. His Springfield house sits next to a busy park and an elementary school. Maxwell Myers showed interest in participating in the front lawn hate rally, but had scheduling conflicts with high school prom. 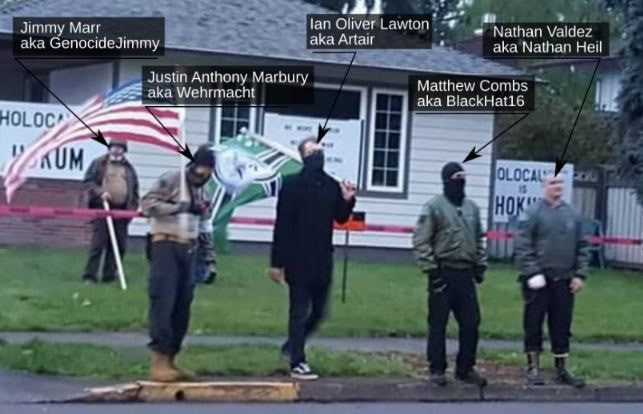 A handful of Nazis gather on Jimmy Marr’s front lawn in Springfield, OR to celebrate the birth of Hitler on 4-22-2017. The rally included numerous fascists affiliated with American Front, like Matthew Combs and Nathan Valdez. Maxwell Myers expressed interest in the rally but had high school prom on the same day.

Maxwell Myers AKA Siegurd replies to Matthew Combs AKA Blackhat16 when invited to Jimmy Marr’s Hitler party. He says that he is not able to attend due to high school prom. 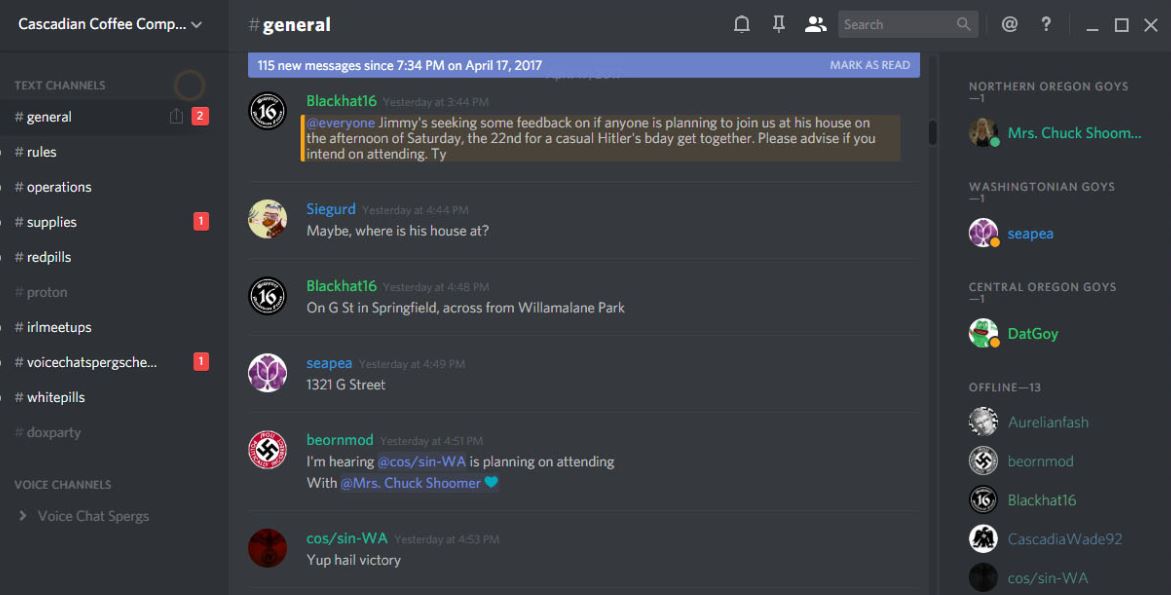 After graduating from Union High School in 2017, Maxwell Myers started school at the University of Washington in Seattle, Washington. He cracks jokes with other CCC participants, including Kaleb James Cole, leader of the Atomwaffen cell in Washington, about an engineering building on campus named “Sieg Hall.”  Kaleb recently made headlines when he was arrested in Texas along with Aiden Bruce-Umbaugh with several thousand rounds of ammunition and tactical gear. In October 2019, Kaleb Cole had his firearms seized though an Extreme Risk Protection order filed in Washington. In the CCC chats, Kaleb regularly interacted with Maxwell Myers and even talked about recruiting him for Atomwaffen. The Atomwaffen Division is an ultra-violent neo-Nazi group that stresses accelerationism and has been connected to multiple murders and terrorist plots. In 2015, the group began gaining significant membership from recruitment on the since-leaked Iron March forums.  The Atomwaffen Division has become based around Siege, a book of compiled essays written by James Nolan Mason. The group reproduces, publishes and sells the book to other neo-Nazis and uses the profits to fund their organization. 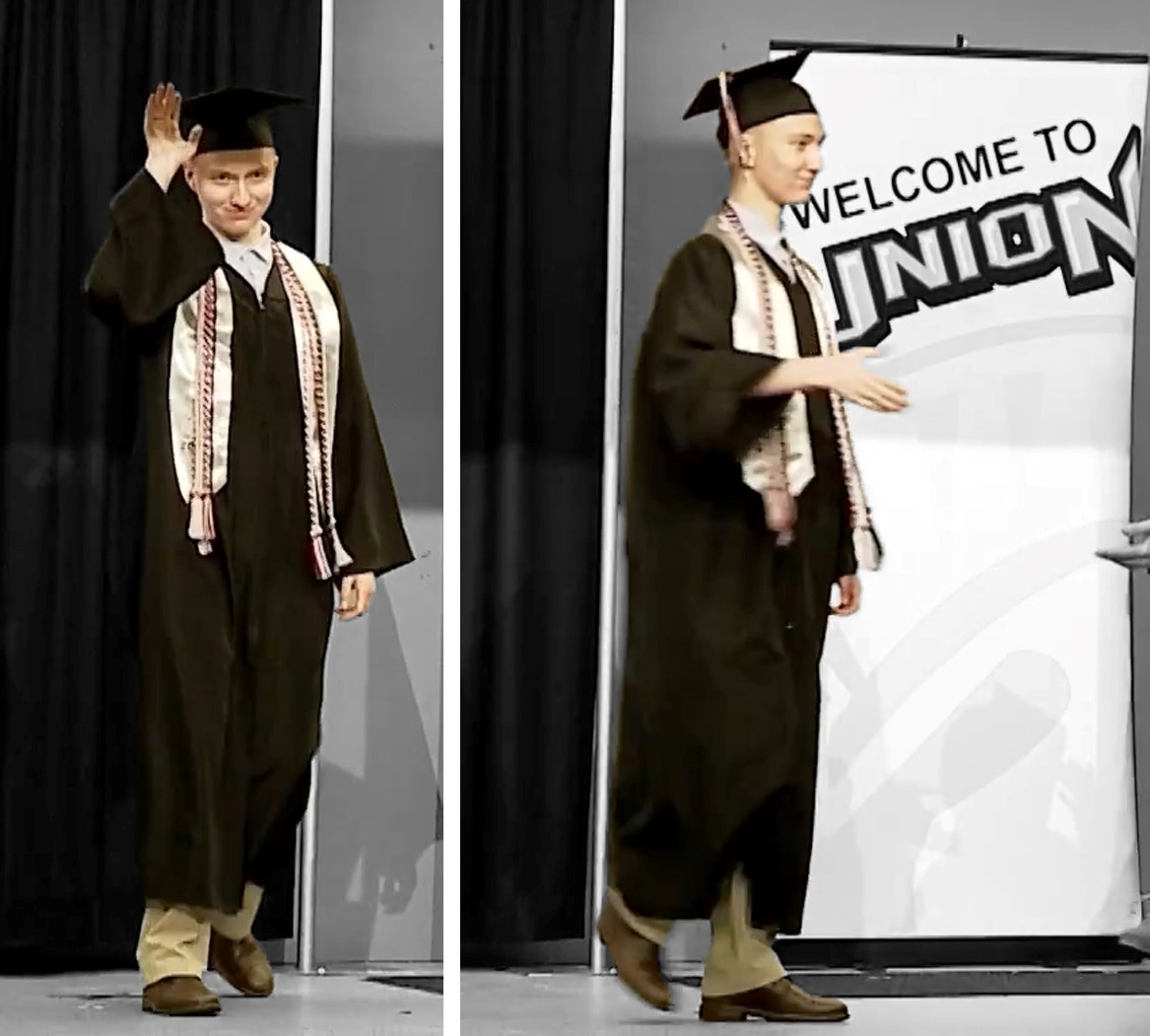 Maxwell Myers graduated from Union High School in Vancouver WA. He was class of 2017 and now attends the University of Washington. 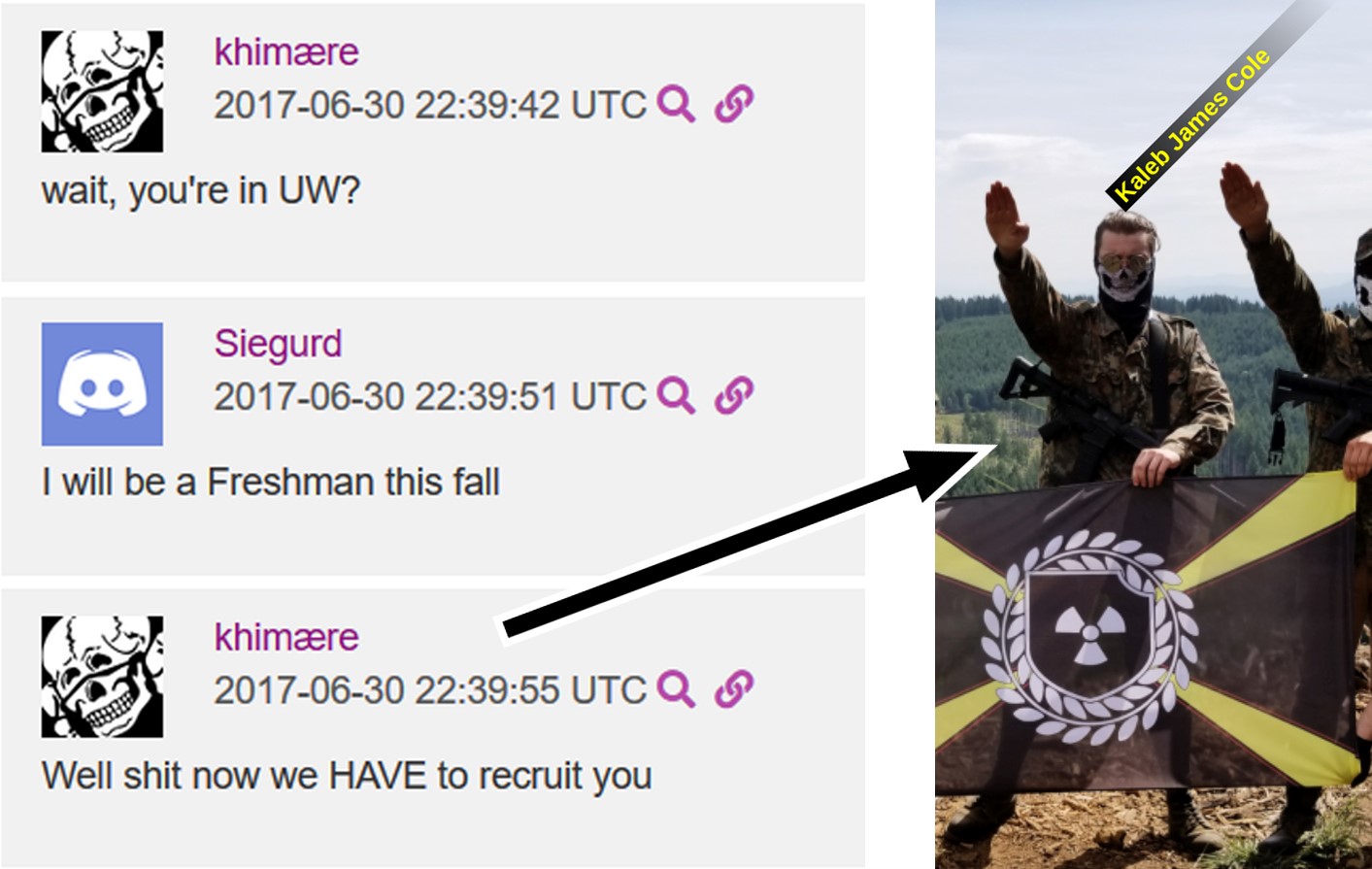 After Maxwell Myers AKA Siegurd tells the CCC Discord chat that he is attending UW in fall, Atomwaffen Washington cell leader Kaleb James Cole suggests recruiting him for Atomwaffen.

Maxwell Myers notes that Atomwaffen made a joke about “Sieg Hall” in their YouTube description. The Nazi terror group targeted the UW campus in January 2017 and again in February 2017.

Maxwell Myers is very anti-Semitic in the CCC Discord chat. 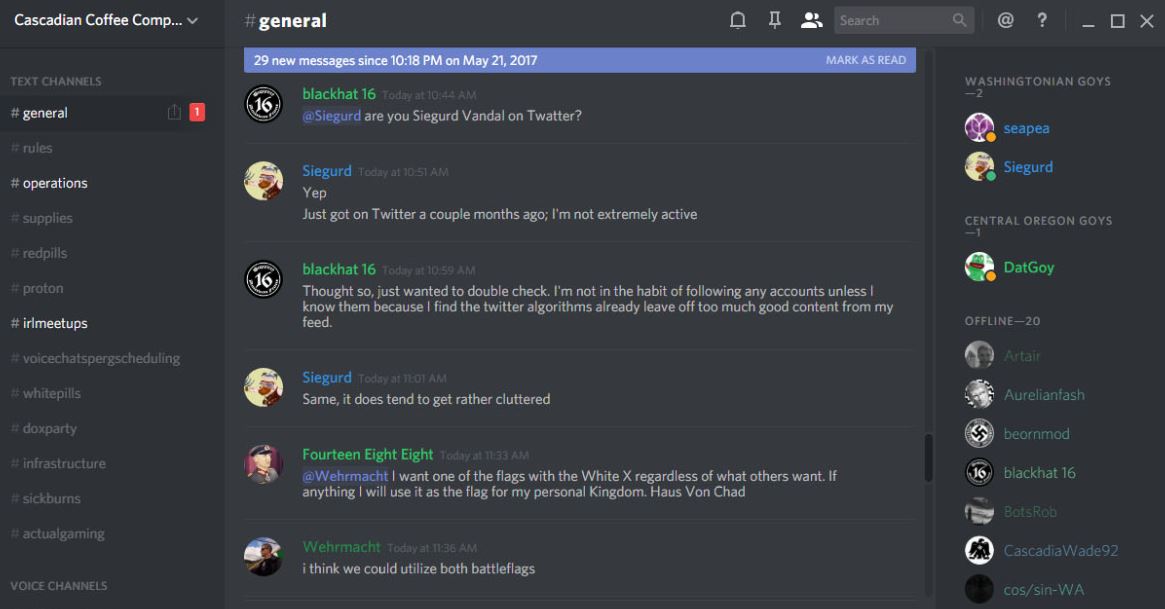 Maxwell Myers and members of the PDX Stormer Book Club attended the February 10th Seattle rally along with an assortment of other white supremacists and fascists. Identity Evropa members including James Allsup were present, as was Patriot Prayer supporter and accused rapist Kyle Jacob Broussard. Max and the PDX Stormers were dressed in the Stormer Bookclub “uniform,” which consists of a black baseball cap, American flag bandana, and red New Balance shoes. Max was joined by Vancouver, Washington Nazi Alexander Becker and sex offender Jarl Rockhill. The PDX Stormer cadre milled around the far-right rally before walking towards an on campus parking garage with numerous members of the Cascade Legion. 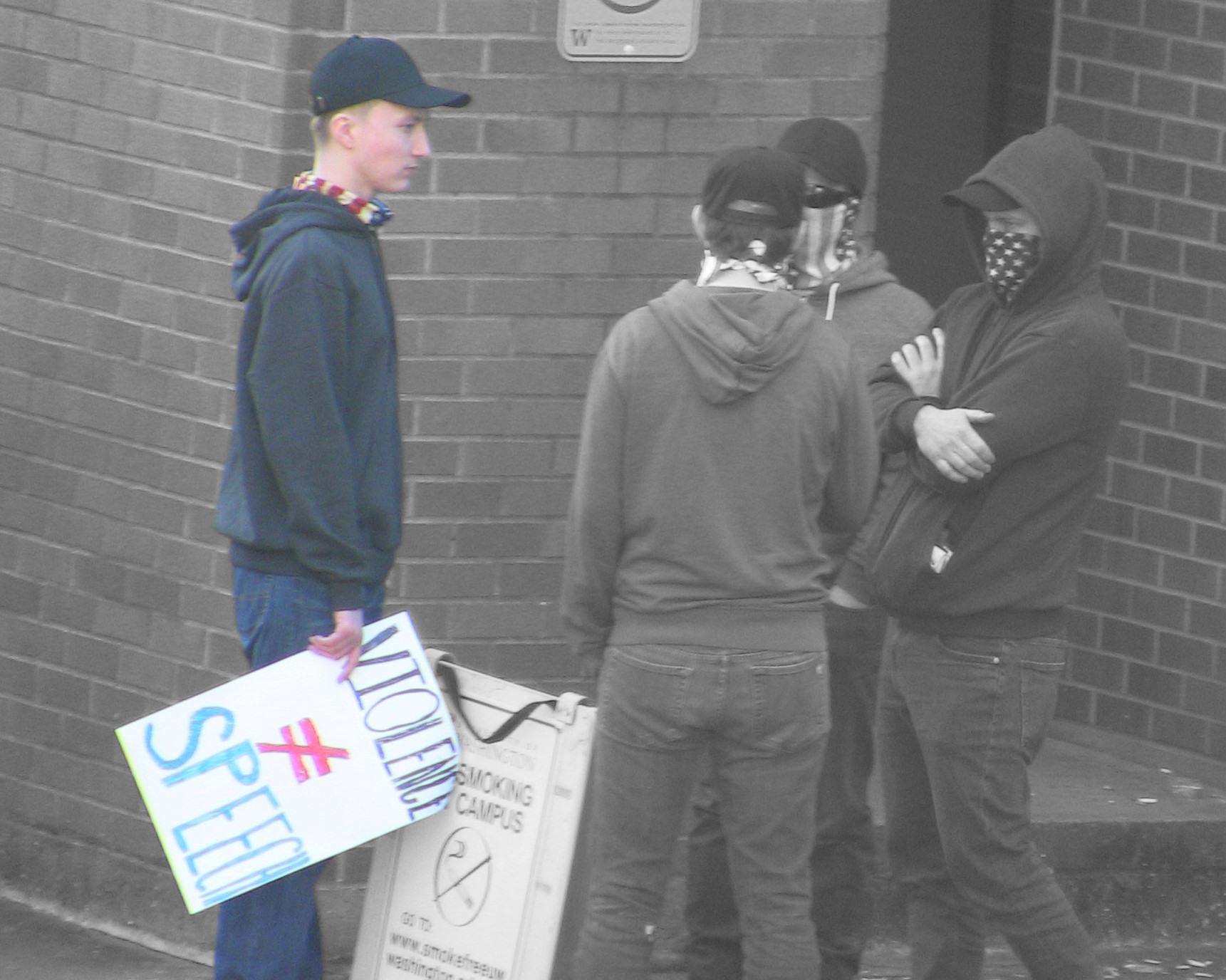 Maxwell Myers stands with his fellow Stormers Jarl Rockhill (rightmost) and Alexander Becker (second rightmost) at Joey Gibson’s February 10th 2018 rally on the University of Washington. Max is dressed according to the classic “Stormer” dress code. 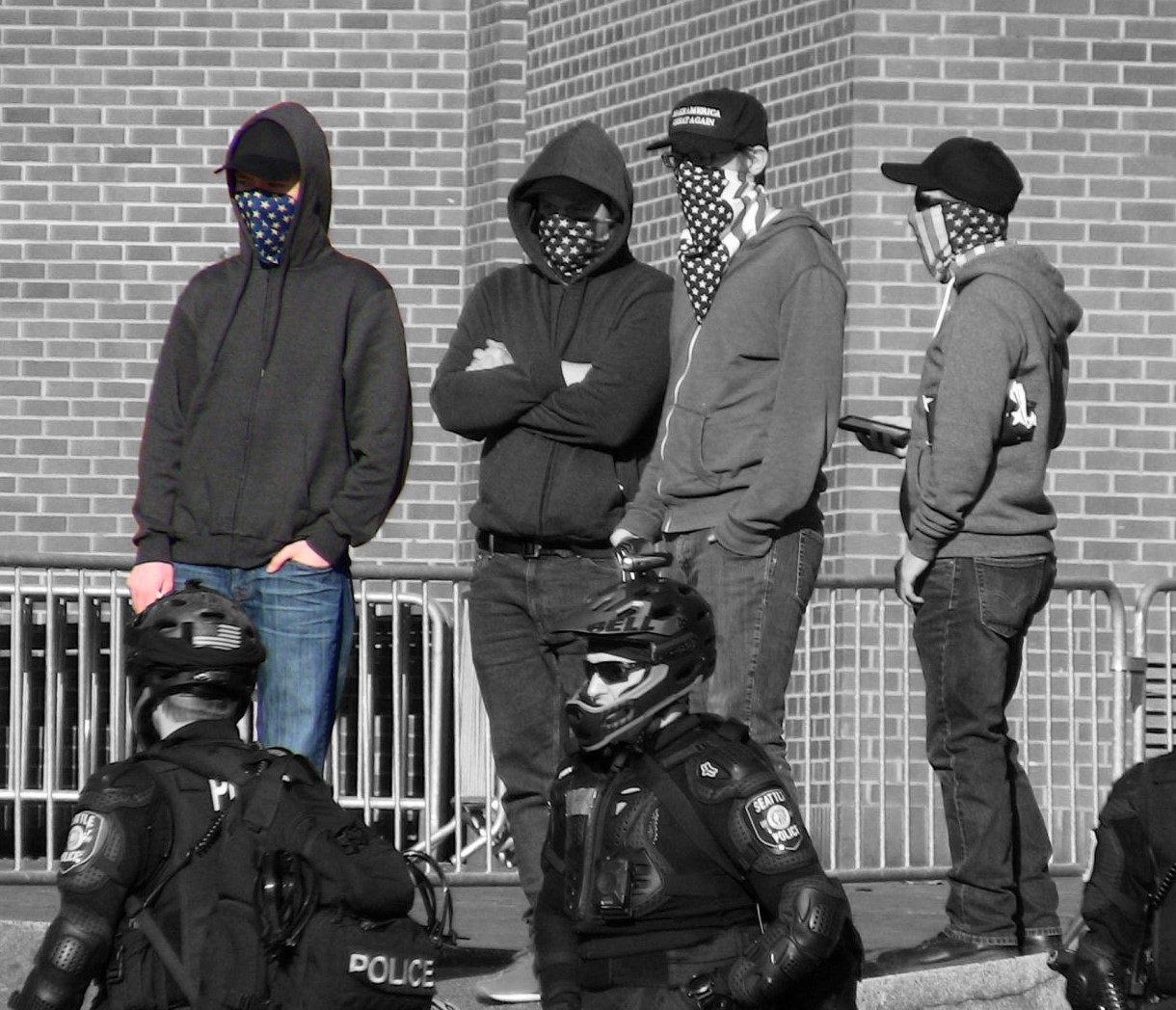 Maxwell Myers stands behind the saftey of riot police at Joey Gibson’s February 10th 2018 rally. He is joined by Jarl Rockhill, Alexander Becker, and a third member of the Stormer Book Club. 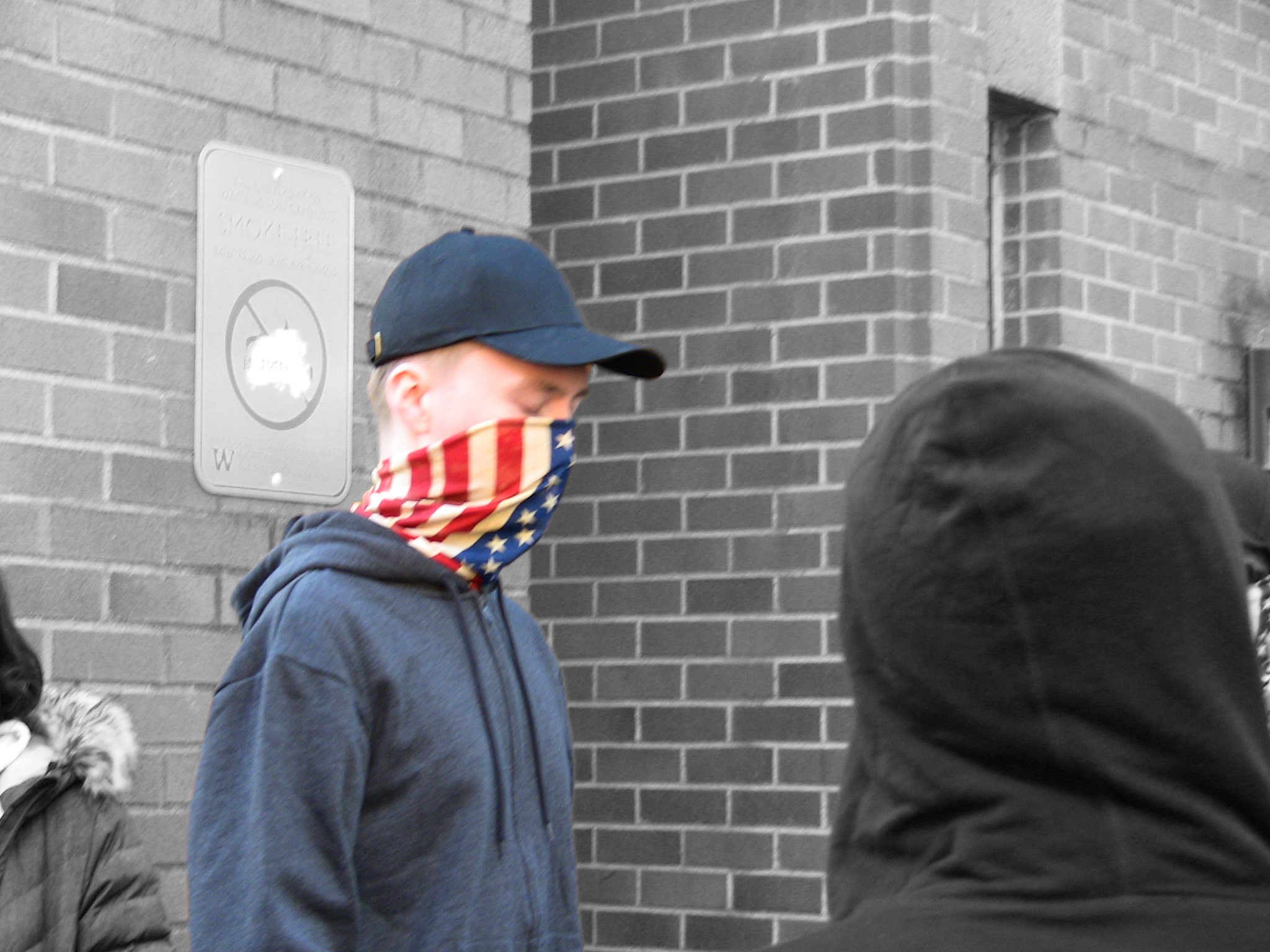 Maxwell Myers tries to conceal his identity with an American flag bandana.

In October 2018, Maxwell Myers became a dues-paying member of Identity Evropa, since rebranded as American Identity Movement (abbreviated as ‘AmIM’ to avoid confusion with the American Indian Movement). Identity Evropa/AmIM is a neo-Nazi group led by Patrick Casey  and played a central role in organizing the deadly 2017 Unite the Right rally in Charlottesville, VA. In 2018, a dues-paying member of the group vandalized and attempted to torch an Indiana Synagogue. Earlier this year, Unicorn Riot published thousands of messages from the group’s private Discord server. Since the leaks, dozens of Identity Evropa/AmIM chuds have been identified by antifascists. 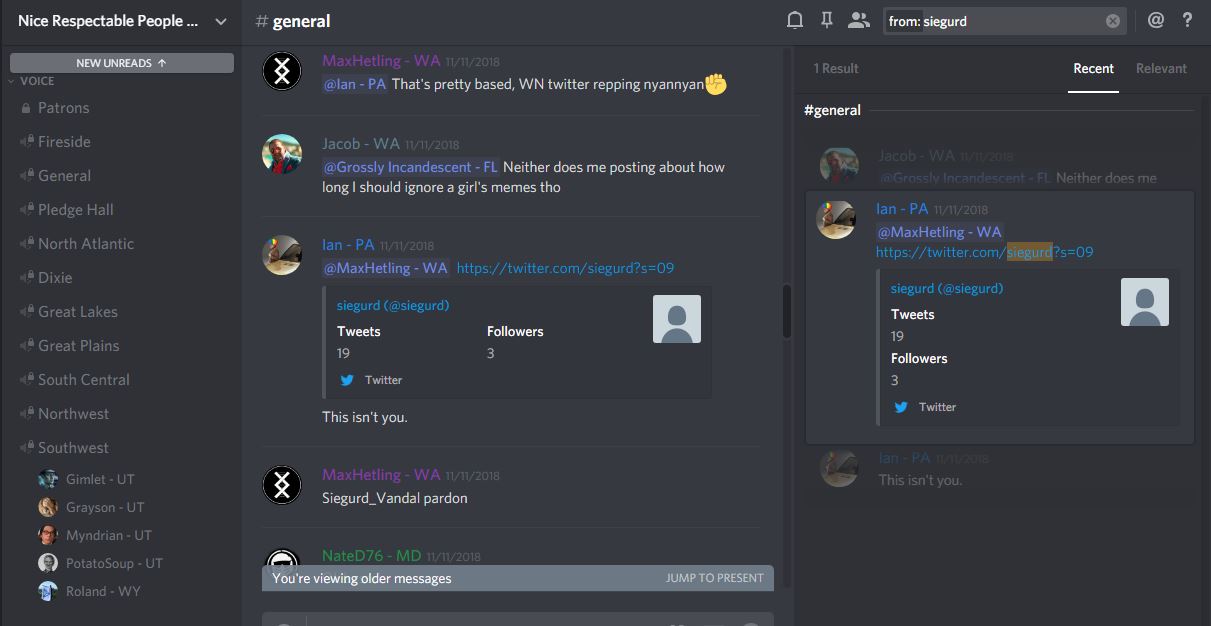 Maxwell used the display name “Max Hetling” on the members-only Discord server called the “Nice Respectable People Group.” Maxwell’s username may be a reference to Konrad Meyer-Hetling, a figure in Hitler’s SS who helped formulate the Nazis plan for ethnic cleansing in Europe. Maxwell joined the server two weeks after leader Patrick Casey traveled to Seattle, Washington. Many of Maxwell’s messages are explicitly racist and Islamophobic. In one message, Max argues that imprisoned neo-Nazi terrorist James Alex Fields should have only been charged with manslaughter for his vehicular attack that left Heather Heyer dead. Max frequently interacts with Jacob Labudda, an Identity Evropa member from Cheney, Washington who sent more messages in the IE/AmIM chat than any other user. After the Identity Evropa rebrand that followed the Discord chat leak and subsequent doxxes, the group started using a messaging platform called “Mattermost.”  Maxwell maintained membership, using the display name “Siegurd” for some time.

Maxwell Myers AKA “Max Hetling” has that fellow Nazi bud James Alex Fields, who drove his car into anti-racists during the 2017 Unite the Right rally, can win his appeal. 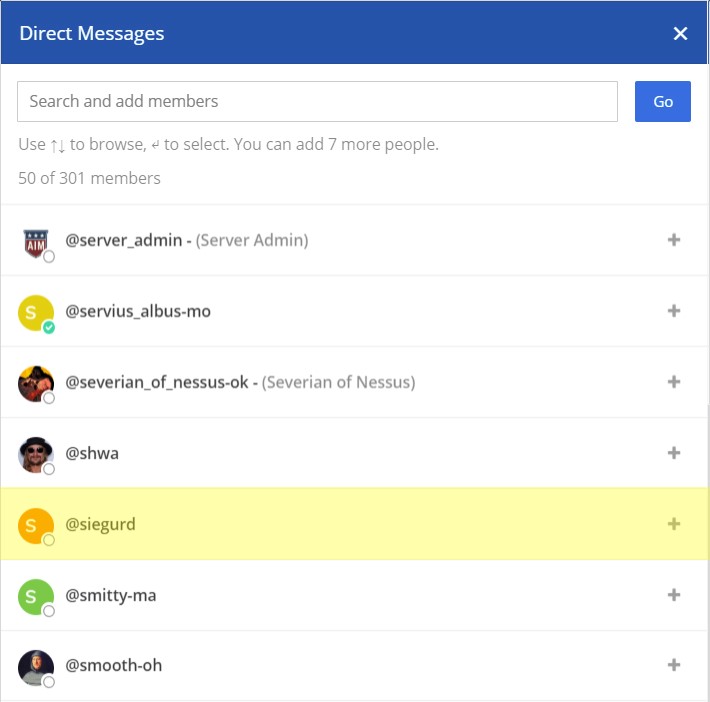 After the Discord server was leaked Identity Evropa changed to AmIM and started using Mattermost for communication. Maxwell Myers was still a member, using his old alias “Siegurd.”

In addition to being a member of two neo-Nazi groups, Maxwell maintained several hate-filled accounts on video sharing platforms. On his YouTube channel, Max features a video titled “Jared Taylor’s Warning to White America,” which he uploaded in November 2018. Jared Taylor is a prominent white supremacist figure and founder of American Renaissance. Taylor is a strong supporter of Identity Evropa and even attended their 2018 “Leading Our People Forward” (LOPF) conference. Maxwell also has a Vimeo channel that contains clips from the Christchurch Mosque attack in which a Far-Right extremist took part in a terrorist act shooting leaving 49 people dead. The horrific attack was widely celebrated by the Far-Right, especially on the Daily Stormer. (Please report his Vimeo account here.) Maxwell is fairly active on Twitter as “@Siegurd_Vandal;”  he follows a plethora of alt-right Twitter accounts including the University of Washington College Republicans. Maxwell is also active on Reddit, where he uses the username “Makratus.” He has logged many bigoted posts and comments on the website. For the last year or so, Max has also been a frequent contributor to the “r/steroids” subreddit. He uses steroids to pursue his “strongman” ambition, which is unsurprising considering his fascist worldview.

Maxwell Myers has a YouTube channel that features a short clip from long-time white supremacist figure Jared Taylor. Some of his family members “subscribe” to this channel. 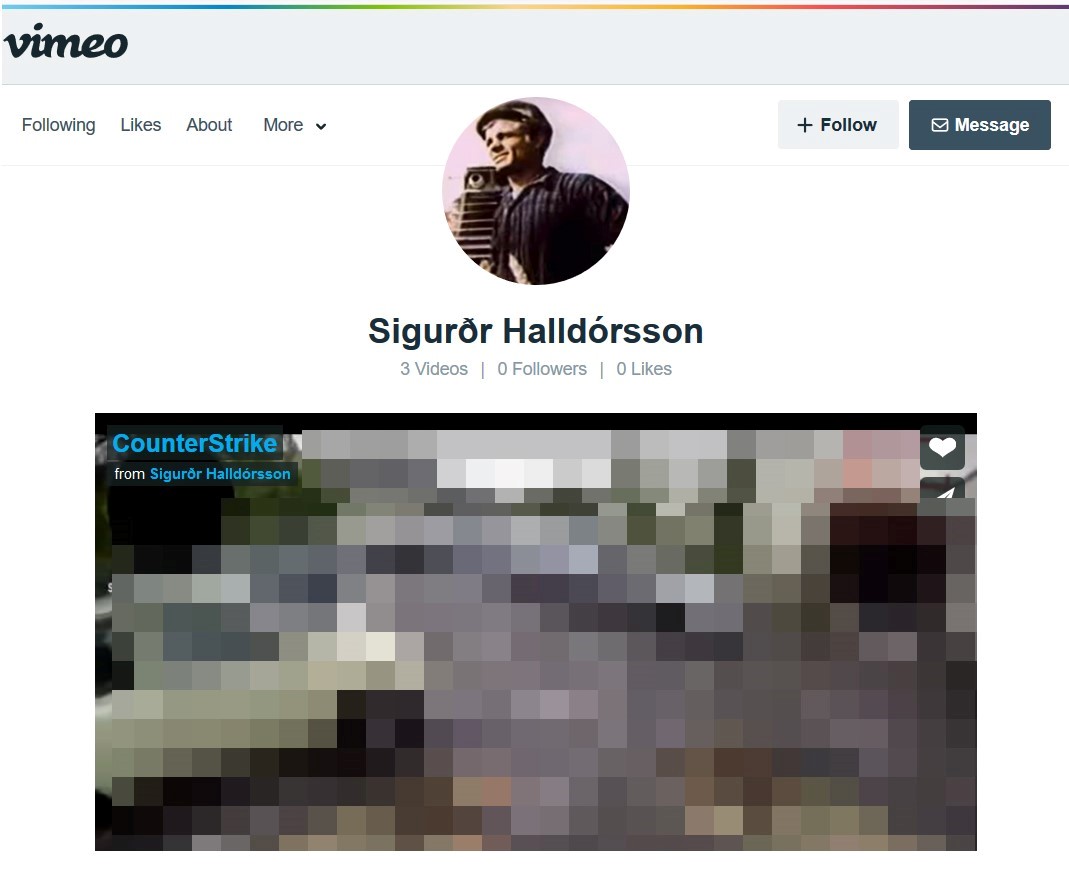 Maxwell Myers has a Vimeo channel that features clips from the Christchurch massacre (we have blurred the thumbnail of the video). The attack was livestreamed by the fascist attacker. Please report his account here 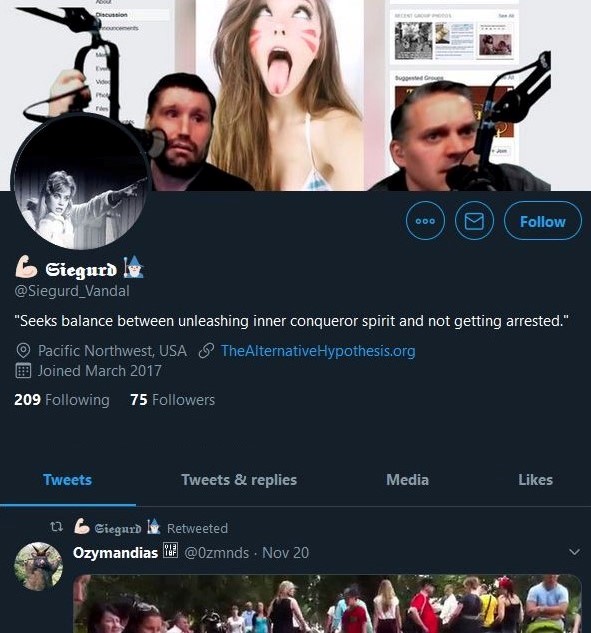 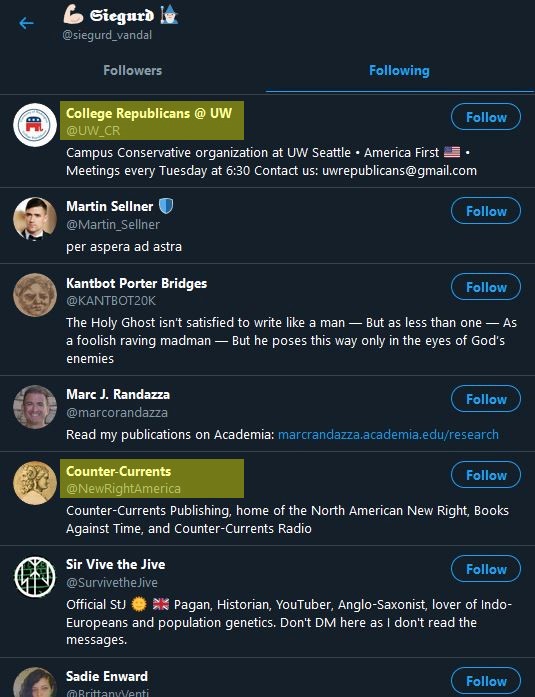 On Twitter, Maxwell AKA “Siegurd_Vandal” follows the account for the University of Washington College Republicans. He also follows Counter-Currents, a white supremacist publishing house that has promoted James Mason’s “Siege” among other titles. The editor-in-chief of Counter-Currents is Greg Johnson, who was revealed to reside in Seattle as of last year. 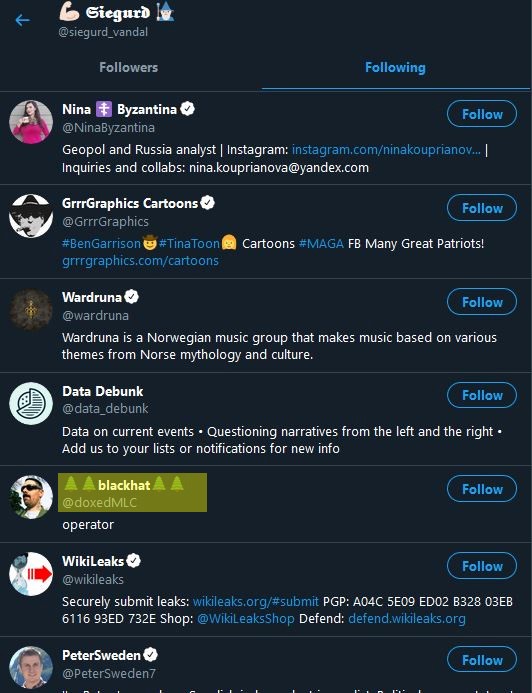 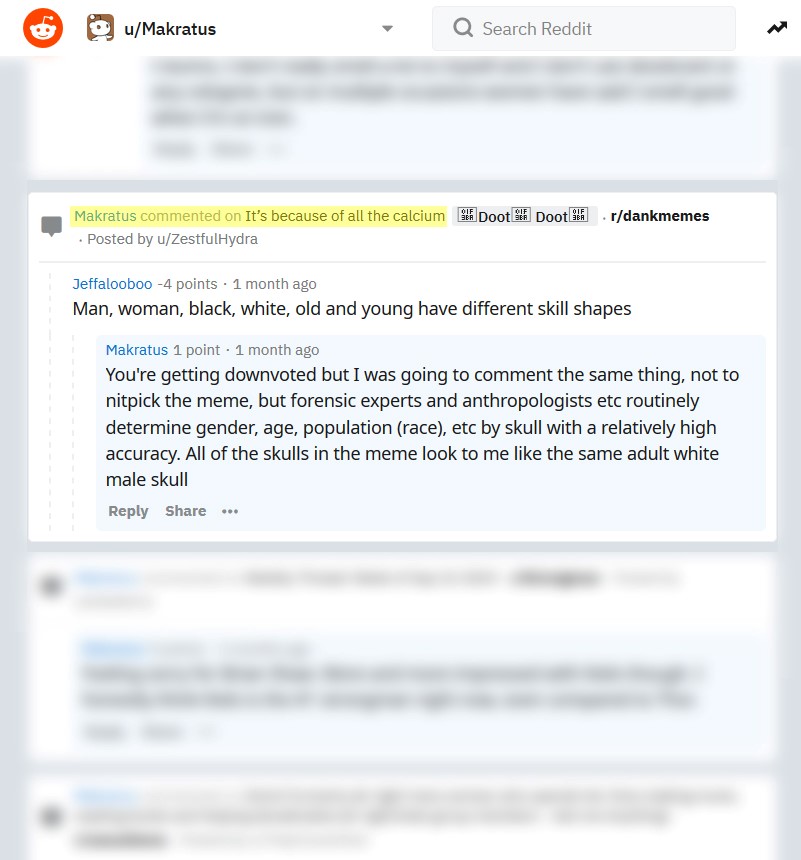 Maxwell Myers AKA “Makratus” is a big phrenology fan. Maybe he can land a position at Quillette. 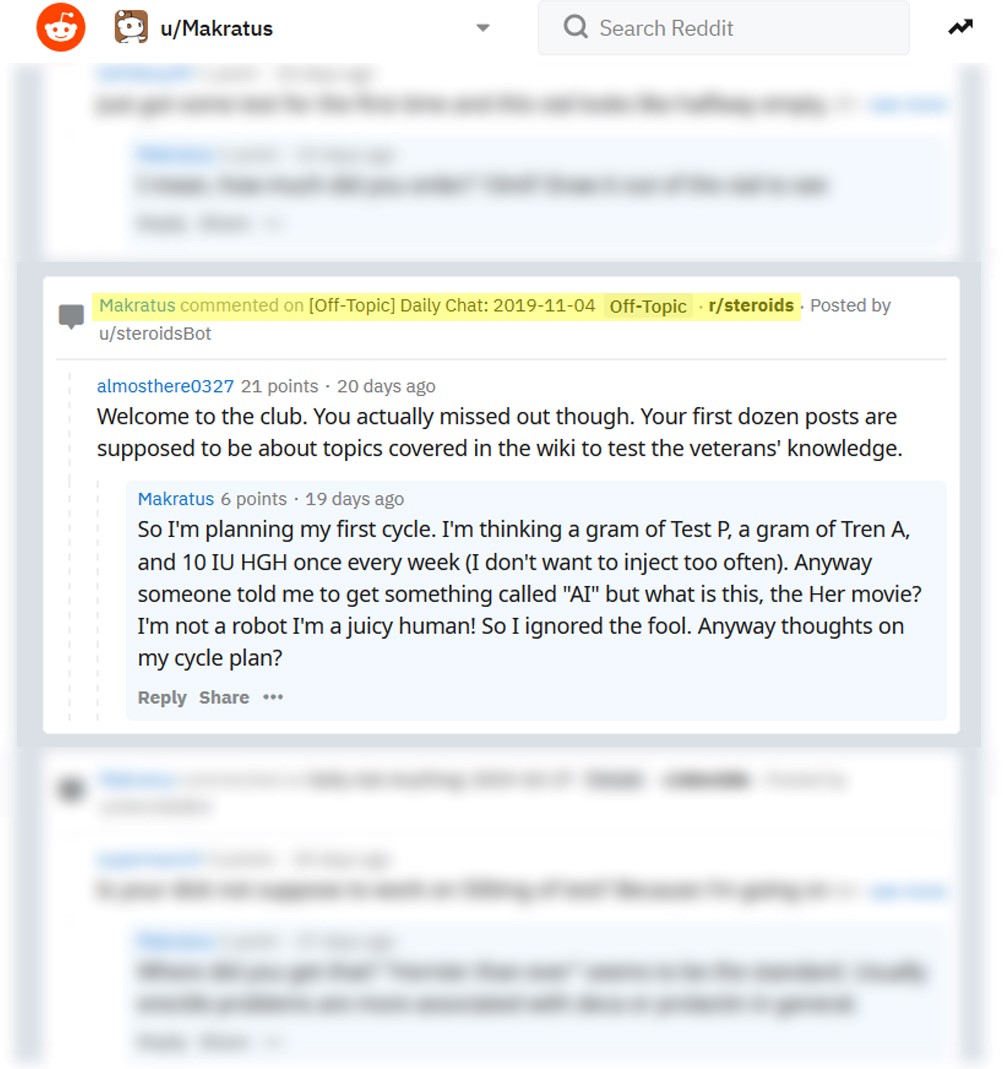 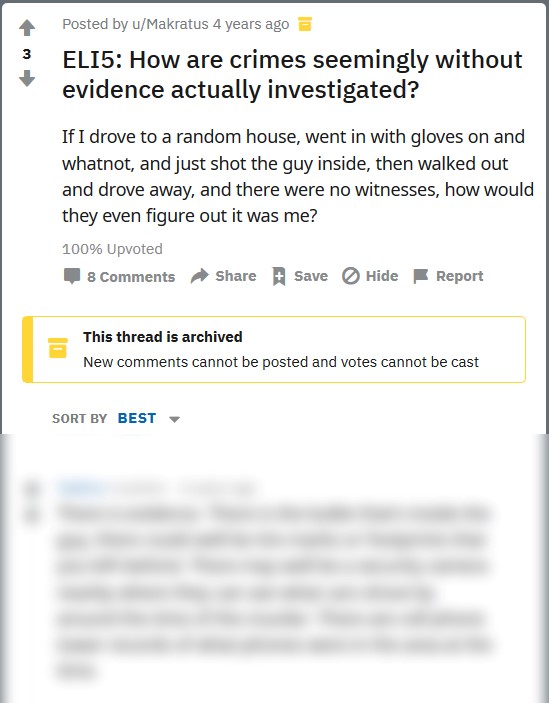 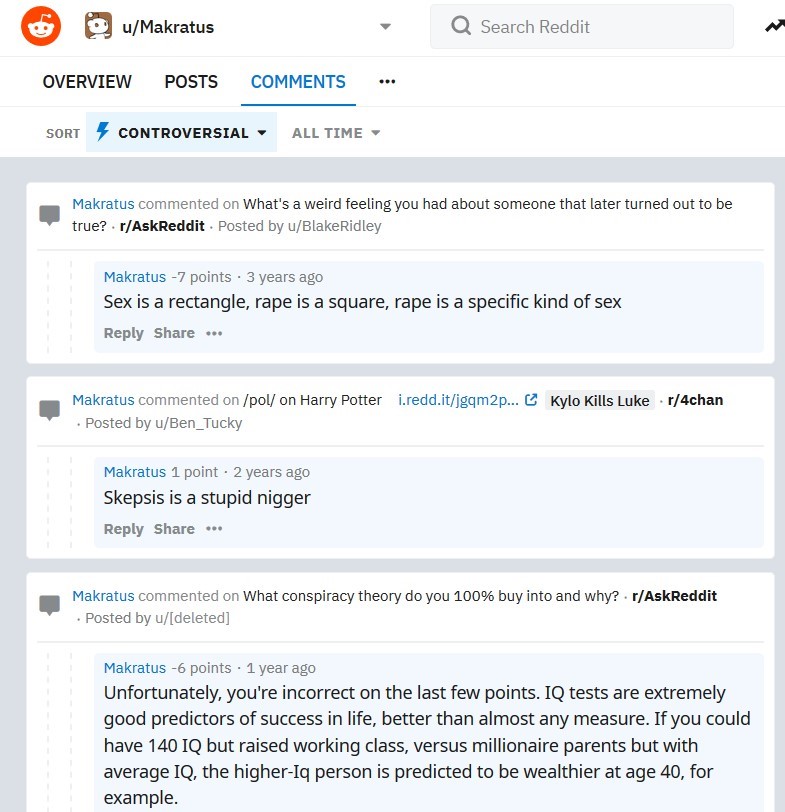 Maxwell Myers was a teenager in high school when he began to network with some of the most dangerous, violent, and extreme neo-Nazis in the Pacific Northwest. Maxwell cultivated his neo-Nazi ideology and networking online and soon moved to in-real-life action with other local neo-Nazis. But where did this all really begin? Was Maxwell influenced in his high school? Was white supremacy modeled in his family? Did he have a lack of healthy childhood and young adult socialization? These are questions we may not be able to answer, but we can take precautions against the very real danger Maxwell Myers poses to our communities.

Maxwell Lucas Myers is currently a student at the University of Washington. Current intel leads us to believe he is still a member of the American Identity Movement. His online presence suggests that he is a dangerous and potentially violent person. If you have any additional information about Maxwell Myers or his activity, please contact your local antifascist group or email us at: EugeneAntifa(at)Protonmail(dot)com. 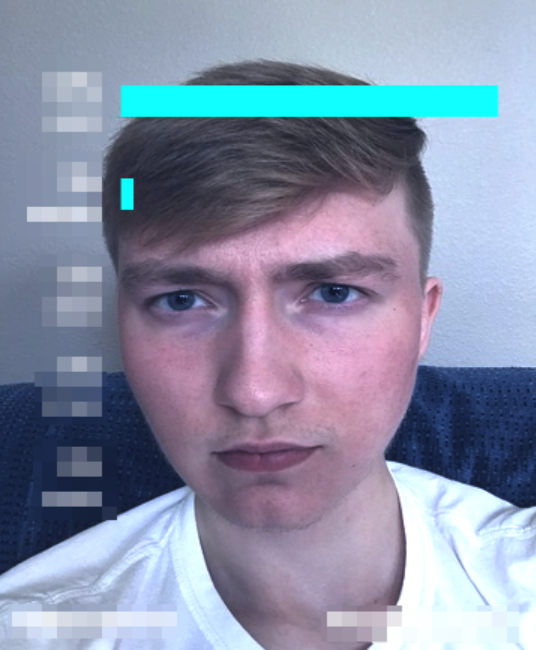 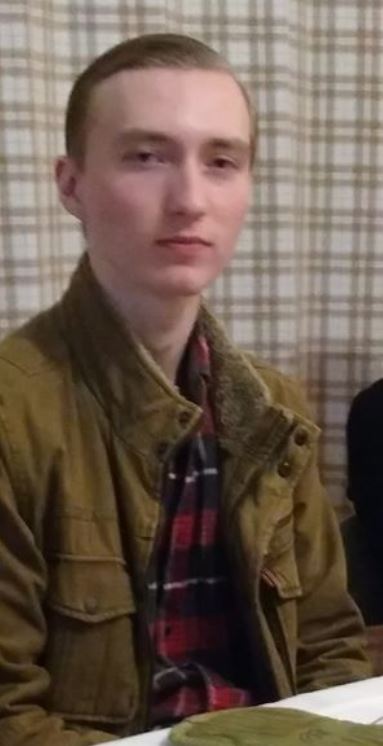 Maxwell Myers graduated from Union High School in Vancouver WA. He was class of 2017 and now attends the University of Washington.

Maxwell Myers stands with his fellow Stormers Jarl Rockhill (rightmost) and Alexander Becker (second rightmost) at Joey Gibson’s February 10th 2018 rally on the University of Washington. Max is dressed according to the classic “Stormer” dress code. 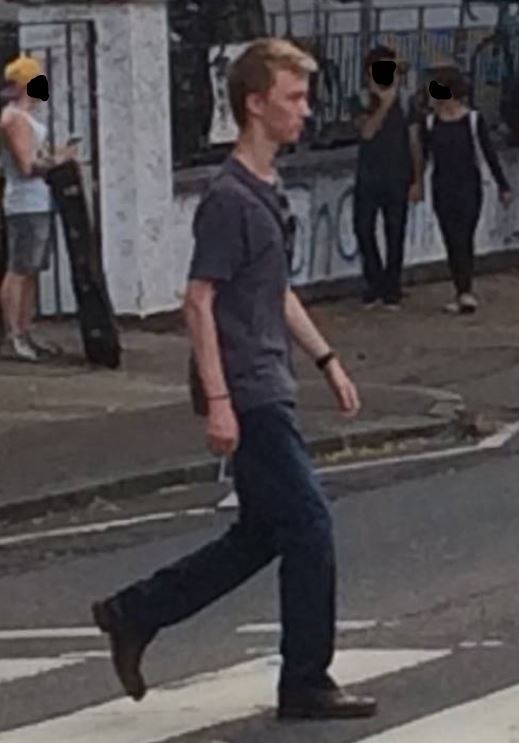 Location: University of Washington at Seattle

Contact the University of Washington and let them know that Maxwell Myers violates the student code of conduct because he is a neo-Nazi. Call *67 206-685-6194 or email: cssc@uw.edu

For information about UW’s student code of conduct, see: https://www.washington.edu/cssc/for-students/student-code-of-conduct/