The many faces of Gena Marie Stroud

Having come to Nazism via the Black Metal scene, Gena Marie Stroud has been known to make flagrantly racist remarks and white supremacist diatribes. She was in a long term relationship with neo-Nazi Paul Aaron Masiko Bonnen, as well as, maintaining ties with other neo-Nazis from the now defunct Volksfront. This includes a long term friendship with Eugene area local neo-Nazi and American Front associate Kevin Ross.

Online, as well as in public, Gena Stroud has been known to use profane, vulgar, and abusive language including death threats, threats to commit bodily harm, and threats to commit personal property destruction. She has also been known to engage in extreme verbal aggression, physical aggression, and object aggression- most especially in relation to those she is romantically engaged with. Perhaps what Gena has become most infamous for, locally, is her obsessive and long term stalking of numerous individuals. Stroud’s stalking behavior has led her to send thousands of unwelcomed, off-hinged, and graphically threatening Facebook messages, text messages, phone calls and voice messages along with egregious comments and posts on social media. Stroud often attempts to steal clothing and impersonate individuals she is stalking and harassing and has even attempted to romantically pursue individuals close to her victims in order to gain closer access. This behavior has caused the disruption of her victims’ lives; some have even had to move and seek restraining orders against her for the safety of themselves and their families.

After an extensive manhunt and ultimate apprehension by the SWAT team, Gena Stroud was most recently arrested for harassment in July 2018 in Eugene, Oregon. Stroud had a total of 6 warrants out on her at the time of her arrest.  Stroud is known to have stalked at least 6 women and 3 men. One individual Stroud has stalked for going on 12 years. In a 2015 plea-deal involving the Lane County District Attorney’s Office, a five year ban from the Internet was imposed on Gena Stroud (which she violated). Stroud was also given time on violating a stalking order (a total of 45 days) and five years probation. According to jail records, Stroud has been arrested six times in 2015 alone: all for violating a stalking order. She is currently in custody with an upcoming Lane County court pre-trial conference hearing on August 20, 2018 at 2:30pm and a six person jury trial on August 30th, 2018 at 9:30am. 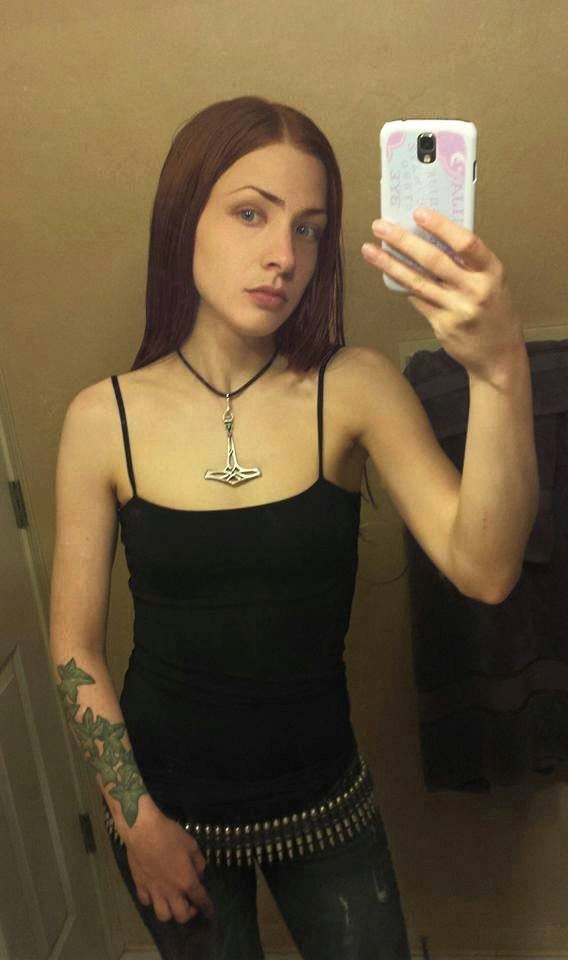 Gena Marie Stroud, with an ivy tattoo on her arm, wears a Hammer of Thor necklace

The “Mjölnir” pendant around Stroud’s neck in the photo above is also known as “Thor’s Hammer,” has been a prominent feature in Viking lore, and has become the symbol of the Asatru faith found in early tribal Scandinavian tribes that constitutes the bulk of Teutonic-Norse Mythology. While not necessarily being a symbol of hate, it has however, been long since appropriated by neo-Nazis in an interpretation that is popularly known as “Folkish/Volkish” Astatru which is where it gains its popularity as a symbol in modern times.

Gena Stroud aka “Genevieve Romito” describing herself in racist terms 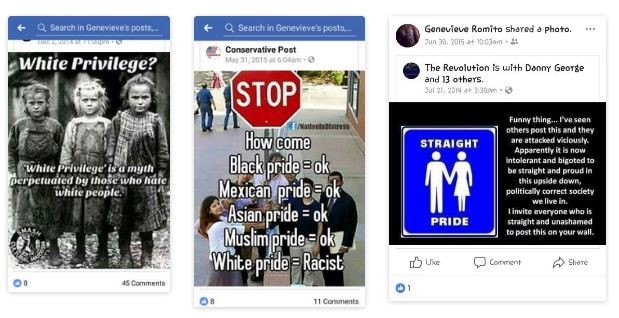 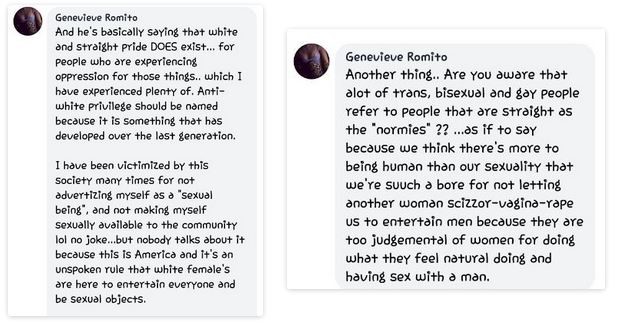 Gena Stroud aka “Genevieve Romito” laments on the challenges of being an oppressed white, straight woman

Gena Marie Stroud has had a pattern of engaging in friendships and romantic relationships with very dangerous men, the details of which we will explore below. 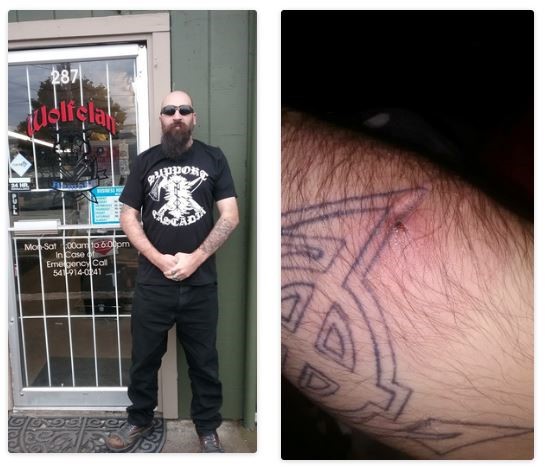 Facebook comments in particular have been found online between Gena Marie Stroud, Reed Zander (her current boyfriend), and Kevin Ross that can be seen below. Note the sexist/misogynistic comment at the very top coming from Ross, followed by his tacit admission to being a neo-Nazi found at the very bottom. “14/88” is stereotypical Nazi fascist numerological code. “14” stands for the “14 words”, or: “We must secure the existence of our people and a future for white children.” “88” represents the letter “H” twice in the English alphabet, where: “88”= ”HH,” or “Heil Hitler.” 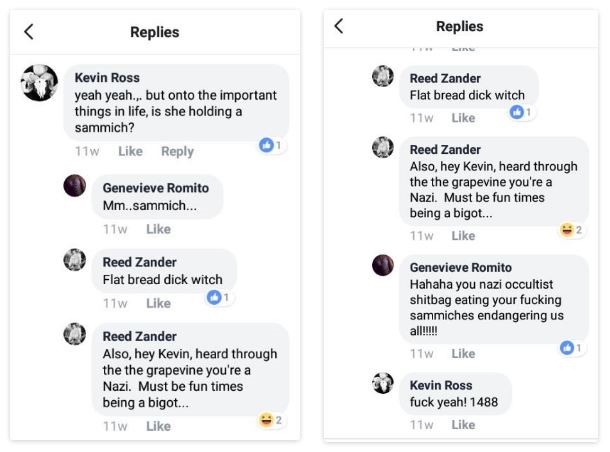 Gena Stroud aka “Genevieve Romito,” Kevin Ross, and Reed Zander, all of the Eugene area, banter on Facebook in acknowledgement of Ross’ open neo-Nazi positioning

In 2010, Gena Stroud was documented with her boyfriend Paul Bonnen at a Volksfront gathering via a leaked, four page photo series released by Rose City Antifa. Paul Aaron Masiko Bonnen is a neo-Nazi known to have been part of the now defunct National Socialist Black Metal (NSBM) band Immortal Pride and went by the name “Draugr.” Bonnen is a convicted sex offender and at one time lived in Albany, Oregon. He played alongside Justin Endicott (aka “Volkstahl”) and members of Panzergod, a Portland based black metal band, in the “no politics” black metal Echoes of Emptiness.  Bonnen shares with Greg Lehr, drummer for Immortal Pride, a pronounced love of posing in front of Nazi flags and then posting the pictures of himself on the Internet. 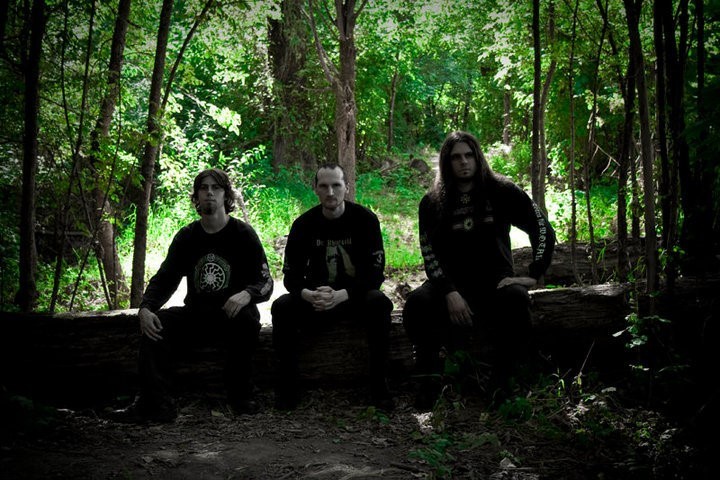 There was more than a certain irony that neo-Nazi propagandist Paul Bonnen at one point called for people to respect “diversity.” Immortal Pride members did not have a track record of preaching respect or diversity, to say the least.

Greg Lehr sang “From the shade of tolerance / comes the racial death” in the song Aryan Winds performed by his solo project SchwarzSonneZorn. When he posted these lyrics online, his fellow band member in Immortal Pride, Justin Endicott, commented: “Your best creation to date brother!” (Lehr afterward tried to distance himself from Immortal Pride).

Immortal Pride lyrics such as the song Vinland Elite were clear calls for genocide: “We must decimate the scum / with superior fire power [… ] Your tribe will be forgotten / your filthy lies erased”

It is therefore rather odd that Paul Bonnen afterward claimed that “respect [for] each others opinions [sic] and individuality” was “the Immortal Pride way.”

It is ludicrous to claim that the members of Immortal Pride “are not bigots or hate mongers.” Immortal Pride’s old webpage used a picture of burning bodies at Auschwitz as decoration, while Bonnen enjoyed displaying photographs of himself making stiff-arm Nazi salutes (also referred to as the “Roman Salute”). The group played neo-Nazi gatherings and is affiliated with Volksfront International and Blood & Honour American Division. This would appear to be rather extreme hate-mongering. In fact, Bonnen has been known to have attended at least one Volksfront event with Gena Stroud.

In the first picture below, both Bonnen and Stroud can be seen posing for a group photo with prominent Volksfront members. They are side by side in the center row and far right of the picture with Bonnen’s arm around her. In the second picture, you can see both mingling in group of attendees with the Volksfront banners appearing prominently nearby. 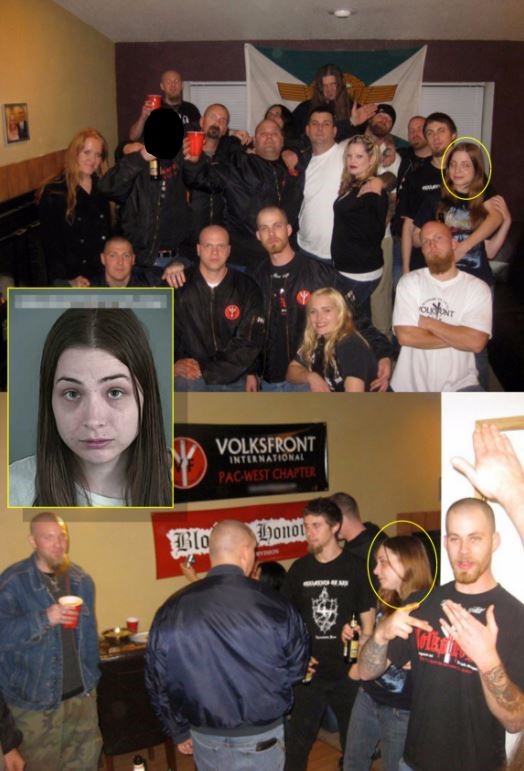 Here is a photograph of Stroud and Bonnen posing in front of a black flag with a prominent red “Sonnenrad” displayed on it. The “Sonnenrad,” also referred to as the “Schwarze Sonne” or “Black Sun” has been known to be used in many currents of occult Germanic neopagan esotericism, most especially in currents that are tied to neo-Nazi ideology (Folkish/Volkish Asatru), which is where this symbol finds its popularity in modern times beginning in the post-World War 2 era due to its existence being discovered in Heinrich Himmler’s Wewelsburg Castle. 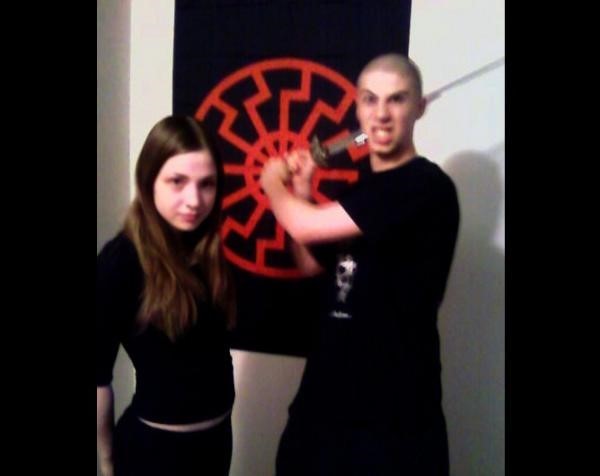 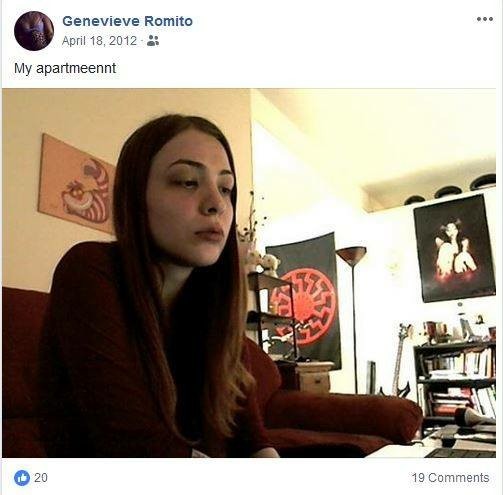 In the following photo, Bonnen is second from the left next to violent neo-Nazi, American Front member, and Greystorm Productions manager Jeff Thomas (aka “Jay Grey”) with a shaved head, and wearing a “Sonnenrad” t-shirt at a neo-Nazi Volksfront get together. 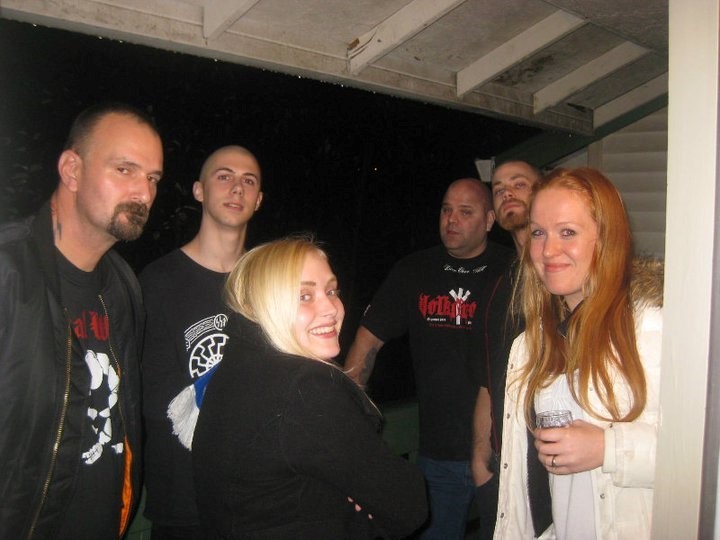 Bonnen poses for a photo in his room with a black flag with red “Sonnenrad” on it. There is also what appears to be a green, white, and red flag displaying the “Algiz” or “Elhaz” rune on it; this rune has been adopted in Nazi occultism through the Germanic mysticism of the early 20th century via Karl Maria Wiligut as symbolizing “life” and called the “life rune” (In German: “Lebensrune“). This term occurs as early as the 1920s in the literature of Germanic mysticism and it came to be widely used within the Nazi Party and Nazi Germany. 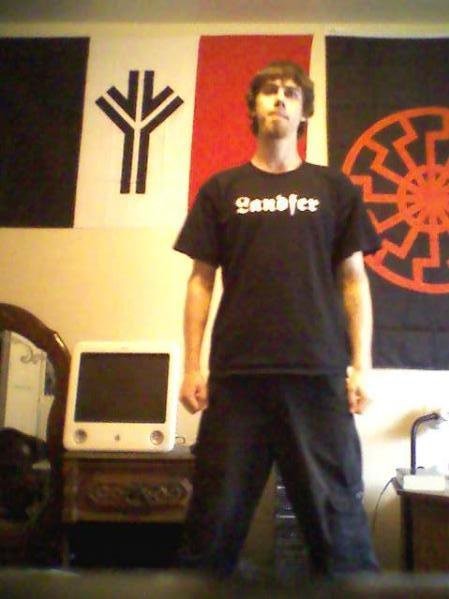 Bonnen is again at the far left posing with his band mates with their arms folded. Note the “Bound For Glory” t-shirt. Bound for Glory started off in 1989 as a Nazi-Skinhead (“Bonehead”) Oi/ Rock Against Communism style band from Minnesota. In 1993, they crossed-over to being a Neo-Nazi Heavy Metal/Thrash Metal band, which unfortunately is still active today. 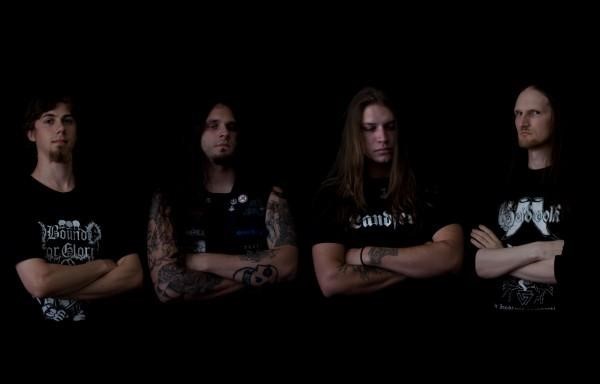 Just prior to her current boyfriend, Gena Stroud was in a relationship with a co-defendant in the 1994 Dari-Mart killing, a hot-tempered and violent alcoholic Dan Paul Rabago aka “Dan the Impailer.” After cooperating with cops by informing on his co-defendants, Robaga was issued a much lighter sentence and at the age of 16 years old, was given 12 years in prison. He is currently on post prison supervision for the remainder of his life. It is worth researching the details regarding this particular case in order to get a better understanding of not only who Rabago was, but who he is today. Rabago lives in the Eugene area and plays in the death metal band Omnihility. 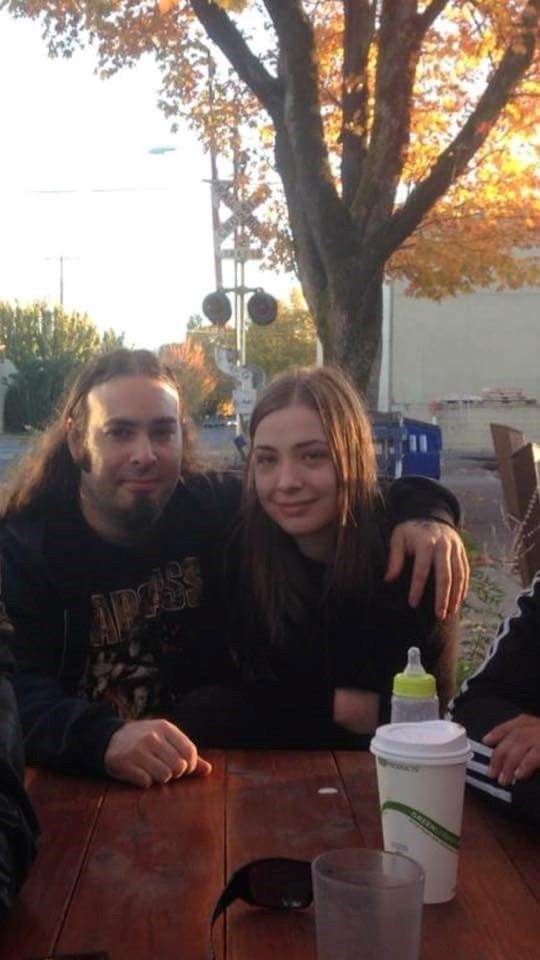 Dan Rabago and Gena Stroud photographed in Eugene, Oregon during the time they were dating

Another dangerous individual Gena Stroud dated was Jesse Steven Richard Markin who has a lengthy criminal record including three charges of rape and sodomy. He was convicted of one felony count.  In June 2017 while in the State of Washington, Markin was arrested for failing to register as a sex offender. 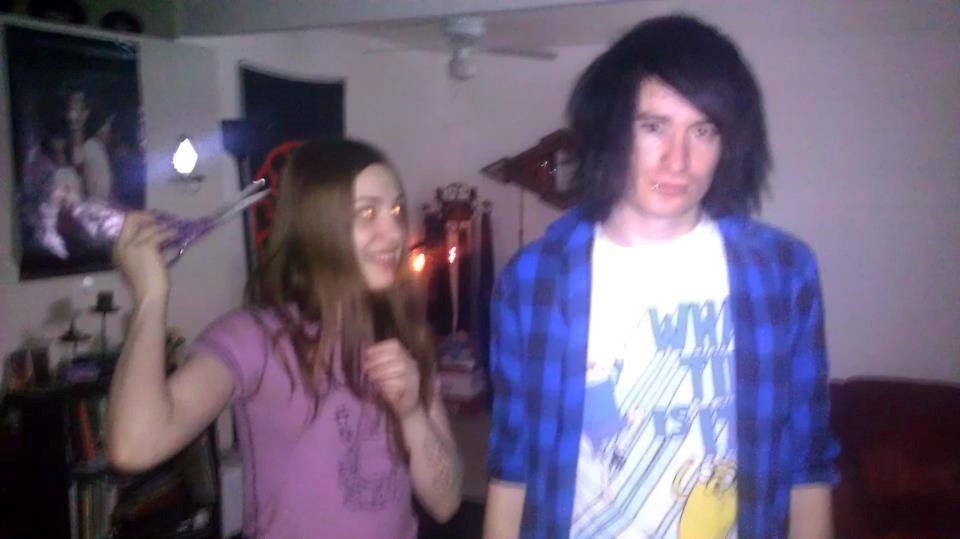 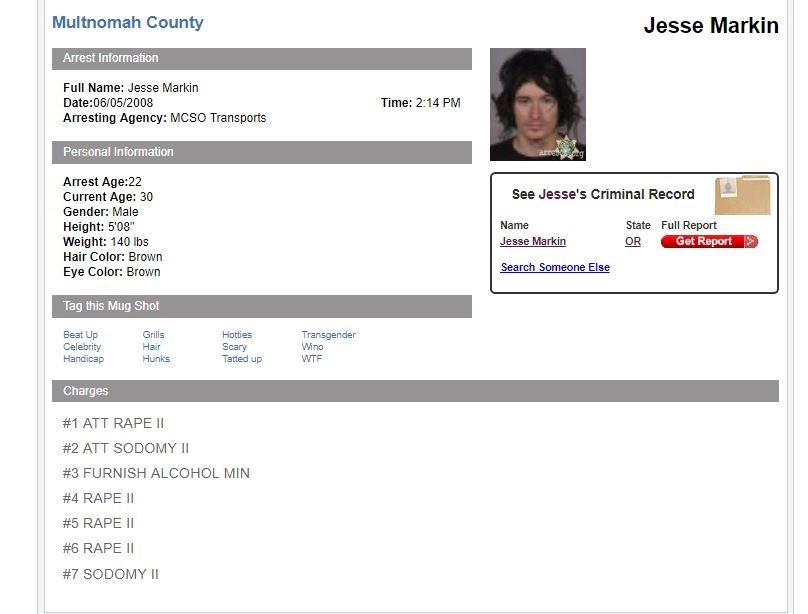 An example of charges Jesse Markin has been arrested for

Reed Zander is Gena Stroud’s current boyfriend and has been her on and off again boyfriend for the last 2 -3 years. Zander likes to fancy himself as a punk-rocker. However, Zander has conveniently forgotten one of the major aspects about being a part of the punk rock scene: the hard-line stance against racism, fascism, and most especially Nazi fascism. 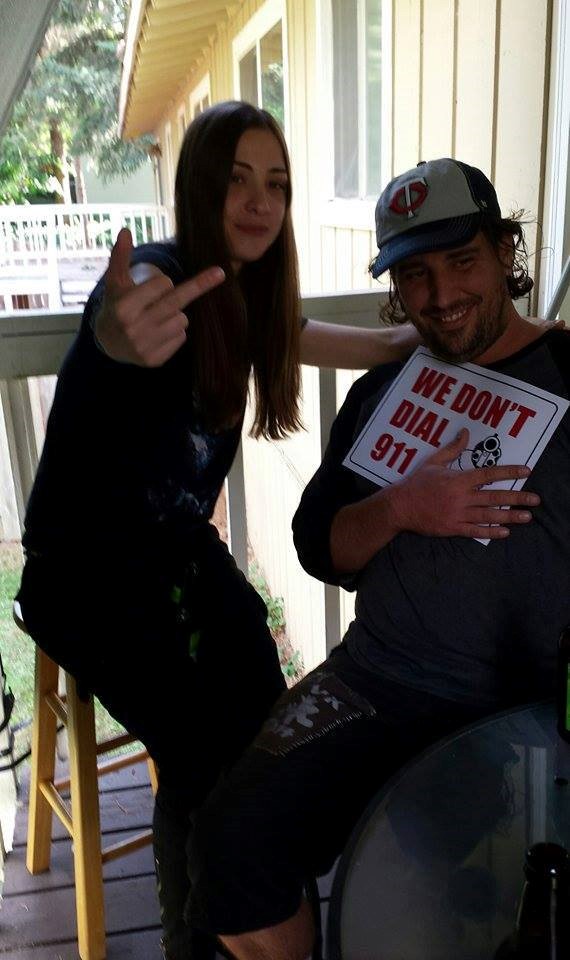 In closing, it needs to be emphasized,  given the severity of Gena Marie Stroud’s personality disorder issues, her sympathies and ties to neo-Nazism, her grossly unethical, abusive, and violent behavioral issues towards others- that all persons (especially those who know her personally) cease attempting to prove any moral, material, physical, or financial support. Be on the lookout for this dangerous individual living in our community!

Last words from a racist, homophobic, and dangerous Gena Stroud. She is a fascist creep.

Note:  In the past, she has also been known to live with her mother, at times, in Portland, OR 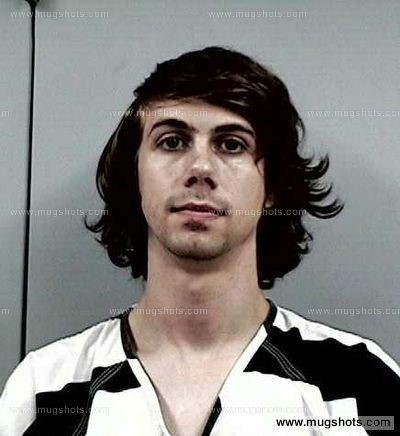 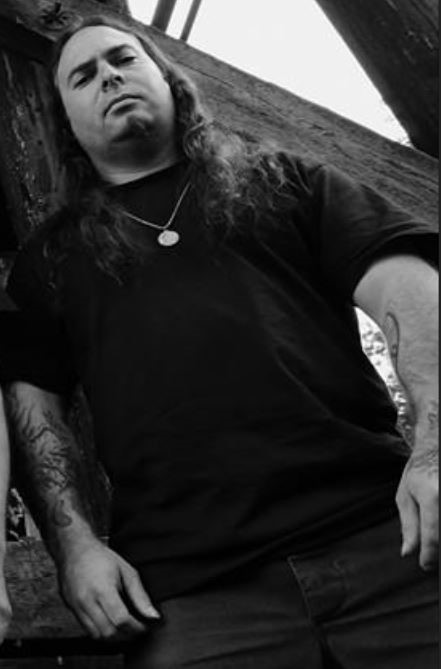 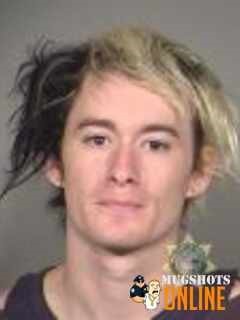 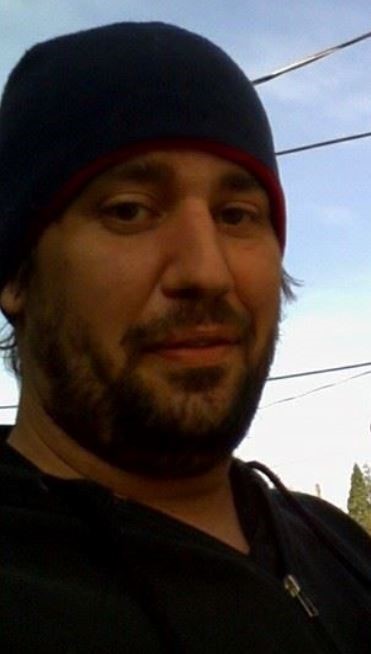 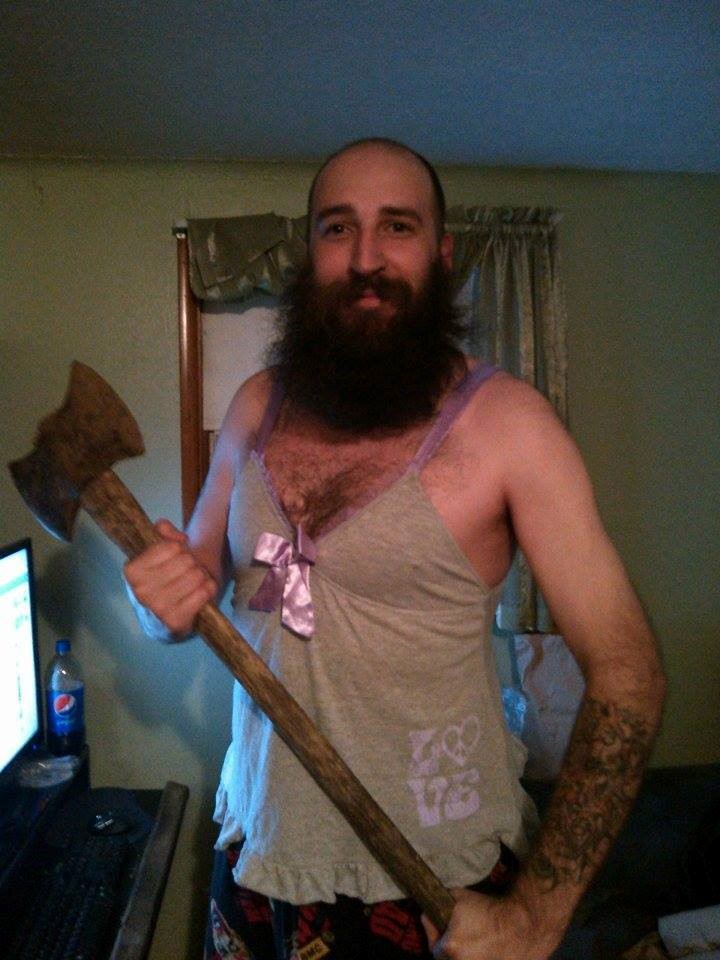 To report racist or fascist activity, email us at: eugeneantifa@protonmail.com 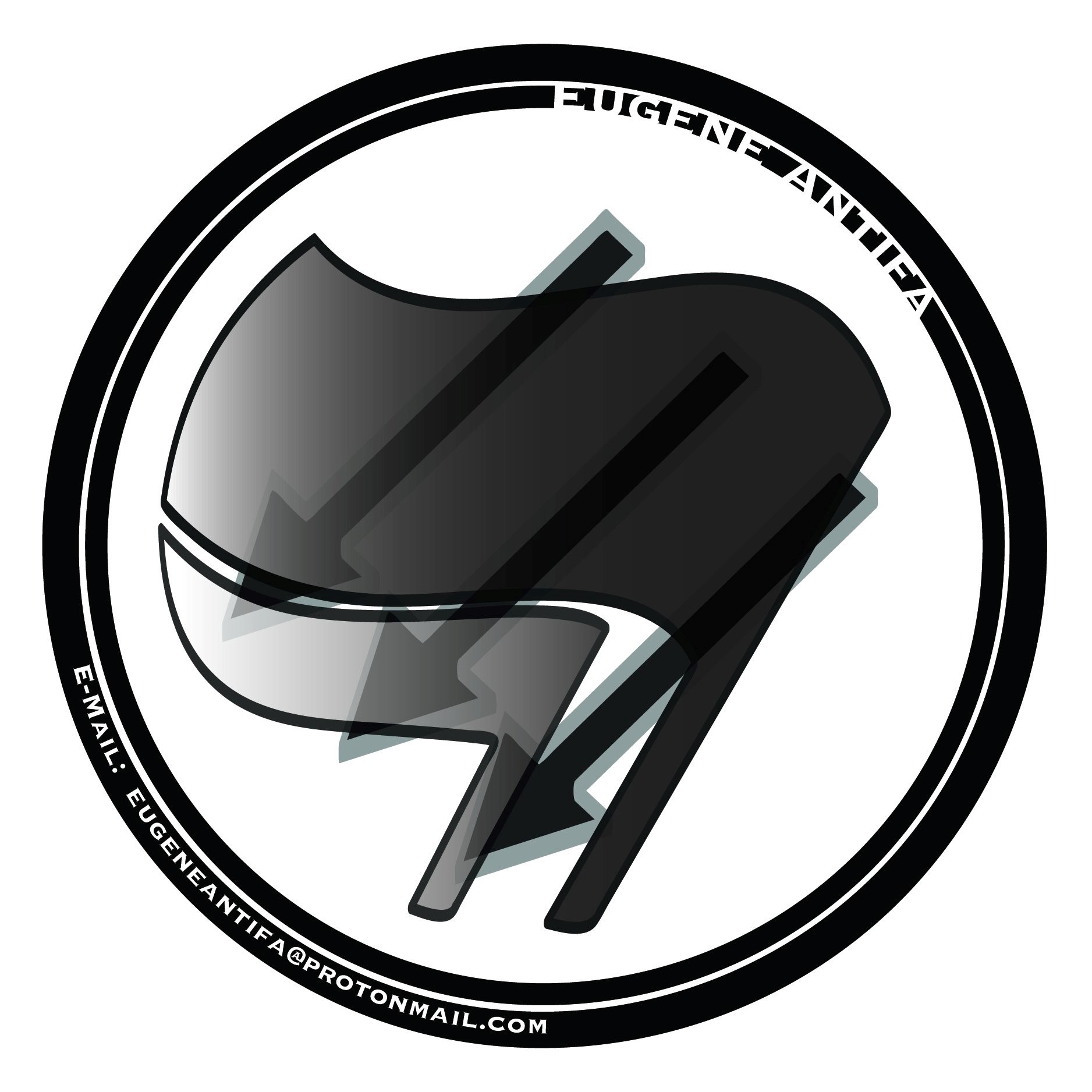